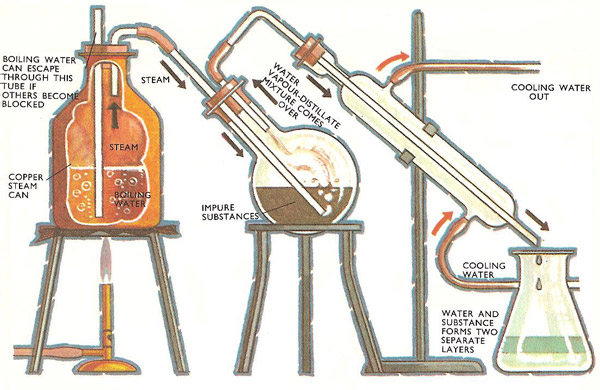 If a substance has a high boiling point, but does not mix with water, it can be distilled over at a temperature below 100°C by bubbling steam through it.

Organic substances are rarely made pure in one single process. Usually the first preparation results in a mixture containing a host of unwanted substances which have to be removed at a later stage.

Distillation often provides the answer. But ordinary distillation has certain drawbacks. Crude chlorobenzene, (C6H5Cl), with its many tarry impurities, presents this problem. Its boiling point is high (132°C), and therefore it must be heated strongly for distillation to begin. Some of the impurities start to char when it is strongly heated. Instead of boiling and bubbling gently, the contents start erupting and bumping and the far-too-hot flask could be cracked by a particularly violent bump.

Instead of heating the distillation flask with a bunsen burner, the flask can be successfully heated by bubbling steam through its contents. The steam keeps the mixture well stirred and at a temperature of around 90°C, a watery mixture of chlorobenzene distills off, leaving the impurities behind. The chlorobenzene is insoluble in water and the two quickly separate out into two easily separated layers.

The crux of the matter is the insolubility of the chlorobenzene in water. Steam distillation will only work for substances that are virtually insoluble in water. For when two substances are immiscible in one another they are capable of quite independent behavior.

Water and chlorobenzene are immiscible. Water on its own, when it is heated, evaporates more and more until at 100°C the pressure of its vapor has risen to that of its surroundings and the water boils. Chlorobenzene on its own behaves similarly, but boils at the higher temperature of 132°C. At a particular temperature, both pure liquids exert their own particular vapor pressures.

As the total vapor pressure in the distillation flask does not depend on the amount of steam or chlorobenzene present, the chlorobenzene will continue to distill off at the same temperature as long as there is any of it present.

When the calculation is carried (for an external pressure of 740 mm of mercury) it is found that 71% of the distillate, by weight, should be chlorobenzene. This figure is verified in practice, so the steam distillation process is remarkably effective in bringing over the chlorobenzene at a temperature much lower than its boiling point.