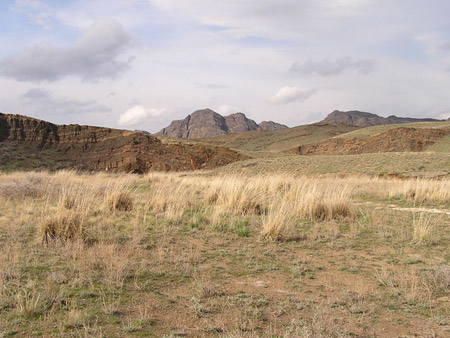 Mountains like the Andes cause the rain to be precipitated before the plains.

In some parts of the world there are large areas of land which are almost desert and which are known as steppes. It is only, however, in Asia that this geographical term is commonly applied and it is from this continent that the word originates (Russian stepi). Similar areas elsewhere have different names such as the 'Great Plains' in North America, and the 'Pampas' in South America. It is an important task of modern scientific agriculture to try and make these lands more useful to mankind.

These make up the whole of the central part of Asia. They border long strips of true deserts (in the south) and forests (in the north); in fact they separate these two extremes. The steppes of Russia have in parts a very fertile soil known as 'the black soil'. This is often found in steppe-lands and belongs to the 'pedocal' class, which means that there is not enough rainfall to remove the soluble mineral plant foods and in consequence the soil is extremely fertile. For centuries the population on the steppes of central Asia was largely nomadic, but now the steppes form the agriculture basis of the Russian economy, and heavy industries have been developed there.

Travelers in airplanes over the western part of the United States are often struck by the huge expanses of cultivated and semi-cultivated land situated mainly on the plateaus of Colorado, Nevada, and Oregon. These regions are collectively called the Great Plains and until recently were almost barren apart from low grass and scrub.

Some of the largest areas of steppes are in South America where they have various names. In Venezuela they are called 'Ilanos', in the Amazon region they are called 'Chaco' and in the basin of Paraguay and Argentine they are called the 'Pampas'. These regions are cultivated much more than in Asia.

The main reason why steppes exist at all is because of the lack of rainfall. This is too low to enable normal or exuberant plant growth, but is too high to allow the region to become a desert. Where there is high rainfall, the steppes tend to develop into forests and jungles. Where the rainfall is less there is insufficient plant growth to bind or renew the soil. This then leads to desert formation. There are two factors which control the rainfall in steppe regions. The first is the geographic situation. Steppes are usually far inland (e.g. The Asiatic Steppes) so that most rain clouds have lost their rain by the time they arrive. If they are not far inland then they are surrounded by mountains which cause the clouds to precipitate their rain before reaching the steppes. Thus the steppes in depressions between the Caspian and Aral seas are surrounded by mountains and the weather over pampas is controlled mainly by the Andes to the west. The second factor controlling the rainfall rises out of the first. The atmospheric conditions over steppes are usually anticyclonic. This means, in effect, that high-pressure air is surrounded by low-pressure with the result that there is an ascending column of cold and dry air on the high-pressure zone, which results in cold and dry weather.