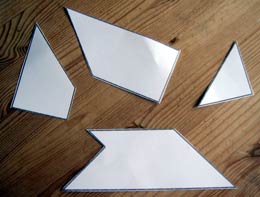 The T-puzzle is a surprisingly difficult tiling puzzle, given that there are only four pieces. It dates back to the start of the 20th century. The four pieces shown must be arranged to make a symmetric capital T. You are allowed to rotate the pieces as you wish and even turn them over, but they mustn't overlap in the final letter. In fact two different symmetric capital T letters can be made from the pieces. Also, two other symmetric shapes can be formed from the set, including an isosceles trapezoid.