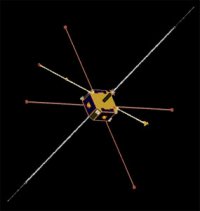 THEMIS (Time History of Events and Macroscale Interaction during Substorms) is a NASA MIDEX mission to study the onset of magnetic storms known as substorms within the tail of Earth's magnetosphere. It involves five microsatellite probes flying through different regions of the magnetosphere and observing how the storms originate and evolve. Led by Vassilis Angelopoulos of the University of California, Berkeley, THEMIS was launched by a Delta 7925-10 rocket from Cape Canaveral Air force station on February 17, 2007.