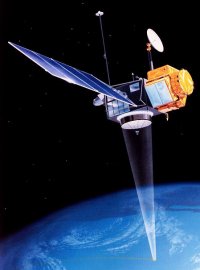 TOPEX-Poseidon was a highly successful joint American/French satellite that, for more than a decade, has provided measurements of global sea levels accurate to within 4 cm. Its results helped map ocean circulation patterns and improve our understanding of how the oceans interact with the atmosphere and our ability to predict the global climate. NASA/JPL (Jet Propulsion Laboratory) provided the satellite bus and five instruments, and was responsible for spacecraft operations; CNES (the French space agency) furnished two of the spacecraft's instruments and the launch vehicle. Much of the payload was devoted to measuring the exact height of the satellite above the ocean using a laser altimeter and correcting the altimetry data for effects such as the delay of radio pulses because of water vapor in the atmosphere. TOPEX-Poseidon proved so successful that a follow-on mission, Jason-1, was launched to extend sea-surface height measurements into the next decade. TOPEX-Poseidon ceased operating in 2006.