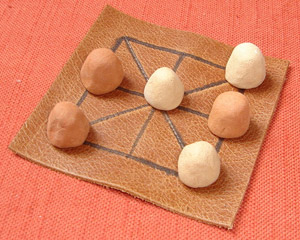 Three Men's Morris is an old game played on a three by three board that is thought to be a direct ancestor of tic-tac-toe; it is known by many other names, including Nine Holes, and is related to Six Men's Morris and Nine Men's Morris. The game involves two sets of four pieces (one set for each player), each set having its own color. Players take it in turns to place pieces on intersection points, and the first person to place three along a line wins the game. The earliest known board for Three Men's Morris was found on the roof of the temple in Kurna, Egypt, dating back almost three and a half thousand years. Its earliest known appearance in literature is in Ovid's Ars Amatoria. The Chinese are believed to have played it under the name Luk tsut K'i during the time of Confucius (c. 500 BC). Boards for Three Men's Morris dating back to the thirteenth century can be found carved into the cloister seats at the cathedrals at Canterbury, Gloucester, Norwich, and Salisbury, and at Westminster Abbey.