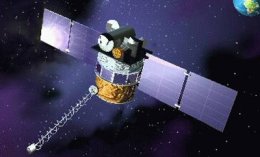 Triana is an Earth observation satellite that is part of NASA's Earth Probes program. After reaching a halo orbit at the first Lagrangian point in the Earth-Sun system, Triana will transmit full-color images of the entire sunlit side of Earth once every 15 min. These images, which will be distributed continuously over the Internet, will highlight global vegetation structure, cloud and ozone cover, and atmospheric aerosol thickness, and provide a better understanding of how solar radiation affects Earth's climate. Named after Rodrigo de Triana, the first person to see the New World from Columbus' ship, Triana was being developed at the Scripps Institution of Oceanography, San Diego. The spacecraft is currently in storage follow the disruption to the Space Shuttle program and no date has been set for its launch.