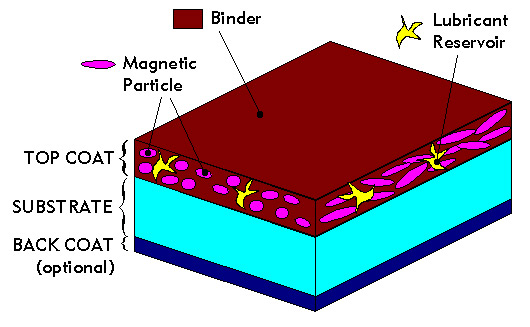 Cross section of magnetic tape. Magnetic particles are held together with a binder coated on a film substrate. Lubricant and other agents (not shown) may also be included in the top coat layer. A back coat may also be added to control friction and static charges.

A tape recorder is an instrument for sound recording on magnetic tape, and subsequent playback. The tape, consisting of small magnetic particles of iron oxides on a thin plastic film base, is wound from the supply reel to the take-up reel to the take-up reel by a rotating capstan which controls the speed. The tape passes in turn the erase head, which by applying an alternating field reduces the overall magnetization to zero; the recording head, and the playback head. Cassettes contain thin tape handily packaged, running at 17/8 inches per second. The somewhat larger cartridges contain an endless loop of tape on a single reel. Most recorders use two, four, or more tracks side by side on the tape.