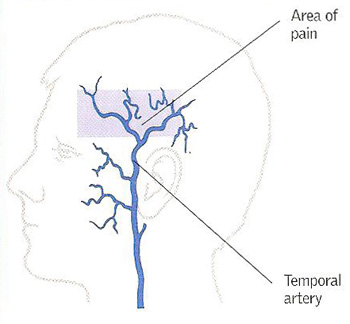 If the temporal artery is inflamed, it is usually prominent and there is a persistent severe headache and scalp tenderness in the area of the head shown above. 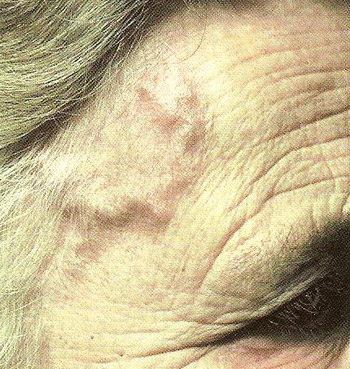 Temporal arteritis is an uncommon disease of older people in which the walls of the arteries in the scalp over the temples becomes inflamed. Other arteries in the head and neck may also be affected, as may be the aorta (the artery that carries oxygenated blood from the heart) and its main branches. The inflamed vessels become narrowed, reducing blood flow through them.

The cause of temporal amyalgia rheumatica (pain and stiffness in the muscles of the hips, thighs, shoulders, and neck).

The most common symptom is a severe headache on one or both sides of the head. The temporal artery (located at the side of the head above the earlobe) may be prominent and the scalp tender. In about half of the cases, the opthalmic arteries supplying the eyes are affected, which may cause sudden blindness if untreated. Other symptoms and signs include fever and poor appetite.

Early reporting of symptoms is essential due to the risk of blindness. The diagnosis of temporal arteritis is made by blood tests, including ESR (erythrocyte sedimentation rate), and in some cases by a biopsy (tissue sample) of the artery.

Treatment with a corticosteroid drug usually has a rapid effect; otherwise, immunosuppressant drugs may be given. Temporal arteritis usually clears up completely within two years.