When the queen termite left the nest where she was born, together with hundreds of other fertile males and females, she was little larger than the workers. With her mate she founded a nest peopled entirely by her own children. Now, her body fantastically swollen, she lives in the royal chamber with the 'king' (who is much smaller), and both are fed by the workers on their saliva. A queen termite may live for more than 20 years and will sometimes lay several thousand eggs a day. 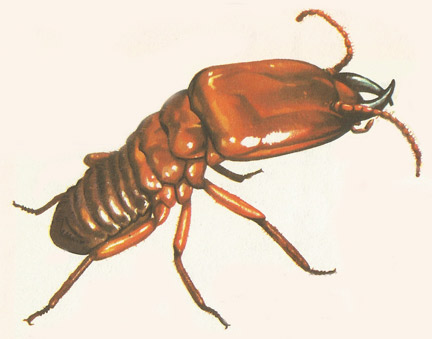 A 'soldier' of the termite species Termes bellicosus, enlarged 5 times. 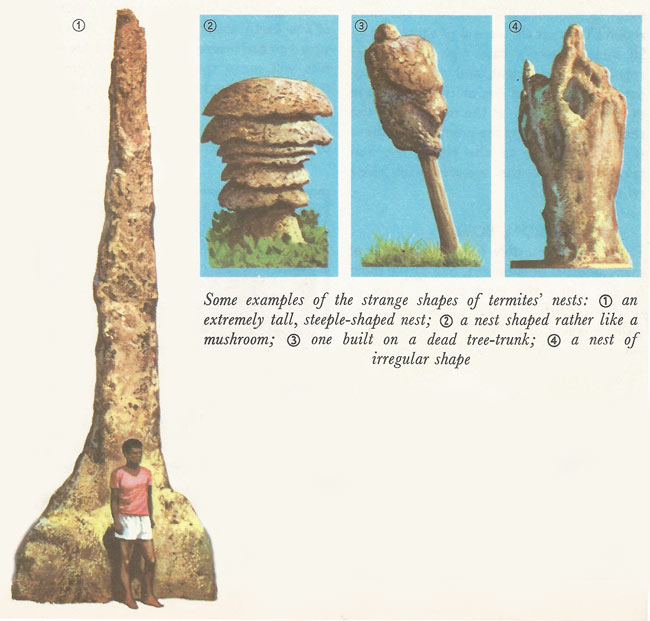 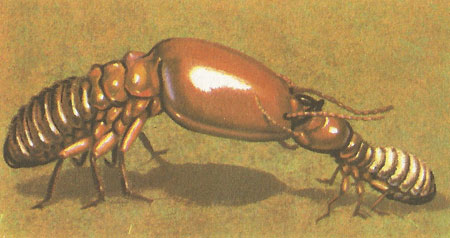 The jaws of the soldier termites are adapted for fighting; they cannot feed themselves, but depend on the workers, who give them saliva from their mouths. 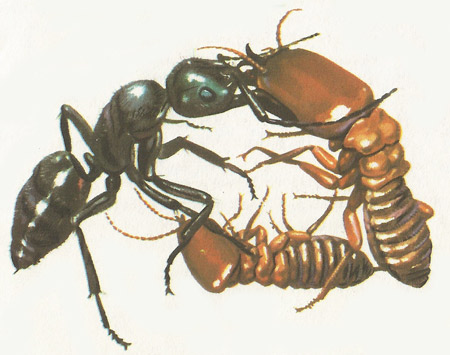 Termites and ants are perpetually at war; the ants are the aggressors and eat any termites they can kill. Some soldier termites are equipped with strong jaws to fight the ants, while the heads of others are formed like a snout and squirt a sticky liquid over their enemies which completely disables them.

A termite is any of a group of cellulose-eating insects (order Isoptera), the social system of which shows parallels with those of ants and bees. In the early days of European settlement in Australia a man returned to his home after an absence of about a week. He opened the door and sat down on a chair – and it collapsed under him as if it were made of paper. As he fell he clutched at the table, and it crumbled into a heap of splinters and dust. Staggering across the room, he collided with the door-post, which buckled and broke, bringing the whole house down about his ears, almost burying him. This sounds rather like a scene from a funny film, but it is a true story, told by the Belgian writer Maurice Maeterlinck to illustrate the extraordinary powers of destruction possessed by the feeble-looking little insects called termites.

In some tropical regions, especially in Africa and Australia, the nests of termites are a conspicuous feature of the landscape. The largest are tall, steeple-like structures up to 20 ft high and 50 ft around the base. Some Australian nests of this type are flattened, with the broader sides always facing east and west, and the makers are known as 'compass termites'. Other nests are built in the trees, but many kinds of termites nest entirely underground. The building material is earth or rotten wood or, quite frequently, the insects' own excrement. The big above-ground nests are built of a kind of cement made of saliva and clay which sets extremely hard. Inside, the nest consists of a system of tunnels and chambers, the largest of which are inhabited by king and queen. The temperature and humidity are kept constant and rather high, and there are no permanent openings. If a column of workers leaves the nest at night to forage for food, they close up the exit holes as soon as they return. Termites live and thrive in what we should regard as a perpetual fug.

Most termites are pale-colored, soft-bodied insects, only the head and jaws being hard and usually reddish-brown. The fertile males and females that periodically swarm out of the nest have two pairs of delicate gauzy wings. The soldiers, which defend the nest, have large heads and powerful jaws.

Termites are often called 'white ants'. It is true that they look rather like ants and live in a similar way in huge communities, but they are not just a special kind of ant; they are not ants at all. Ants are allied to bees and wasps, and with them belong to the insect Order Hymenoptera. The termites form an Order of their own, the Isoptera; Their nearest relatives among the other insects are cockroaches. The life-history of a termite shows that it is an entirely different type of insect from an ant, for it does not pass through larva and pupa stages as ants do. When a termite hatches from the egg it is like an adult in most respects except size. It grows, as all insects do, by successive skin-changes, but undergoes no important change of form, except that it may grow two pairs of long gauzy wings.

Termites, like ants, are social insects; that is, they live in communities. All social insects have a 'caste' system, whereby the work of the community is done by numerous sterile individuals and reproduction is confined to one or a few 'queens'. In an ants' or bees' nest all the workers are females, and the queen mates once and never sees her mate again. In a termites' nest the king and queen live together, and the workers are sterile males and females.

Termites are mainly tropical insects, and are found in Africa, Asia, America, and Australia. One or two species live in southern Europe. The termites, or Isoptera, are the only insect order not represented in Britain.

Termites are exclusively vegetable feeders, and many kinds live entirely on wood, usually dead wood; it is this, of course, that makes them so destructive. These wood-eating insects seldom or never venture into the open. If they live underground, they simply burrow to the underneath of a fallen tree or the foot of a post and eat their way into it. Those that seek their food above ground often build little covered galleries which run over the ground away from the nest, like roads leaving a city. Some cultivate fungi for food in their underground nests, just as certain ants do.

The termites' nest nearly always has other inhabitants besides the termites that made it. Many of these are insects - for example, the curious wingless fly, Termitometopia, whose maggots or larvae live in termites' nests in South Africa. The curious thing in this case is that the worker termites feed these maggots from their mouths, just as they feed the king and queen and soldiers of their own community; they treat them, in fact, as pets. Both ants and termites have pampered guests or pets of this kind in their nests, and in many cases it has been shown that they provide a liquid substance which the termites or ants eagerly lick up.

Several different kinds of reptiles are found living in termites' nests or burrowing under them. These include geckos, the legless lizard Amphisbaena, and the snake Typhlops.