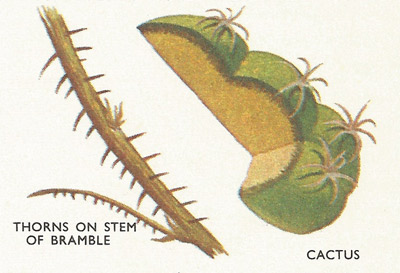 Cactus spines are outgrowths of the plant epidermis. Thorns or emergencies of bramble are climbing devices.

Some plants are equipped with tough, sharp-pointed structures capable of inflicting irritating, even painful, wounds – the prickles, needles, thorns, and spines of everyday language. A careful inspection will show that, though often very similar in design, spines in fact have been adapted from completely different structures.

In the hawthorn tree and the sloe the sharp, woody spines, so unpleasant to gatherers of may-blossom or collectors of sloes, are very small secondary stems – dwarf branches. They develop from axillary buds on an ordinary stem the same as any other branches. But instead of increasing in length and girth, they stop their growth and remain short, pointed structures. Despite their size, however, leaves may be supported, providing further evidence of their true origins.

It is the true leaves in other plants that are modified into spines. The barberry, for instance, has some of its leaves replaced by long spines. Gooseberry bushes are spinous because of pointed outgrowths from the leaf-base. In the false acacia the stipules, usually tiny outgrowths at the base of a leaf stalk, are modified into spines. Another possibility is for the margins of the foliage leaves to become drawn out into tapering extensions made rigid by the abundance of mechanical tissue – as in holly and thistle.

The decurved thorns of the blackberry and the rose are outgrowths of the stem called emergencies. Unlike true branches, they do not arise from buds in the axils of leaves. Spines covering the cactus are simply outgrowths of the epidermis: they are plant hairs.

Gorse – the prickly bush of heathlands, conspicuous by its bright yellow flowers – possess both leaf and stem spines. The leaf is short, cylindrical and ends in a point. Emerging from the axil of the leaf is a dwarf branch almost exactly identical in appearance, also with a point. To confuse the arrangement even further, the dwarf branch itself may carry more spiny leaves.

Most prickly plants live in dry or moderately dry climates or places where water is soon drained from the soil. Moisture is at a premium – the surface area of the plant over which water can be lost becomes lowered. Commonly this means a reduction in the surface area of leaves, giving them a spiny appearance. Gorse supports this view – if grown in moist conditions few or no spines appear and normal foliage leaves are produced. The disappearance of leaves altogether, with the subsequent development of other photosynthetic structures is also an advantage in dry conditions. Such structures, usually possessing far more mechanical tissue than leaves, are not so likely to shrink on drying.

The development of other types of spine commonly seems related to a plant's tendency to increase its woody tissue in times of low water supply but certainly once forward, the woody spines do afford protection.

The thorns of bramble and rose, however, have nothing to do with conditions of drought – their primary function is to assist climbing.