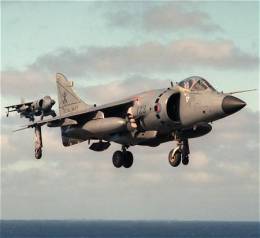 A VTOL, or Vertical Takeoff and Landing, is a plane that can lift-off and land vertically like a helicopter; the term is now chiefly associated with "jump-jet" systems in which the exhaust gases of horizontally-mounted jet engines can be deflected downward. The British Hawker Harrier military strike plane, capable of supersonic speeds in level flight, is the best-known example.