video recording and reproduction to 1980 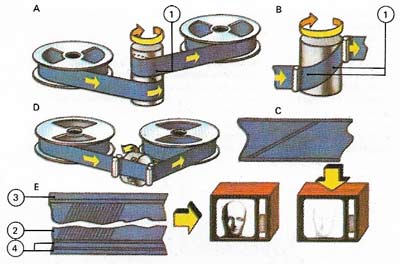 Fig 1. Videotape may move in a helix round a rotating drum having either one (A) or two (B) record/replay heads (1). The combined motion of tape and head produces diagonal video tracks (C). Transverse scanning (D) uses four heads on a horizontally spinning drum to produce tapes recorded as in (E) with video tracks (2), an audio track (3) and picture control tracks (4). Both systems have high "writing" speeds. 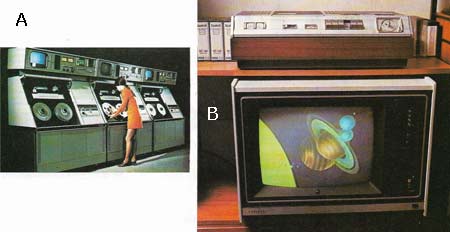 Fig 2. The moving head was invented by a little-known company in Redwood, California, in 1956, as a means of achieving the high tape-to-head speed required for video recording without the tape itself having to move at unmanageably high speed. The latest Ampex machine (A) is a self-contained videotape recorder designed for color television. The studio videotape recorder is expensive and heavy and many manufacturers, foreseeing a wide marker for a cheaper and smaller machine suitable for home, school, police, and other work, have made cassette videotape recorders that are compact and efficient, yet not too costly. This cassette player (B) is a typical example of such a model. 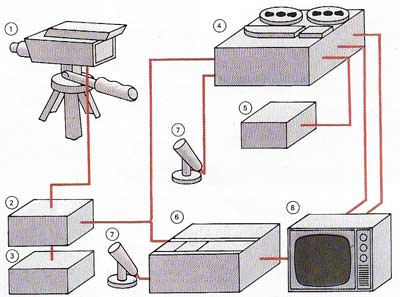 Fig 3. Live video recordings in black-and-white or color can be made with ease today. The diagram shows a typical setup using equipment that is readily available on the market. The camera (1) is connected via its control (2) and sync (3) units to the reel-to-reel color videotape recorder (4) (with color pack (5)) or, more commonly, to the videocassette recorder (6). A microphone is simultaneously connected to record the accompanying sound (7). The color TV set (8) has special sockets to enable it to be used as a monitor during recording. Recorded tape can be played back through the TV set immediately after the tape is wound back. 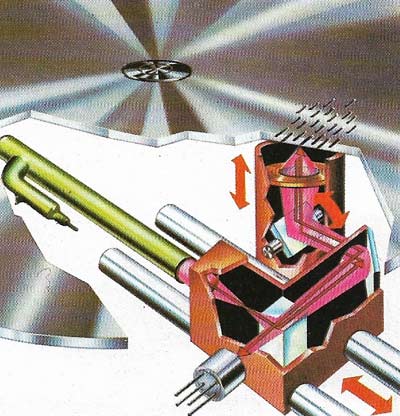 Fig 4. The non-magnetic video disk was used by several firms as an alternative to magnetic tape systems. Philips and other companies have designed systems that use minute elliptical depressions on a 30.5 cm (12 in) disk to record color video signals with sound. It is scanned using a laser beam. 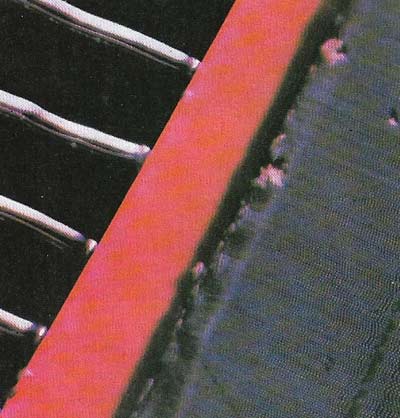 Fig 5. The Teldec (Teiefunken/Decca) videodisk shown much magnified (right), had about 25 hair-line grooves in the space occupied by each groove on a standard LP gramophone record (left). Like the Philips videodisk the disk revolved at 1,500 rpm (UK) or 1,800 rpm (US).

From the earliest days of the television industry, there was a need for a method of recording programs in such a way that they could be played back immediately. Cinema film is often unsuitable because the delay in processing prevents it being shown immediately, and the fact that film cannot be reused makes it expensive.

A Scotsman, John Logie Baird (1888–1946), inventor of a mechanical television scanner, was the first man to record a moving picture by other than photographic means. In 1927 he used equipment designed for cutting 10-in (25.4-cm) 78 rpm sound records to record pictures using the output of his 30-line TV scanner.

The development of magnetic tape recording meant that Baird's aim could be achieved more simply with immediate replay. In the meantime, however, television had progressed from the first 30-line format to a picture having 405 to 819 lines. The best of the early shellac records could reproduce audio (sound) signals up to a frequency of about 4,500 hertz (Hz), and high-fidelity LP records today reproduce musical overtones up to 15,000 Hz or more. But a modern TV signal includes frequencies up to 5 MHz.

The frequency response of a magnetic tape recorder is limited by the size of the head gap and the speed with which the tape passes the head. The finest equipment operating at 19 cm (7.5 in) per second cannot reproduce frequencies much above 25,000 Hz. An increase in frequency response to 5 MHz can be achieved only by increasing the tape-to-head speed to at least 1,270 cm (500 in) per second.

The earliest videotape recorders (which record pictures on magnetic tape just as a tape recorder records sound) were designed to operate at tape speeds of 254 cm (100 in) per second or more. They required enormous spools of tape and presented speed control problems; also constant head-to-tape contact was difficult to achieve. Research led to the introduction by Ampex, in 1956, of the first transverse-scan recorder – the system used professionally today. In this system, the tape, normally 5.08 cm (2 in) wide, moves at either 38 cm (15 in) or 19 cm (7.5 in) per second. Four record/replay heads mounted on a drum sweep across the tape producing transverse parallel record tracks for the video signal (Fig 1). Linear tracks at the edges of the tape are used for tape-speed control, picture cueing and sound. Head-to-tape "writing" speeds of 3,810 cm (1,500 in) per second are achieved.

The highly sophisticated transverse-scan color videotape recorder is far too expensive for institutional and domestic use. A cheaper method uses what is termed helical scanning. Here the tape passes in a helix around a rotating drum into which one or more record/replay heads are built (Fig 1A, B). The drum is rotated, usually in the opposite direction to the tape (it "slips" round within a loop of tape). As the tape rises by its own width in its journey around the drum, the heads sweep across the tape at an acute angle. Tape-to-head "writing" speeds of up to 2,540 cm (1,000 in) per second are achieved with helical-scan portable videotape recorders. In domestic applications, this system has the advantage that a conventional TV can be used as a combined picture and sound monitor, the signal produced on replay being fed into the aerial socket via a modulator. Tape 1.27 cm (0.5 in) wide is commonly used, although some recorders of this kind use 6.35 mm (0.25 in), 1.9 cm (0.75 in) or 2.5 cm (1.0 in) tape. The speed-control mechanisms on these machines are less sophisticated, and generally use servo motors in much the same way as those on studio machines.

It is possible for magnetic tape to be replaced by magnetic discs in video recording, and the system has the advantage of giving rapid access to any part of the recording for immediate replay, in slow motion if necessary. But a disadvantage is that playing time is short – generally 15–18 seconds using both sides – whereas videotape recorders offering eight hours of playing time from a single cassette are now available.

The production of prerecorded TV tapes is expensive and so some manufacturers have been developing video machines that use disks similar to gramophone records. Such machines are not recorders, but replay programs on mass-produced disks.

There are two kinds of such video disks, which differ in the "pick-up" used to extract the recorded information. In a system developed by Philips, MCA in the United States and other companies there are small elliptical depressions in the disk (6). The disk revolves at 1,500 revolutions per minute (for a 50 Hz electricity supply) or 1,800 rpm (for a 60 Hz supply). A laser beam scans the lower surface of the disk and the reflected beam becomes modulated and provides video and sound signals for 25 or 30 television pictures per minute (normal rates of transmission). A disk 30.5 cm (12 in) in diameter records up to two hours' television. It can provide slow motion or "stationary" pictures.

The discontinued video disk developed by Telefunken and Decca was grooved like a gramophone record (Fig 5), although the grooves were finer and spaced much closer together. The main rival to this system is the JVC VHD disk, which is 'read' by a tiny stylus instead of a laser beam.