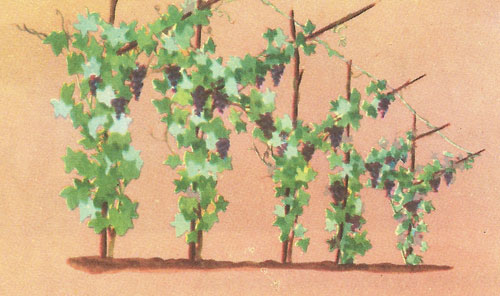 Botanically, vines are classified in the family Vitaceae. There are two genera that produce grapes, Vitis and Muscadinia. Vitis vinifera is the European vine, and Muscadina rotundifolia. a native of America, produces the muscadine grape.

Roots of the grapevine. 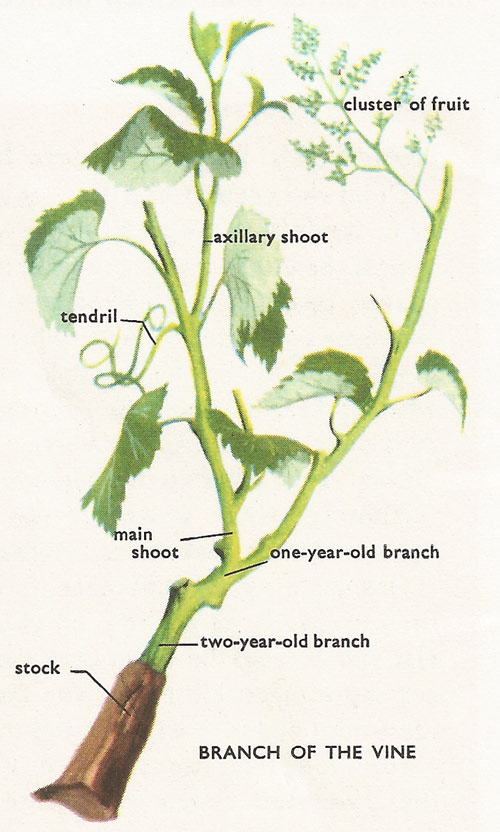 Branch of the grapevine. 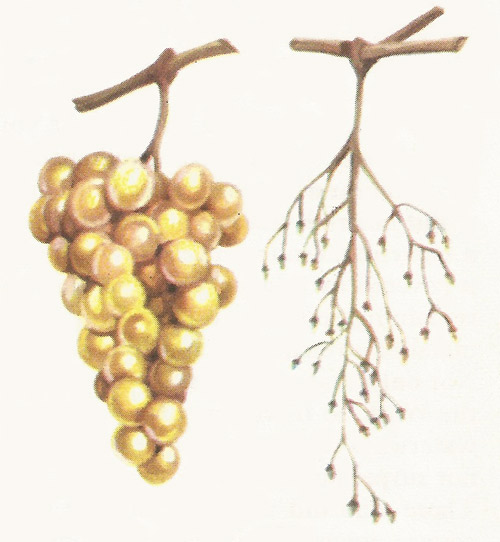 The fruit of the vine is called a grape. This is how the fruit cluster appears before and after picking the grapes. 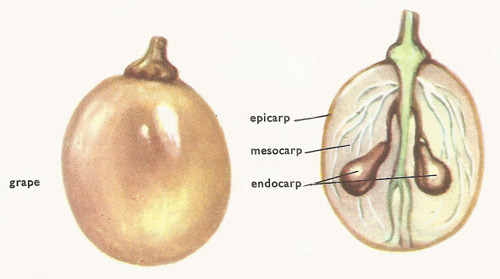 In the grape or berry we can make out three distinct parts: the skin or epicarp; the pulpy mesocarp, containing the juice or 'must', rich in sugars and acid; and, lying within this, the pips or seeds which form the endocarp.

This is how the leaves are arranged on the stem. 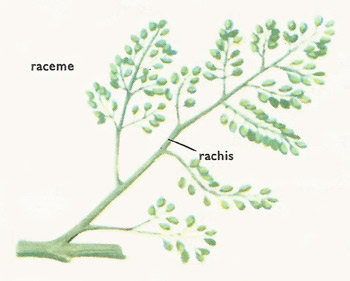 Inflorescence of the vine.

Methods of pruning and shaping vines.

Grape-vines – that is, plants of the family Vitaceae – are widespread in the temperate parts of the northern hemisphere; the largest number of species are native to North America. The European grape-vine, Vitis vinifera, is the best-known species and has been cultivated longer than any other.

Grapes, the fruit of the vine, have been used by man from very early times. Recognizable grape-seeds have been found in tombs in Egypt dating from about 1000 BC, and grapes may also have been used in the Swiss and Italian lake-dwellings of the Bronze Age. The earliest use of grapes must have been as food, but the practice of fermenting the juice to make wine is very ancient. It was probably started in one of the Mediterranean countries between 2000 and 1000 BC, but there are no exact records. In classical Roman times the vine was already intensively cultivated, and in the Roman code of laws called the Twelve Tables (450 BC) severe penalties were laid down for theft in vineyards.

The vine requires a climate with a long, hot summer if the fruit is to ripen satisfactorily. The countries of southern Europe provide this climate ideally, and France and Italy are the largest producers of wine. Vines are also grown on a large scale in South Africa, Australia, Chile, and the warmer parts of the US. They will grow in Britain, but here the fruit only ripens in the open in the hottest summers.

During the 19th century the European vine industry was threatened with disaster: new kinds of vines were introduced from America, and with them various pests and diseases native to the vines of that continent. These attacked the European vines, which, having no inherent immunity to them, suffered very severely, whole vineyards being destroyed.

Some of the diseases were caused by fungi, but one of the worse pests was an insect called Phylloxera, which attacks the roots. It was found that the best protection was obtained by planting stocks of native American vines which, although poor producers of grapes, were immune to the attacks of the pest, and grafting European vines on to them. Since the roots are part of the stock, the whole plant is then able to resist the insect's attacks.

It must not be assumed from this that all American native species are useless as producers of fruit. Although the grape-growing industry of California is founded on the European species Vitis vinifera, that of the eastern United States has been developed from a variety of native species.

The root of the vine varies according to the species and the way in which the plant is propagated – i.e. from seeds, buds, or cuttings.

The stem of the vine is formed of the stock and of the branches which rise from it. At intervals along the branches there are more or less thickened nodes.

The leaf-buds grow out of these nodes, and at about the third or fourth node a leaf forms on one side, and on the other side either a cluster of fruit or a tendril.

From some of the nodes, at which a leaf has grown, secondary shoots or branches, called axillary shoots, grow out. In a warm climate these can produce clusters of fruit which will ripen later than those on the main branches, and so a double harvest is obtained.

The tendrils grow out on the sides of the nodes opposite the leaves. They wind round the branches of trees and shrubs, or artificial supports, and enable the vine to support itself and climb upwards.

The flowers of the vine are arranged in an inflorescence called a raceme. Each flower is carried on a stalk or pedicel which is expanded where it meets the calyx.

The calyx consists of five small teeth, the sepals; the corolla of five petals, which are joined at the top, forms a sort of hood. When the flower is fully developed the hood falls off, revealing the five stamens, which carry the pollen and the central pistil, shaped like a tiny flask. In some kinds of vine stamens and pistils are borne on separate flowers.

The fruit of the vine is called a grape. This is how the fruit cluster appears before and after picking grapes.

In the grape or berry we can make out three distinct parts: the skin or epicarp; the pulpy mesocarp, containing the juice or 'must', rich in sugars and acid; and, lying within this, the pips or seeds which form the endocarp.

Both the size and shape of the seeds vary according to the species of vine.

The seeds contain an oily substance (10 to 20% by weight) which supplies nourishment for the embryo at the time of germination.


Pruning and shaping the vine

Pruning is an operation by which certain of the woody and herbaceous parts of the plant are cut away. Among other things, its purpose is to give the vine a definite shape designed to make the best use of space and the easiest conditions of work in the vineyard.

The grape has a high nutritional value, mainly on account of the sugars it contains. These are glucose and fructose, both of which can be easily and immediately assimilated by the human body. The grape contains around 20 percent of these sugars, and this, in terms of energy, works out at about 360 calories per pound of grapes (a man doing normal work requires 2,400 to 2,500 calories daily). In addition to sugars, a variety of nutritionally valuable elements is found, including phosphorus, potassium, iron, copper, calcium, magnesium, cobalt, and zinc. These are all essential to our health, although some are required only in minute quantities.

In addition the grape contains vitamins A, B1, B2, and C.