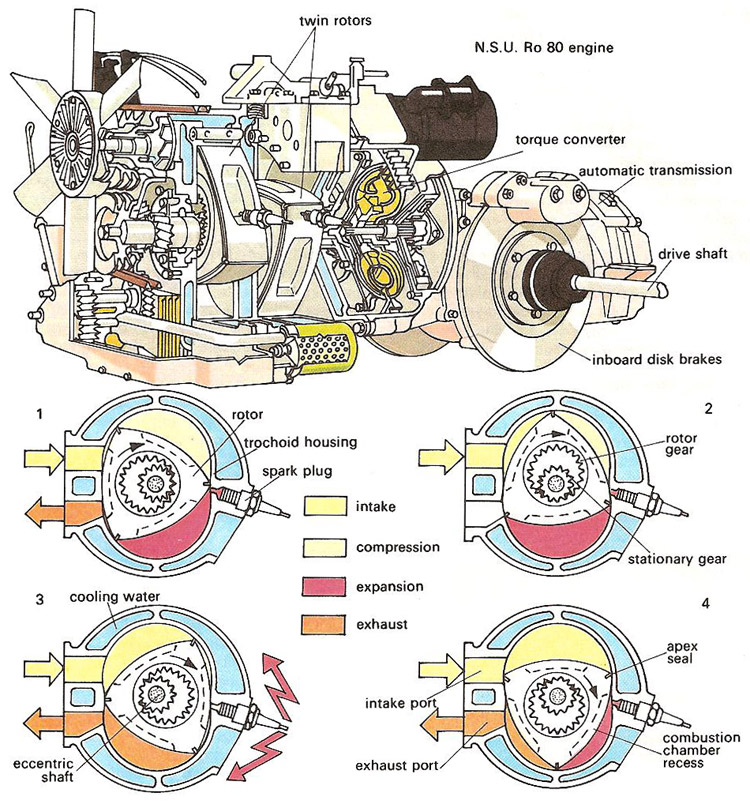 Top: cutaway of an automobile engine with automatic transmission, based on the NSU Ro 80 engine. This engine has two rotors and is mounted longitudinally, forward of the front (driving) wheels. Above: stages in the working cycle of a Wankel engine. Actually, each of the three combustion chambers on each rotor follows its own working cycle of intake, compression, combustion, and exhaust, at phase angles 120° before and after its fellows.

The Wankel engine is an internal combustion engine that produces rotary motion directly. Invented by the German engineer Felix Wankel (1902–1988), who completed his first design in 1954, it became widely used in automobiles and airplanes, and continues to be used in various forms today. A triangular rotor with spring-loaded sealing plates at its apexes rotates eccentrically inside a cylinder, while the three combustion chambers formed between the sides of the rotor and the walls of the cylinder successively draw in, compress and ignite a fuel-and-air mixture. The Wankel engine is simpler in principle, more efficient and more powerful weight for weight, but more difficult to cool, than a conventional reciprocating engine.