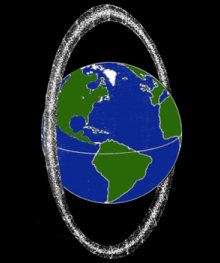 West Ford was a passive communications concept developed by the Massachusetts Institute of Technology Lincoln Laboratory for the Department of Defense in 1963. The reflector was to consist of a belt of 480 million hair-thin copper filaments each about 0.75 in long. Radio astronomers opposed the idea, believing it might affect their research. However, the copper cloud quickly dispersed rendering it no threat to astronomy.


Background to the project

At the height of the Cold War in the late 1950s, all international communications were either sent through undersea cables or bounced off of the ionosphere. The United States military was concerned that the Soviets (or others) might severe the cables, forcing the unpredictable ionosphere to be the only means of communication with overseas forces. The Space Age had just begun, and communications satellites will only a remote vision. Nevertheless, the US military looked to space to help solve their communications weakness. Their solution was to create an artificial ionosphere; Project West Ford, launched in May 1963, resulted in the formation of globe-encirling ring. The engineers behind the project hoped that it would serve as a prototype for two more permanent rings that would forever guarantee their ability to communicate across the globe.


Ring around the world

The first West Ford launch ended in failure, but the second went off without a hitch on May 10, 1963. Inside the West Ford spacecraft, the needles were packed densely together in blocks made of a naphthalene gel that would rapidly evaporate in space. The entire package of needles weighed only 20 kg. After being released, the hundreds of millions of copper needles gradually dispersed throughout their entire orbit over a period of two months. The final donut-shaped cloud was 15 km wide, 30 km thick, and encircled the globe at an altitude of 3,700 km.

The West Ford copper needles were each 1.8 cm long and 0.0018 cm in diameter and weighed only 40 micrograms. They were designed to be exactly half of the wavelength of 8000 MHz microwaves. This length would create strong reflections when the microwaves struck the copper needles, in effect making them tiny dipole antennae each repeating in all directions the exact same signal they received. Most of the West Ford dipoles re-entered Earth's atmosphere sometime around 1970, according to theoretical and observational evidence. The needles slowly drifted down to Earth's surface, unscathed by re-entry because of their size.