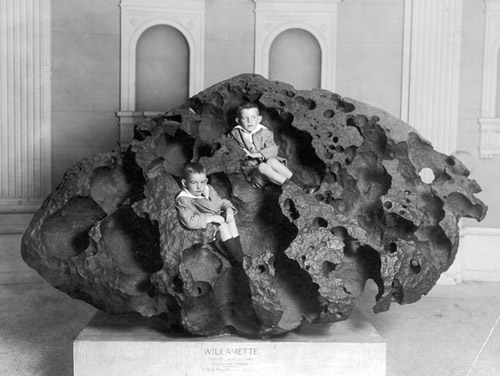 Sitting in the Williamette meteorite, 1911.

The Williamette meteorite is a 15.5-ton iron meteorite (type IIIA) that is the largest meteorite ever found in the United States. It was found in 1902 near Oregon City in Clackamas Co., Oregon.

Aside from its size, its most striking features are a well-defined nose-cone shape and a deeply pitted rear surface, the pits and grooves having been produced by weathering of the exposed surface of the meteorite in the wet Oregon climate.

Its name comes from the fact that it was purchased in 1906 for the American Museum of Natural History in New York by Mrs. William E. Dodge.