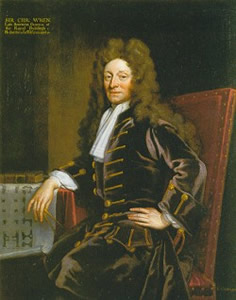 Christopher Wren was the greatest of English architects. He had a brilliant early career as a mathematician and professor of astronomy, Oxford (1661–73), and was a founder member of the Royal Society of London (president 1681–83). In 1663 he turned to architecture, in which he was largely self-taught. After the Great Fire of London (1666) Wren was appointed principal architect to rebuild London, where he was responsible for 52 churches, all of different design. His greatest building was the new St. Paul's Cathedral, noted for its monumental Baroque facade. He also worked at Greenwich (see Royal Greenwich Observatory, Oxford, and Cambridge.