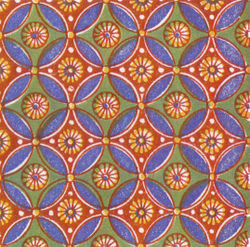 A wallpaper group, also known as a crystallographic group, is a distinct way to tile the plane that repeats indefinitely in two dimensions; that is, a collection of two-dimensional symmetric patterns on a plane surface, containing two nonparallel translations (see periodic tiling). There are only 17 kinds of these patterns, known as isometries, each uniquely identified by its translation and rotation symmetries, as discovered in the late 19th century by E. S. Fedorov and, independently, by the German A. M. Schoenflies and the Englishman William Barlow. Thirteen of the isometries include some kind of rotational symmetry, while four do not; twelve show rectangular symmetries, while five involve hexagonal symmetries. Every two-dimensional repetitive pattern in wallpaper, textiles, brickwork, or the arrangement of atoms in a plane of a crystal is just a minor variations on one of these 17 patterns.