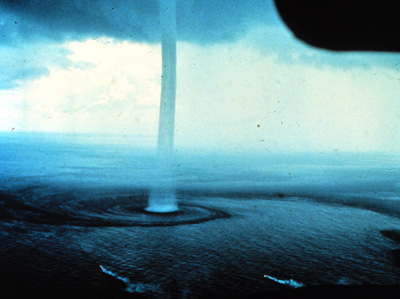 A waterspout off the Florida Keys in 1969. Photo credit: Joseph Golden, NOAA. 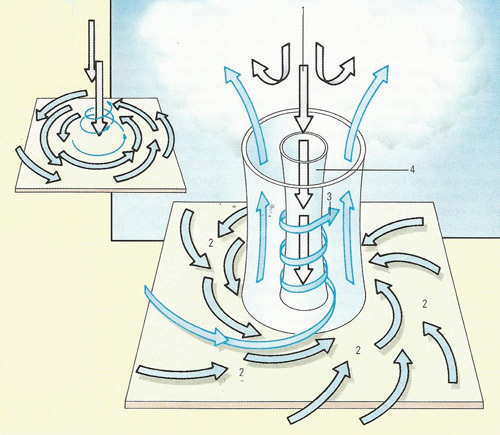 A waterspout occurs when a tornado passes over water, sucking up a column of water up to 100 m (330 ft) tall. They usually occur in tropical regions, associated with stormy weather. Falling cold air (1) causes a localized area of low pressure into which warm air spirals, with resultant strong winds (2). Surface water is drawn up (3) into a column around the core of the waterspout (4).

A waterspout is an effect of a rotating column of air, or tornado, as it passes over water. A funnel-like cloud of condensed water vapor extends from a parent cumulonimbus cloud to the water surface, where it is surrounded by a sheath of spray. Waterspouts can be as dangerous as tornadoes and may involve wind speeds in excess of 200 km/h. Many waterspouts form away from thunderstorms and even during relatively fair weather. They can be relatively transparent and initially visible only by the unusual pattern they create on the water. Waterspouts are generally less than 30 m (98 ft) in height, and may last for half an hour or so. They have been known to cause great damage to shipping and coastal installations.