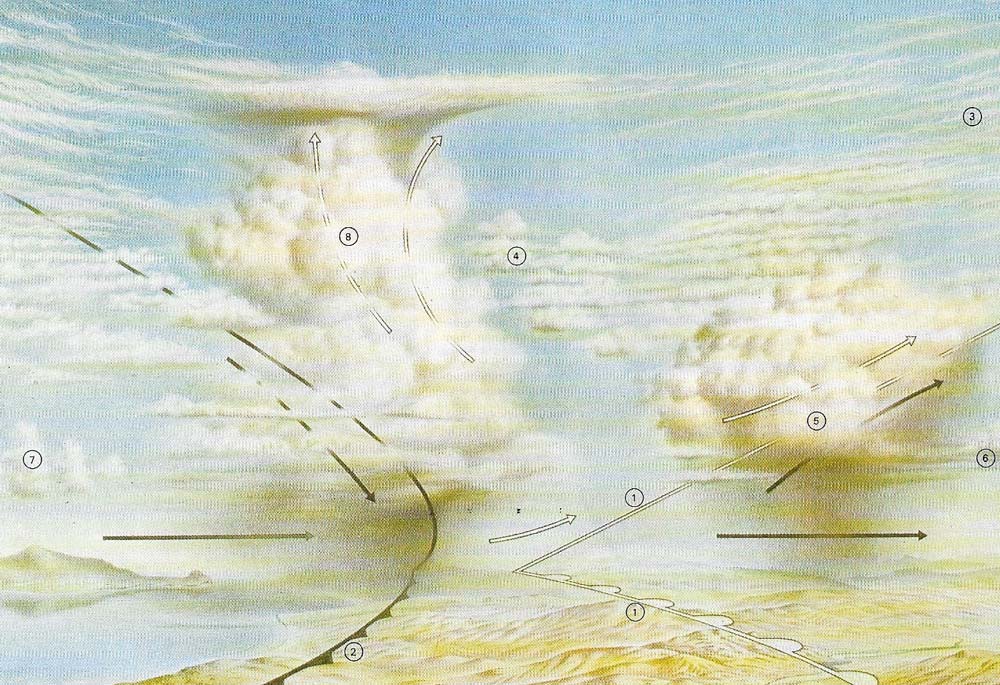 The different cloud types are best illustrated within the context of the familiar mid-latitude frontal depression. Most of the major types occur within such cyclones. Here a schematic, generalized Northern Hemisphere depression is viewed from the south as it moves from west (left) to east (right). It is in a mature state, prior to the occlusion stage, and both warm (1) and cold (2) fronts are clearly visible. Over the warm front, which may have a slope ranging from 1/100 to 1/350, the air rises massively and slowly over the great depth of the atmosphere. This results in a fairly complete suite of layer-type clouds ranging from cirrus (3) and altocumulus (4) to nimbostratus (5). The precipitation area often associated with such cloud types, and especially with nimbostratus, usually lies ahead of the surface warm front and roughly parallel to it (6). Turbulence may cause some clouds to rise and produce heavy convective rainfall, as well as the generally lighter and more widespread classical warm front rainfall. Stratus often occupies the warm sector, but a marked change occurs at the cold front. Here the wind veers (blowing in a more clockwise direction) and cumulus clouds (7) are often found in the cold air behind the front. At the front itself the atmosphere is often quite unstable and cumulus clouds grow into cumulonimbus formations (8). The canopy of cirrus clouds – of all types – may extend over the whole depression and is often juxtaposed with the anvil shape of the nimbus. These cloud changes are accompanied by pressure, wind temperature and humidity changes as the fronts pass the individual observer on the ground. 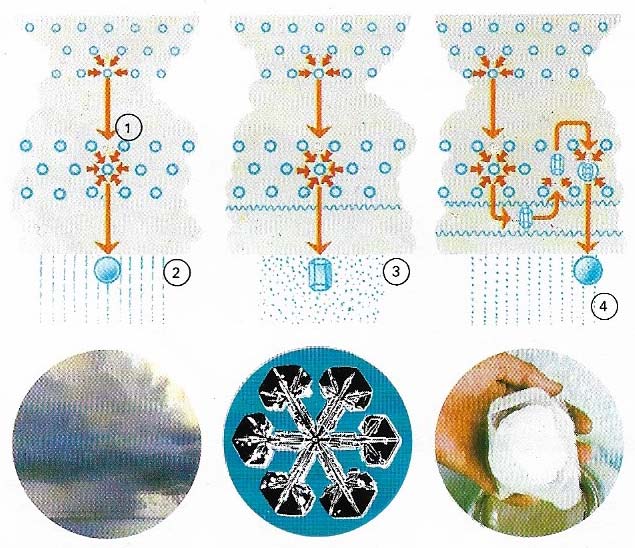 Fig 1. Repeated coalescence of droplets (1) forms drops (2) too large to float on air currents. Ice crystals collect in hexagonal patterns (3) then agglomerate into snowflakes. Water can freeze round an ice embryo (4) to form hail. 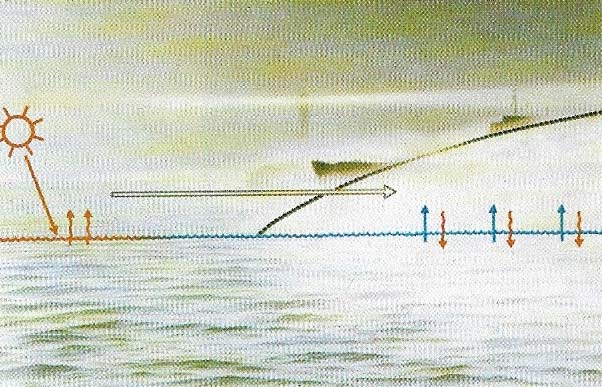 Fig 2. Advection fog is caused by warm, damp air blowing over cold land or water. In warmer latitudes, heat rises to warm the air above (upward blue arrows). When the air passes into cooler areas, it loses heat (blue arrows and upward red arrows) and as the temperature of the air reaches des point, for gradually forms. 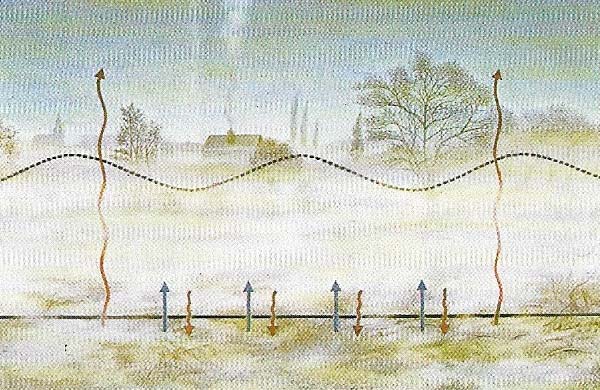 Fig 3. Radiation fog occurs when air is cooled to its dew point by contact with land that has itself been cooled by long-wave radiation loss (long brown arrows). As the ground cools, surrounding air transfers heat by conduction (short brown arrows). The cooling of the air is shown by the gray arrows. 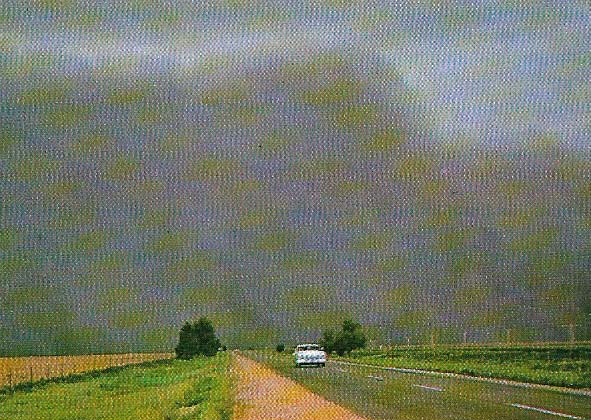 Fig 4. The power of the wind to erode and transport is well seen in this photograph of an approaching use storm in the Midwest of the United States. These storms occur only in arid areas where the soil is loose. 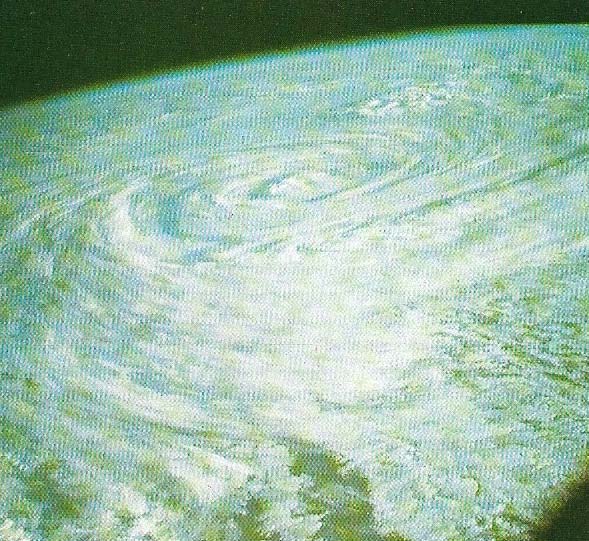 Fig 5. The structure of a hurricane may be difficult to discern at ground level but from a satellite in orbit the pattern of air movements involved can be clearly seen.

"Weather" in anybody's language means rain and sunshine, heat and cold, clouds and wind. Humidity and visibility might be added to the list. In fact, if not in terminology, this layman's catalogue comprises the six elements which, for the meteorologist, make weather: in his language they are air temperature, barometric pressure, wind velocity, humidity, clouds and precipitation.

Clouds are made up of millions of very small drops of liquid water or ice crystals that are too light to fall out of the atmosphere. The cloud particles form from air that contains water vapor when the Tempe falls to a critical level called the dew point. These liquid droplets may then freeze into an ice crystal. But before either water or ice particles can form, two things must happen. First, the moist air must rise, reducing its pressure and giving up its heat to the surrounding atmosphere. Second, dust particles must already be present on which the cooled vapor can condense to form droplets or ice crystals. These tiny particles are respectively called condensation nuclei and ice nuclei.

The formation of a cloud does not necessarily mean that it will precipitate. Condensation cannot create droplets or crystals that would survive the fall to the ground. They would evaporate even if they were large enough to overcome the force of the rising air. Two other mechanisms, the Bergeron or ice-crystal process, and the coalescence process, account for precipitation-sized particles. In clouds that contain both ice crystals and droplets of supercooled water (water at a temperature less than 0°C), the droplets evaporate and the vapor condenses on to the ice crystal. Thus the crystals grow at the expense of the droplets until they are large enough to fall out of the cloud. If they melt on the way down (as frequently happens), rainfall is observed at ground level. If the cloud contains no ice crystals, precipitation particles grow by the coalescence of different-sized droplets as they fall through the cloud. The larger a drop becomes, the more efficient it is at collecting smaller ones and the greater its chance of reaching the ground.

The two basic shapes of clouds – in layers or in heaps – are caused by the two different ways in which air can move upwards. When air rises slowly over large areas at rates of a few centimeters a second, layer or stratified clouds are formed. This frequently occurs in cyclones, particularly in warm sectors and at warm fronts. Rapidly rising air (several meters per second) occurs in convection currents which are usually only a few hundred meters across near the ground. These currents widen with altitude but the resultant heaped or cumuliform clouds are rarely more than a few kilo metres across. If the atmosphere is unstable they may grow into very large cumulonimbus clouds.

The easiest way to identify a cloud (top illustration) is by its shape and height above ground. This was recognized by Luke Howard, a London chemist, in 1833 when he presented his first cloud classification. This still forms the basis of the World Meteorological Organization's International Classification of ten cloud types, which fall into three families according to their height. The highest clouds – about 8–10 km (5–6 miles) – made of ice, are called cirrus, cirrostratus and cirrocumulus; the middle clouds – 3–8 km (2–5 miles) – of water and ice, are called alto-cumulus and alto-stratus; and the low clouds – below 3 km (2 miles) – usually made of water, are called stratus, stratocumulus and nimbostratus. The two remaining types are cumulus and cumulonimbus. There are, however, many variations on these ten types. Rarely is a cloud seen in isolation or conforming exactly to its textbook form; clouds of different types occur together and, as a result many hybrid forms are to be found.

Long periods of sunshine are, of course, marked by clear skies, which usually result from sinking air in anticyclones. The longest periods of sunshine occur in the polar summer when the sun never sets, but the highest intensities and temperatures occur in the main deserts of the world which are roughly at the latitudes 30oN and S. the daily maximum temperature in these areas may be more than 35°C (95°F), falling to below freezing at night.

Wind speed and direction at low levels are affected by friction between the air and the ground and by local topography. Friction means the wind speeds near the ground are generally less than at high levels and it also accounts for the generally higher speeds over water as compared with the rougher land surface. Air flow is often channelled in both valleys and urban areas.

There are several ways of expressing the humidity of the air but relative humidity is the most widely used. This is the percentage of water vapor held in a given volume of air relate to the amount that the air could hold if saturated at the same temperature. In middle latitudes the daily values usually lie between 60 and 80 percent, but they can range from 8 to 100 percent.

Visibility has assumed a great importance in our communications-conscious world. Fog (Fig 2, 3), which is cloudy air at ground level, presents dangers to aircraft, ships and motor vehicles alike. It can also affect people in the street; if fog becomes contaminated with pollutants it may become lethal smog.