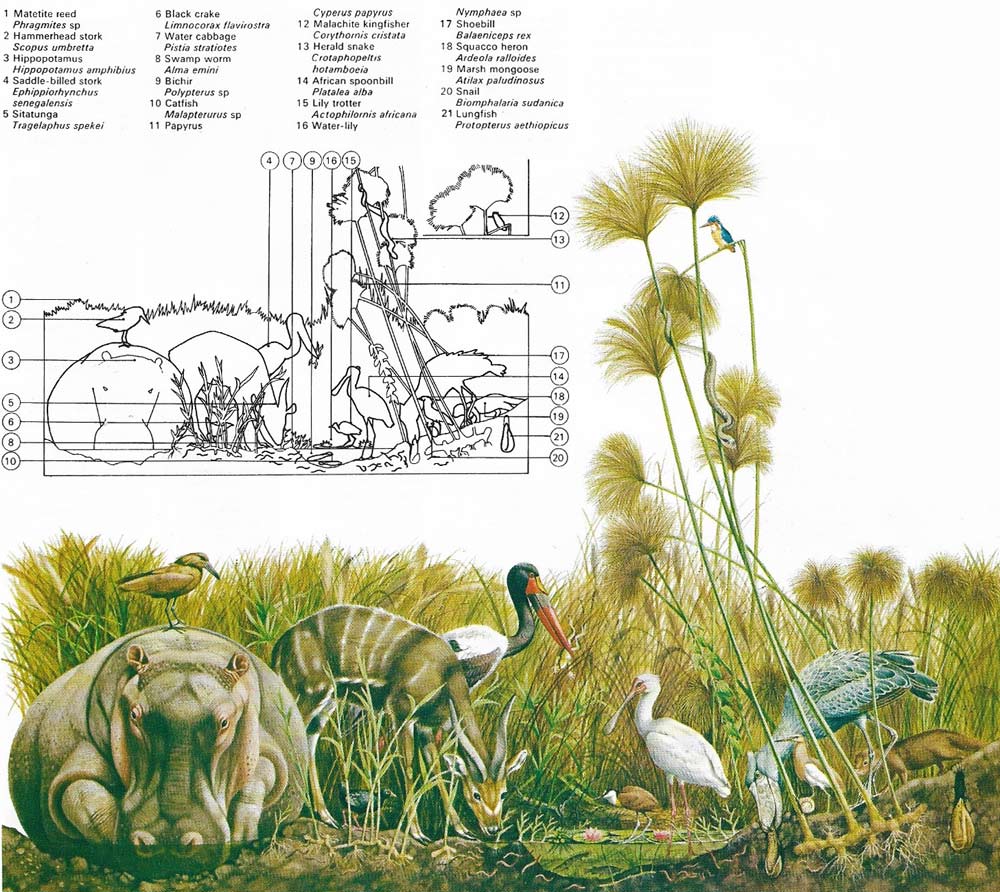 Fig 1. A swamp in the Upper Nile valley is dominated by papyrus, the paper reed, which grows to a height of 3.5 m (12 ft) or more. Other plants, which mask the open water, include water-lilies and water hyacinths. The largest of swamp animals is the hippopotamus, which inhabits shallow rivers and lakes over much of Africa. Hippos usually live in groups, leaving the water at night to feed. The sitatunga is far more secretive than the hippo and is rarely seen. If in danger it will submerge with only its nostrils showing, for long periods if need be. The many birds are almost all long-legged relatives of the herons. They feed on small animals, particularly insects, which swarm throughout the swamp. 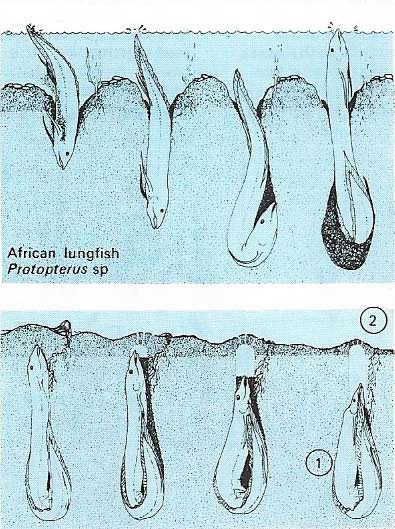 Fig 2. The lungfish is related to extinct creatures that were the first vertebrates to live on dry land. Today it is found in tropical regions of the three southern continents. The South American and Australian forms can survive complete deoxygenation of the water by breathing air. The African species (Protopterus) can live through total dehydration of its environment by burrowing into the mud while it is still damp and enveloping itself in a mucus cocoon. This dries to form a protective case (1). Air from the disturbed mud filters through a porous "lid" (2) at the top of the case. During this dormancy it lives on reserves of fat.

Fig 3. The matamata, a South American turtle, has a bossed carapace that resembles a lump of dead, waterlogged wood. The flaps of tissue that dangle from its head and neck look like inviting scraps of food to the small denizens of the unruffled tropical waters where the matamata lives. The inquisitive amphibians or fish do not discover their mistake until it is too late. I'm spite of its grotesquely flattened head. The matamata has huge if feeble jaws and a greatly distensible throat. It sucks in a huge volume of water, bearing any nearby small animals irresistibly with it.

Fig 4. Much of the vast Amazon basin is drained by meandering, swampy streams. Electric fish such as the electric eel (Electrophorus electricus) can stun their prey with charges of up to 600 volts. Here, too, lives the arapaima, the world's largest freshwater fish, weighing up to 90 kg (200 lb). Some of the nearby faster flowing waters abound with shoals of piranha, (Serrasalmus natteri) which are among the most voracious of all vertebrates. Hunting in "packs", they can reduce a human being to a skeleton within minutes. 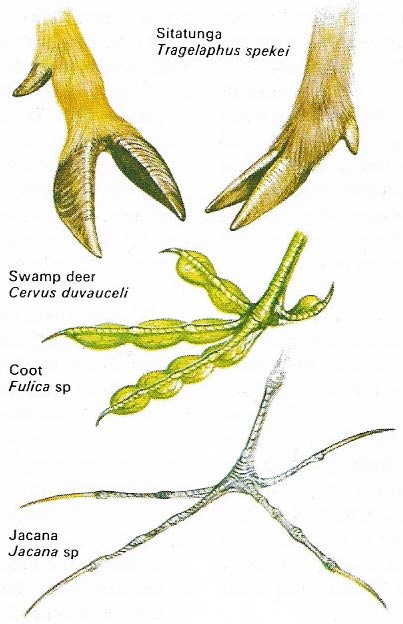 Fig 5. Animals of wetlands run the risk of becoming bogged down in the soft, quaking ground that lies at the water's edge, so they frequently develop large, weight-spreading feet. Among birds the long toes of herons, waders and moorhens are examples of this adaptation. It takes an extreme form in the jacana, which can even walk on floating vegetation. Some waterside birds have partly webbed feet. In the coots and fin-foots the adaptation takes the form of lobes along the toes which, as well as spreading their weight, helps them to swim. Both the swamp deer of India and the sitatunga, an African antelope, have long, loosely jointed toes.

Wetlands are the most difficult of all the major environments to define and describe concisely. They may be regions of meandering rivers in the Arctic or of ephemeral lakes in the tropics. They may be acid upland bogs, with a flora and fauna quite different from that of alkaline lowland fens only a few miles away, or they may be areas of slow-flowing water such as the Sudd or the "River of Grass" of the Everglades in the US. The one factor that all of these habitats share is water – usually poorly oxygenated – to which their inhabitants are adapted in an astonishing richness of life. The term "wetlands" has been coined to cover all of these varied habitats; as normally used it excludes lakes and rivers and saltwater estuaries.

Few woody plants can stand continuously waterlogged conditions; thus the luxuriant plant growth often found in wetlands is usually made up of herbaceous plants. Some wetland plants are adapted to slight waterlogging, others to life afloat in stagnant water and many to intermediate conditions.

The extreme acidity of many wetland areas means the nutrients, trapped in the peat at the bottom of the water, are not available to the plants. Some have overcome this by developing a carnivorous way of life. Using modified leaves, pitcher plants, Venus flytraps, sundews and butterworts, for example, trap insects or other small animals which they consume by use of enzymes. The minerals from the tissues of these animals compensate for the deficiency of minerals in the environment.

The animal life of wetlands is usually very rich; these regions are often regarded by man as areas of little use so that animals, hounded elsewhere, find in them a secure haven. Some large mammals are specialised for a wetland life, with adaptations of the feet, in particular. These often spread to take the creature's weight on sinking ground. Even reindeer, which spend much of their time in swampy tundra areas, have toes that spread to take their body weight at each step.

Other mammals and birds may have swamp-adapted feet (Fig 1), but it is in some of the lower animals that the most complete adaptations to a wetland life take place. Crocodiles and many other reptiles are well adapted to life in tropical swamps where, because they are air-breathers, the deoxygenation of the water does not bother them. Many tropical amphibians have adaptations involving parental care of the young, a reflection of the ephemeral quality of many of the ponds and waterways that are their homelands.

Fish of swampy areas are usually deep-bodied animals, better able to weave between thick-growing vegetation than the streamlined fish of fast-flowing or open waters. Most can survive reduced oxygen levels and in the tropics where, even before total evaporation takes place, the warm water can hold very little oxygen, many have the ability to breathe dry air. This they do in a variety of ways – in some the fill chambers have become richly supplied with blood capillaries and act as lungs; in others, such as some of the loaches, part of the gut takes over the task of absorbing oxygen and in the mailed catfish even the stomach has become specialised to serve as a lung.

The true lungfish (Fig 2) are all to be found in the tropics of the southern continents, living in streams or pools that are liable to deoxygenation or even completely drying out. It is from relatives of ancestors of the lungfish, which may have been very similar to modern genera, that the first land-dwelling animals, the early amphibians, are thought to have evolved, for they were able to survive the desiccation of their swampland habitats.

Among the invertebrates most freshwater snails breathe by means of lungs rather than gills and so they are well placed to survive should their ponds dry up. Most of these creatures can stand adverse conditions – even the freezing of their swampy homes in wintertime – by growing a mucus shield over the mouth of the shell and entering a state of dormancy until more favorable conditions allow them to return to full activity.

All of the insects that inhabit swamps are also air-breathers, as are the larvae of midges and mosquitoes. These have snorkel-like tubes at the hind ends of their bodies. Which they can push up to the surface of the water. A number of other larvae, such as those of dragonflies and water beetles, have gills, but in both these cases the adults breathe dry air because they leave the water for at least part of their lives, often in order to find a mate and thus complete the life cycle.


Man and the wetlands

Because wetlands cannot be farmed easily man has tended to ignore them until relatively recently. But today, with the need for more land, many swamp and marsh areas have been drained. This has often reduced the numbers of disease-carrying organisms, such as mosquitoes, adding a further impetus to the drainage programs. Nevertheless, wetlands have an importance beyond their own boundaries because they often act as a reservoir of water for distant areas and are frequently the seasonal home of many species of migratory birds. Naturalists and conservationists have realized this for many years and some of the earliest conservation attempts, such as those in North America, have been on behalf of wetlands.