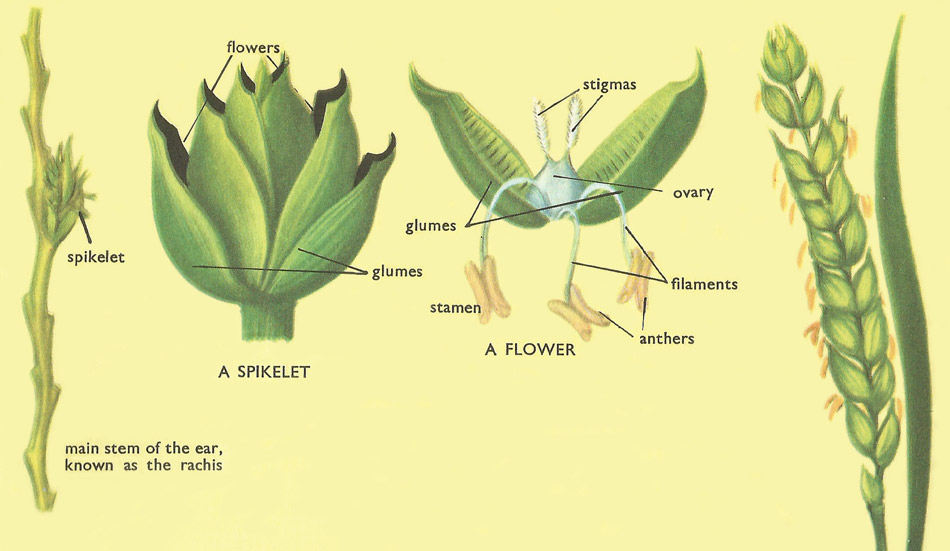 In some varieties of wheat the glumes bear at their tip a long bristle called an awn. Wheat in which the ears have awns is described as 'bearded'; when there are no awns, as in this illustration, it is called 'bald'. To the right is shown an ear in flower. 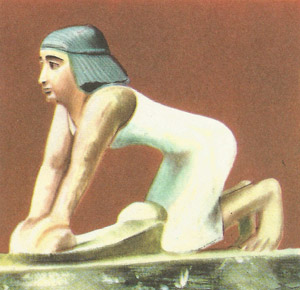 Woman kneading dough. Drawing based on an Egyptian sculpture. 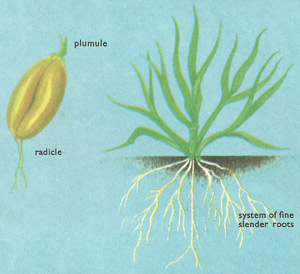 The main stem may develop two or more buds which will produce shoots, each of which will bear an ear of wheat. Thus from a single grain a tuft of leaves and stems is formed. 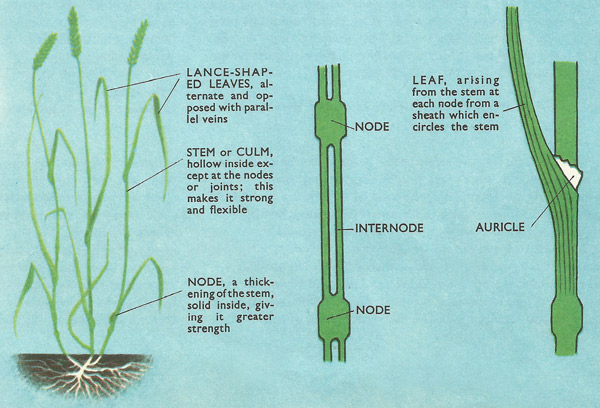 By the time it has completed its growth the plant is 3 to 4½ feet tall. The stem consists of a series of nodes (joints) and internodes, and from each node springs a leaf.

Wheat is the plant from which we make bread; it has been a staple food of the human race from very early times. It is thought that cultivation of wheat began during the Neolithic or New Stone Age, perhaps 6,000 to 7,000 yr ago. In late Neolithic lake dwellings near Zurich in Switzerland charred grains of wheat have been found.

Wheat seems to have had its origin in several kinds of wild grasses, found in the region from Asia Minor to Afghanistan; these hybridize freely with each other.

The wheat grown by people of the early civilizations was probably not very different from the wild varieties, but modern wheat is so distinct from any wild plant that much research has been needed to determine its origin.

By the selection of varieties and the crossing of species nearly 500 different kinds of wheat have been produced, each with its own particular qualities. Some are suited to the plains, others to mountain regions; some thrive in hot climates, others in cold. In recent years varieties have been developed which will thrive even in Alaska or Siberia, within the Arctic Circle.

Wheat is a cereal (from Ceres, the goddess of crops and agriculture of the ancient Romans). Cereals are cultivated plants of the grass family (Gramineae) which have edible seeds formed largely of starch; other important cereals are barley, rye, oats, rice and maize.

From the point of view of their growth, wheats are divided into winter and spring varieties. Winter wheat is sown in the autumn, usually in October or November. On ground unsuitable for winter wheat (or if the autumn and winter weather is very wet), spring wheat is grown in February.

Wheat is sown an inch to three inches deep according to the type of soil. With warmth and moisture the grain swells until its skin cracks, and from its lower end emerges a tiny root called a radical, which will develop into the plant's root system. From the top of the grain grows the young shoot, known as the plumule, which will become that part of the plant that grows above the ground. At first the plant takes all its nourishment from the food stored in the grain, but later the roots absorb water and dissolved minerals from the soil and the leaves take carbon dioxide from the atmosphere and make sugar under the influence of sunlight.

The flowers are clustered at the top of the stem in an inflorescence called the ear.

On this they are grouped in spikelets, each of which has two to six flowers, which are small and green in color and quite inconspicuous. The spikelets are enclosed by bracts, known as glumes, which form the chaff when the wheat is threshed.

The flower consists of three stamens (which bear the pollen) and an ovary, with a branched style, which develops into the seed. The pollen is carried by the wind, but most wheat plants are self-pollinated – that is, fertilized by their own pollen.

In some varieties of wheat the glumes bear their tip a long bristle called an awn. Wheat in which the ears have awns is described as 'bearded'; when there are no awns, as in this illustration, it is called 'bald'.

There is a large number of species of cultivated wheat, all belonging to the genus Triticum; they fall into three groups:

The Einkorn group, primitive types of wheat; now rarely cultivated except as food for stock. A wild species is known in Asia Minor.

The Emmer group, of which one species is important, the so-called Durum wheat; a wild Emmer grows in Syria.

The Common Wheat group, probably an artificial product of hybridization and selection, as no wild species are known. Bread wheat (Triticum vulgare) is the most important species and many varieties of it have been produced.

From the point of view of use after it is harvested, wheats are divided into hard wheats, used for making bread, and soft wheats, used for cakes, biscuits and domestic flour. Durum wheat, mentioned above is made into spaghetti and macaroni.