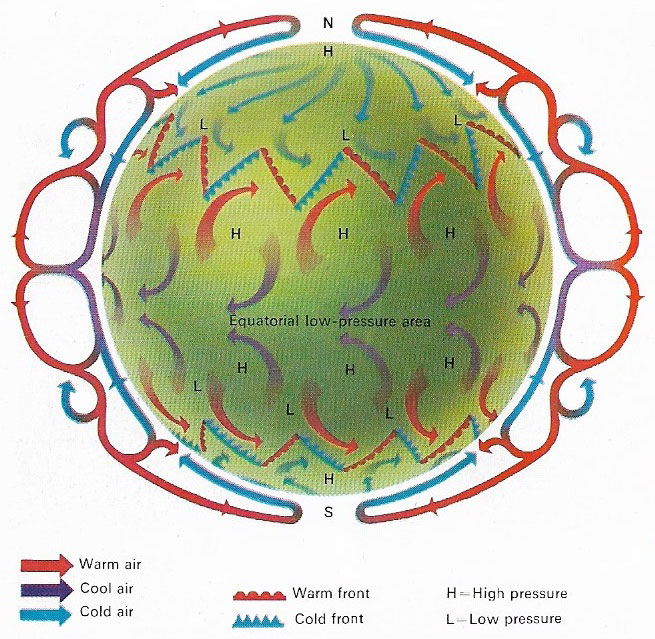 Fig 1. Earth's atmosphere acts as a giant heat engine. The temperature differences between the poles and the equator provide the thermal energy to drive atmospheric circulation, both horizontal and vertical. In general, warm air at the equator rises and moves towards the poles at high levels and cold polar air moves towards the Equator at low levels to replace it. The pattern of prevailing winds is complicated by the rotation of the earth, (which causes the Coriolis effect), by cells of high-pressure and low-pressure systems (depressions) and by the distribution of land and sea. 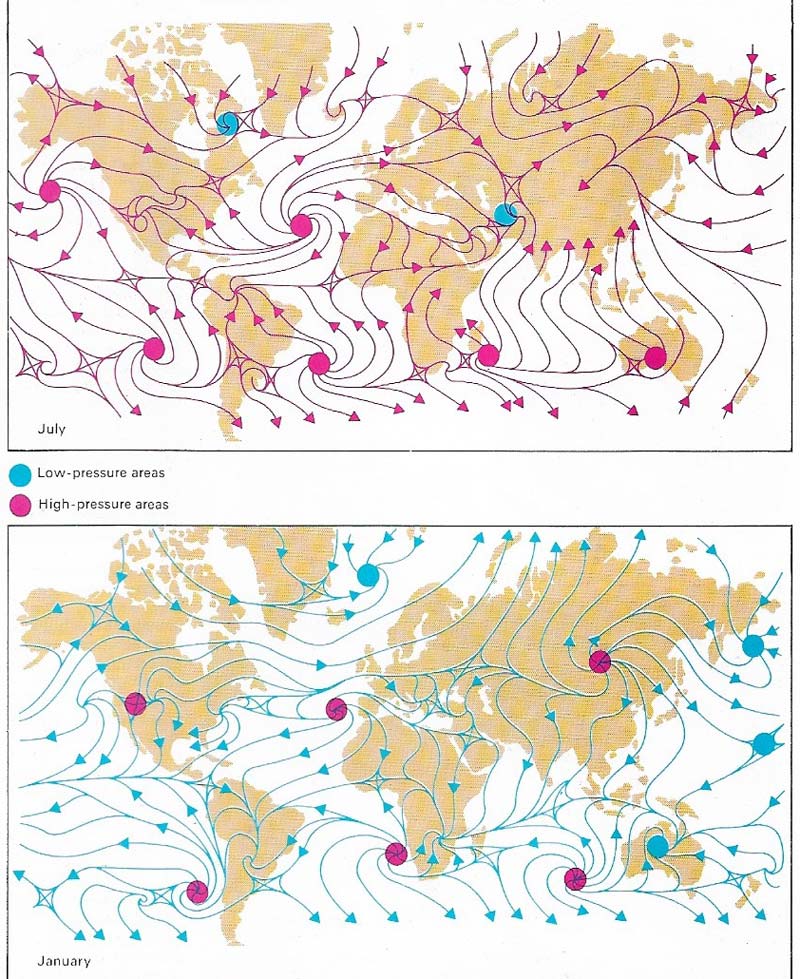 Fig 2. World winds in July and January form a pattern. Patterns at a low level are influenced by cells of low pressure, into which air flows, and high-pressure cells from which air flows outwards. If the earth did not rotate, winds would blow directly from high-pressure cells to low-pressure cells. But the Coriolis effect causes winds to be deflected to the right in the Northern Hemisphere and to the left in the Southern Hemisphere. Wind patterns are remarkably constant between summer and winter west of Africa. But in the east, variations are caused by monsoons (reversals of wind flows). Monsoons arise from the unequal heating of land and sea. For example, dry winds blow outwards in winter across India from the cold high-pressure system over southern Siberia. In summer, the land heats quickly and a low-pressure system develops over northwestern India. Moist, southeasterly trade winds are drawn into this system, bringing heavy rainfall. 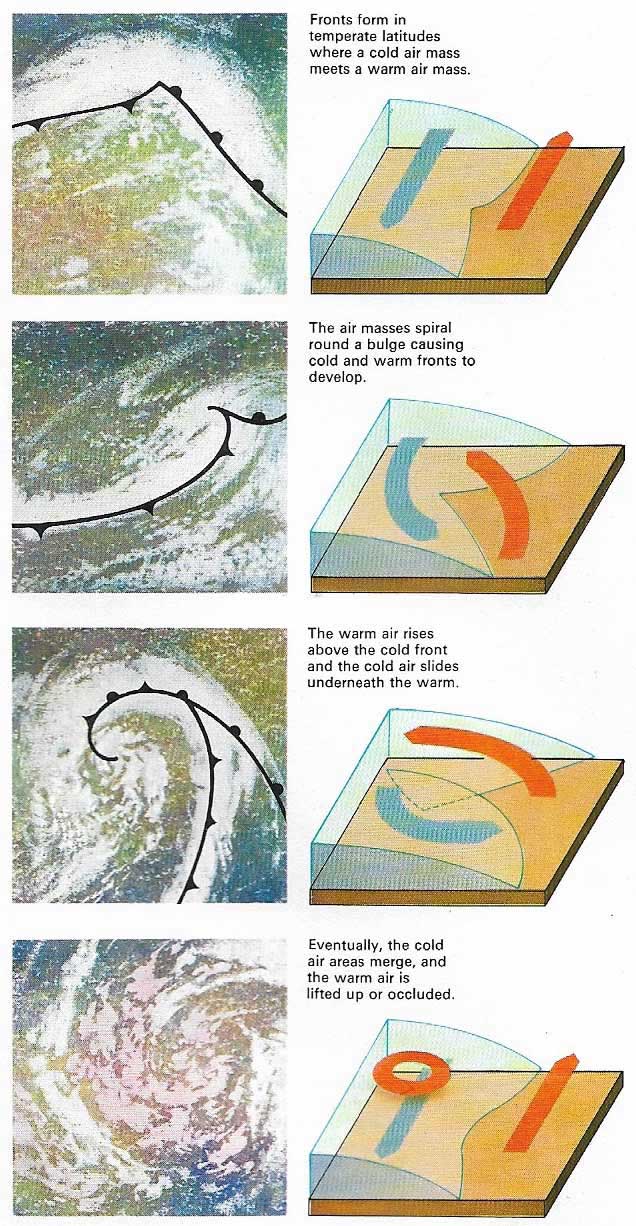 Fig 3. A front is a narrow band of changing weather lying between two air masses of different temperatures and humidity. When the two air masses meet, each pushes against the other to form a cold, warm or occluded front.

Fig 4. Hurricanes consist of a huge swirl of clouds round a calm center – the eye – where warm air is sucked down. Hurricanes may be 400 km (250 miles) in diameter and they extend through the troposphere, which is about 17-20 km (9-12 miles) thick. Clouds, mainly cumulonimbus, are arranged in bands round the eye, the tallest forming the wall of the eye. Cirrus clouds usually cap the hurricane. 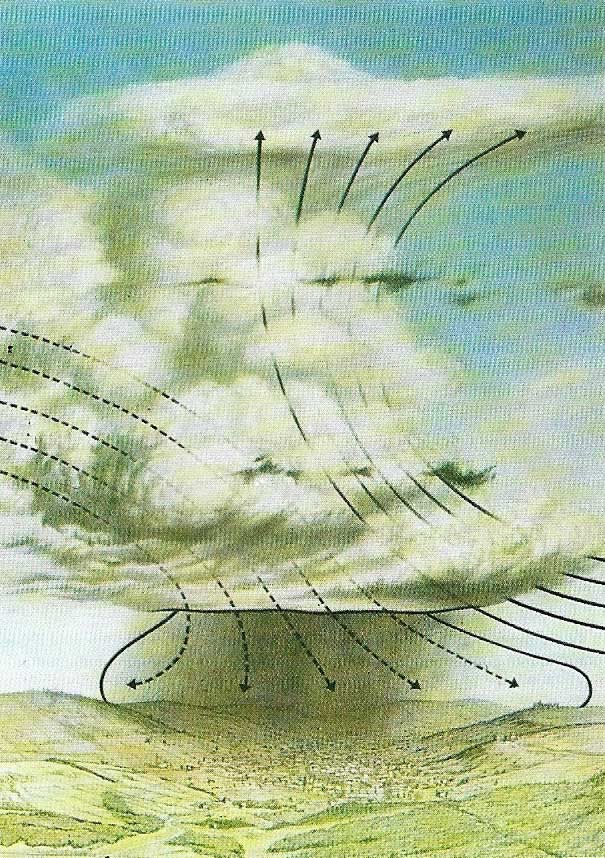 Fig 5. A storm cloud or cumulonimbus has developed along a cold front. These clouds occur when the air mass is unstable over a great vertical distance. Air moves upwards in a convection current and cooling causes condensation. Flat anvil-shaped cloud heads mark the level where stability is re-established. Cumulonimbi are formed along fronts or in over-heated areas. In depressions, a line of cumulonimbus marks the front and thunderstorms and violent squalls occur.

Wind is the movement of air, and large-scale air movements, both horizontal and vertical, are important in shaping weather and climate. The chief forces affecting horizontal air movements are pressure gradients, the Coriolis effect and friction.

Pressure gradients are caused by the unequal heating of the atmosphere by the sun (Fig 1). Warm equatorial air is lighter and, therefore, has a lower pressure than cold, dense, polar air. The strength of air movement from high – to low-pressure areas – known as the pressure gradient – is proportional to the difference in pressure.

The Coriolis effect, caused by the earth's rotation, deflects winds to the right in the Northern Hemisphere and to the left in the Southern. As a result, winds do not flow directly from the point of highest pressure to the lowest. Instead, winds approaching a low-pressure system are deflected round it rather than flowing directly into it. This creates air systems, with high or low pressure, in which winds circulate round the center. Horizontal air movements are important around cyclonic (low-pressure) and anticyclonic (high-pressure) systems. Horizontal and vertical movements combine to create a pattern of prevailing winds.

Along the Equator is a region called the doldrums, where the sun's heat warms the rising air. This air eventually spreads out and flows north and south away from the Equator. It finally sinks at about 30°N and 30°S, creating subtropical high-pressure belts, from which trade winds flow back towards the equator and westerlies towards the mid-latitudes of the south.

Along the polar front in the Northern Hemisphere, the warm air of the westerlies meets the polar easterlies. Waves, or bulges, develop along the polar front, some of which grow quickly in size (Fig 3). Warm air flows into the bulge and cold flows in behind it. The warm, light air rises above the cold air along the warm front. Behind, the cold air forces its way under the warm air along the cold front. Gradually, the cold front catches up the warm front and the warm air is pushed above the cold in an occlusion. In cyclones in the Northern Hemisphere, the air circulates in an anticlockwise direction (clockwise in the Southern). Along the warm front, a broad belt of cloud forms, bringing rain and sometimes thunderstorms. The cold front usually has a much narrower belt of clouds. Clouds and rain normally persist for some time along occluded fronts.

The circulation of air in anticyclones is the reverse of cyclones, being clockwise in the Northern Hemisphere and anticlockwise in the Southern. Many anticyclones are formed in warm, subtropical regions by sinking air. In winter anticyclones form over continental interiors in temperate latitudes as a result of the cooling air.

Monsoons (Fig 2) are seasonal reversals of wind direction. The most celebrated monsoon occurs in India, where the generally northern winds of winter are replaced by generally southerly winds in summer. The summer winds contain a lot of water vapor, which falls in heavy rainstorms.

Another reversal of winds on a local scale occurs with land and sea breezes. Sea breezes spring up on warm days along sea and lake shores when a pressure gradient is established between the rapidly heating land and the less rapidly heating water. As a result, winds blow on to land. At night, the land cools faster than water, so a reverse gradient reverses the wind.

The most common storms are thunderstorms (Fig 5). About 45,000 occur every day, in both temperate and tropical regions and pre-requisites for their formation are strong, rising air currents. As the air rises, it is cooled and latent heat is released as condensation occurs. The release of heat provides energy that intensifies the upsurgence of air and the development of the storm. The condensation causes culls-nimbus clouds to rise sometimes more than 4,570 m (15,000 ft) from their base to their top. These clouds bring with them rain and hail and, sometimes, thunder and lightning.

Hurricanes (Fig 4), also called typhoons or tropical cyclones, form over warm oceans. They have fast spiralling winds, which may reach 240–320 km/h (150–200 mph). The calm center, or eye, contains warm subsiding air. The eye may be between 6.5 and 48 km (4 and 30 miles) across. The hurricane itself may have a diameter of 480 km (300 miles). The warmth of the air in the eye contributes to low air pressure at the surface. Warm, moist air spirals upwards around the eye. Condensation creates cumulonimbus clouds and releases latent heat which further increases the upward spiral of air. Hurricanes are especially destructive along coastlines where storm waves and torrential rain cause destruction through flooding.

Tornadoes are violent whirlwinds, but they cover a far smaller area than hurricanes. A tornado forms when a downward growth starts from a cumulonimbus cloud. When the funnel-shaped extension of the cloud reaches the ground, it may be between 50–500 m (164–1,640 ft) wide. It crosses land at speeds of 32–65 km/h (20–40 mph) and usually dies out after 32 km (20 miles), although a few are known to have travelled as far as 480 km (300 miles).