The effects of local climatic differences can be seen in the trees found along a line transect of a southern portion of the Great Divide and Tasmania. The westward-facing mountain slopes are much drier than those facing east and on them grow the dry, "hard-leaved" or sclerophyll forests of eucalyptus. Only in the moist areas can the species if tree ferns survive. The prevailing winds often warp the growth of beech and snow gum. 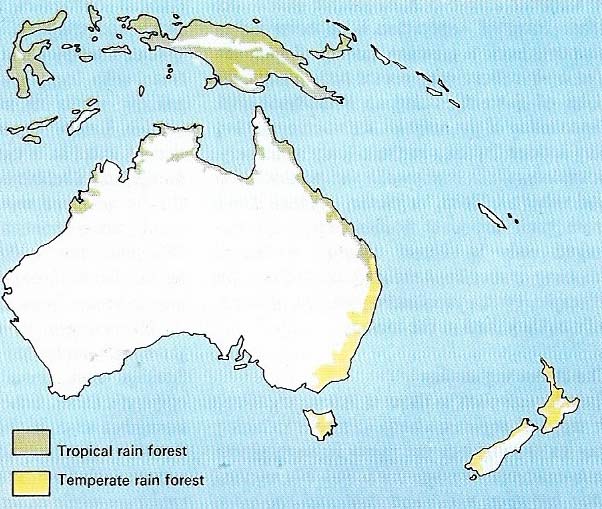 Fig 1. The forests of Australasia are of two distinct types: temperate and tropical, each supporting a unique selection of plants and animals. The temperate forest of southeast Australia is the one which man has had most impact, but even here high rainfall and fertile soil may produce "jungle". 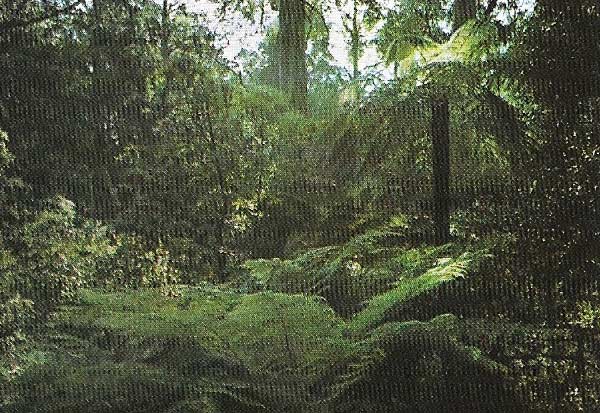 Fig 2. Tree ferns and eucalyptus abound at the edge of a typical "wet" forest area of New South Wales. In the depths of this type of forest the lyrebird builds its domed nest of sticks and moss on a tree stump or edge. 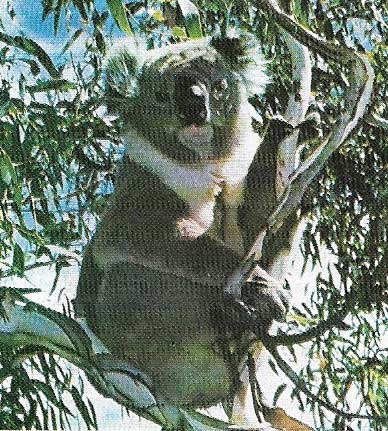 Fig 3. The koala (Phascolarctos cinereus) was once slaughtered for its fur, but the animal is now protected. Confined to the southeaster states of Australia, koalas feed on about 12 species of eucalyptus or gum tree. They rarely come to the ground and spend most of their lives in the tree tops eating leaves and young bark. They are mostly solitary, but an adult male usually has a small harem which he guards jealously. The maximum body length is about 85 cm (33 in). 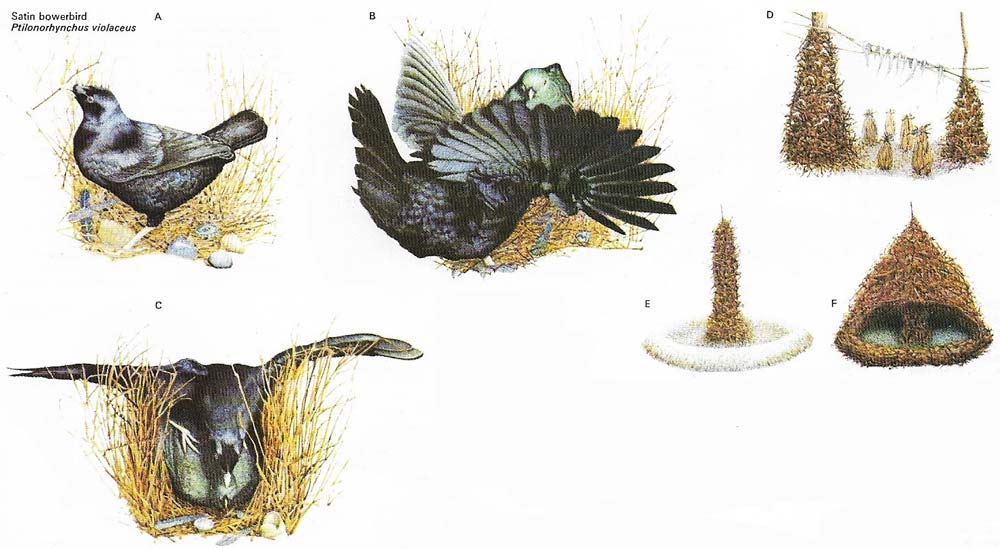 Fig 4. The male satin bowerbird (A) constructs a simple grotto of grass and twigs. He decorates this with brightly colored objects, particularly blue ones. When a female approaches (B), the male lures her into his bower by many display postures, including wing-spreading. If the female is attracted she will sit on the floor of the bower and allow the male to mate with her (C). She then departs to build a nest, lay eggs, and tend the chicks alone. Bowerbirds are grouped together according to bower type. Stage makers display on a flat, open floor; avenue builders, like the satin bowerbird, construct rows of grass and twigs; and the maypole builders make complex structures (D, E, F). 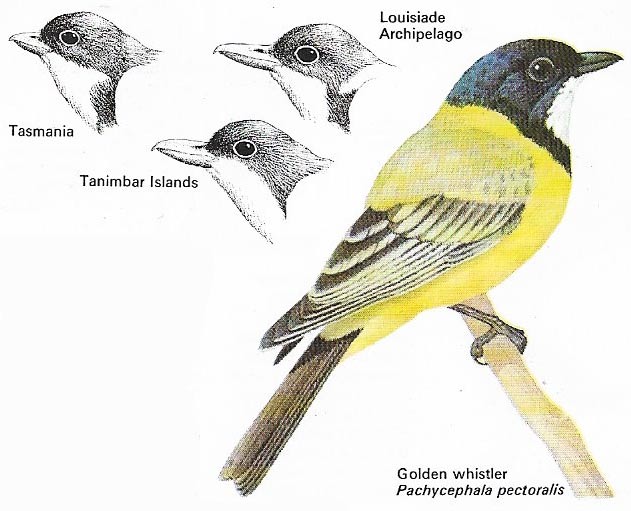 Fig 5. The golden whistler is a bird found in many different forms on the islands round the Australian coast. Bill shape, as shown here, varies considerably between island races, and reflects the way in which each has become adapted to feed in different kinds of forest. 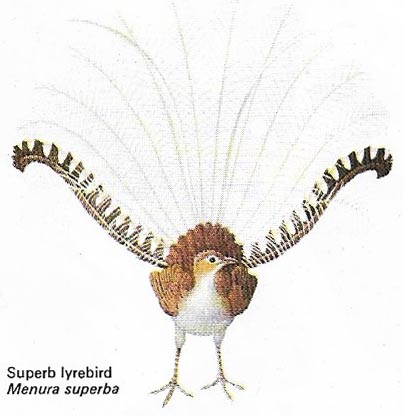 Fig 6. The secretive and shy lyrebird is rarely seen by man because it hides in densely vegetated gullies in the most inaccessible parts of the temperate forest. The female lyrebird is remarkably fastidious, for she carries all the droppings from the nest and puts them in a stream.

Despite its large area, only a small proportion of the Australian land mass is covered with true forest (Fig 1). Temperate forest covers the southern portion of the Great Divide, the mountain ridge separating the eastern coastal plain from the interior, extending to the southeastern corner. In contrast, the forest of the northern coastal areas is typically tropical. Of the large islands that form the remainder of the Australasian region, New Guinea is clothed with tropical rainforest and New Zealand and Tasmania largely with temperate trees, although the last two have suffered extensive clearance by settlers.


The effects of isolation

The animals and plants of the region have close equivalents in other parts of the world but relatively few representatives. This is because of the long period of isolation from other major continents. The less advanced forms of life, including insects, reptiles, and amphibians, are unique to the Australasian forests. Among them are many primitive or "relict" species – the hallmarks of millennia of isolation and of island living – including primitive New Zealand frogs (Leiopelma spp) which live near mountain tops, and two families of egg-laying mammal, the platypus (Ornithorhynchus anatinus) of temperate Australian streams and the spiny anteaters of eastern Australia nd New Guinea.

The trees of the temperate forests comprise many different genera unique to the world's southern continents. They include many species of aromatic gum (Eucalyptus spp) and southern beeches (Nothofagus spp). In the damper areas, giant tree ferns (Dicksonia spp) abound (Fig 2).

Australasia's tropical forests, very similar to those of the Oriental region, include large-leaved tropical trees such as stilt-rooted mangroves (Sonneratia spp) and trees with edible fruits – coconut palms (Cocos spp), bananas (Musa spp) and breadfruit (Artocarpus spp). In the humid forest of New Guinea there are some perculiar "living fossils" found only in the southern Pacific region. They include the winter's barks of the family Winteraceae, the spiky monkey puzzles (Araucaria spp), and members of the primitive podocarp family, Podocarpaceae, of which the "plum yew" (Podocarpus spp) bears succulent "cones".

Like the trees among which they live, many of the mammals of the Australasian forests are unique and almost all (apart from bats and rodents) are marsupials. The canopy, inhabited by primitives in other forests, is here the home of tree kangaroos (Dendrolagus spp) and the many species of arboreal phalangers, among them Leadbeater's possum and the koala (Fig 3). The single koala species is confined to the eucalyptus forests of eastern Australia. There, koalas are fully protected from the depredations of man, who once slaughtered them for their fur.

The predators within the forest are the varied species of native "cat", but no longer are the forests of the southeast roamed by the pouched "wolf" or its attendant "devil". The forest and scrub of Tasmania are now the only homes of the Tasmanian devil (Sarcophilus harrisii), which feeds on a wide variety of animal food, including carrion. When the pouched wolf or thylacine (Thylacinus cynocephalus)was more common, accompanying Tasmanian devils fed on the remains of the wolves' kill. The last specimen of thylacine to be seen was shot in 1930.


Fliers of the forests

New Zealand forests contain only two native species of land mammals, both of them bats, the wattled bat (Chalinolobus tuberculatus) and the New Zealand short-tailed bat (Mystacina tuberculata). Unusually, the chief herbivores are birds. The most spectacular of these, the moas, were hunted to extinction by the original migrants, the predecessors of the Maoris, for food and feathers. Other peculiar birds of New Zealand still living are the three species of flightless kiwis (Apteryx spp) and a rare ground parrot, the kakapo (Strigops habroptilus).

Some of the most strikingly colored and vocal inhabitants of the Australasian forests are the many varieties of birds, a great number of which are found nowhere else in the world. The most magnificent of these are inhabitants of the tropical forests of New Guinea and include the birds of paradise (family Paradisaeidae) the bowerbirds (family Ptilonorhynchidae) (Fig 4), and several unique species of pigeons, among them the slate blue and crested crowned pigeons (Goura spp), the largest of which is almost the size of a turkey – about 1 m (39 in) long.

Parrots abound among the branches of both tropical and temperate trees. One of the most familiar is the sulfur-crested cockatoo (Cacatua galerita), a popular cage bird the world over. Harsh and strident parrots calls resound through the forest canopy while in the densely vegetated undergrowth of the temperate southeast the make lyrebird (Fig 6) indulges in his ventriloquist song, throwing his voice in a remarkable assortment of calls borrowed from others.

From crown to floor, the forests are occupied by nectar-eating honeyeaters, insect-eating thornbills, fantails, and Australian robins. Although some birds, such as the rock warbler of the Hawkesbury Sandstone area of Sydney, have a restricted range, others, such as the golden whistler, are widespread and show many local variations of bill shape or plumage.