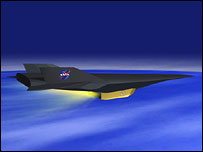 X-43A is a subscale prototype that forms part of NASA's Hyper-X program to develop a commercial hypersonic suborbital aircraft. The X-43A scramjet is designed to fly as speeds between Mach 7 and 10, easily beating the world's previous fastest air-breathing plane, the Mach-3 SR-71 Blackbird. The X 43-A is launched aboard a Pegasus from a modified B 52 bomber. The first flight, on June 4, 2001, ended in failure when the Pegasus launch vehicle veered out of control and had to be destroyed just minutes before its passenger was due to fire its scramjet engine. NASA has other X-43As with which it will resume flights when the problem with the Pegasus has been resolved.