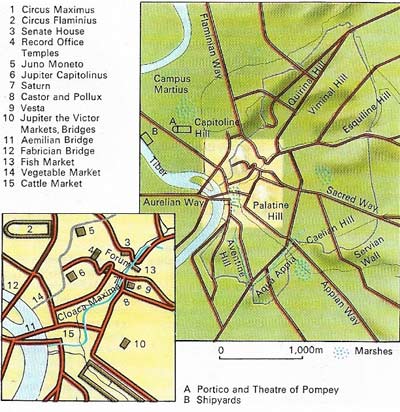 Fig 1. The Seven Hills of Rome are flat-topped spurs rising from a low, formerly marshy, plateau. The Palatine, Quirinal and Esquiline were the first to be settled, the Capitoline and Aventine the last. A unified city began to emerge when villages on the Palatine, Esquiline and Caelian came together in the early 7th century BC. The first wall round the city was built according to tradition in the 6th, which was apparently a period of great building activity under the Etruscan kings. The Cloaca Maxima, a sophisticated drainage system, and the temple of Jupiter Capitolinus both date from this early period. 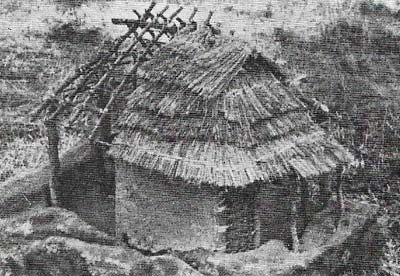 Fig 2. A village of huts on the Palatine, one of which is shown here in reconstruction, was discovered after World War II. It dates from the mid-8th century BC and so seems to support the legend of the foundation of Rome by Romulus and Remus. Crude in construction, these huts were the homes of farmers and shepherds of Latin origin who are the earliest known inhabitants of the city. There is now archeological evidence that Latium, the area surrounding Rome, was colonized in the 12th century BC by Late Bronze Age people who came from the east by sea, thus reinforcing the legend handed down to us by Livy that Rome's environs were settled by refugee Trojans under the leadership of Aeneas. 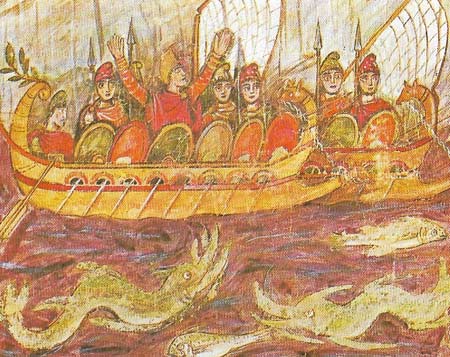 Fig 3. Aeneas, who escaped from Troy after the Trojan War, was said to have founded Rome. This legend was enshrined in the Aeneid by Virgil (70–19 BC). This fourth-century manuscript vividly illustrates the dangers of his voyage to Latium. 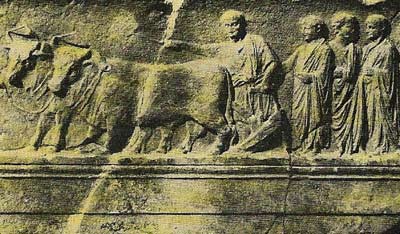 Fig 4. The formation of a new Roman colony was formally recognized when the founder guided a bronze plow, drawn by a bull and a cow, round its boundaries. Colonies were useful as a means of garrisoning vulnerable areas and also for moving surplus population and giving them employment. A few colonies were created as early as the 5th century, but the number increased as Rome's dominions spread because citizen colonies could be founded only in Roman territory. 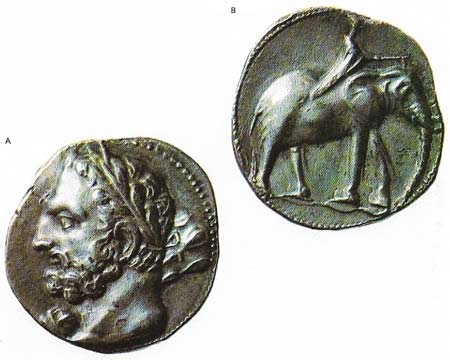 Fig 5. This Spanish coin shows Hannibal (A) on one side and an elephant (B) on the other. The elephants in the force that Hannibal led over the Alps were African forest elephants, which at that time were to be found round the Atlas Mountains, the Moroccan coast, and the oasis of Ghadames in Tunisia. They were much smaller than bush elephants and were better suited to the kind of forced march they had to under take. They terrified primitive tribes. 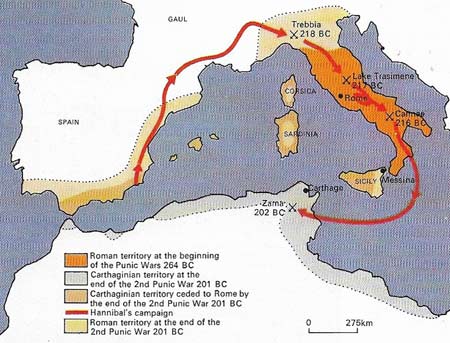 Fig 6. To make an effective challenge to Carthage's domination of the western Mediterranean, Rome had to become a naval power. A large fleet was constructed and equipped with boarding devices to allow for hand-to-hand fighting, at which the Romans excelled. As a result, after initial re-verses they inflicted naval defeat on Carthage in the First Punic War. 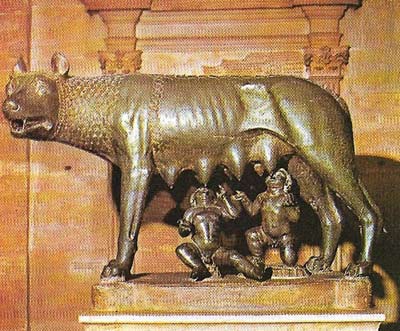 Fig 7. According to legend a she-wolf suckled Romulus and Remus, the mythical founders of the city of Rome. This famous bronze in the Capitoline Museum is of the late 6th century, the period of Etruscan kingship. The figures of the twins were added later, during the Renaissance.

The origins of the city that founded the mighty Roman Empire are obscure. The traditional account, recorded by Livy, is that Romulus and Remus (Key) founded a city on the Palatine Hill (Fig 2) on 21 April 753 BC. At least the date agrees with the archaeological evidence, which shows that shepherds settled on the Palatine about the middle of the eighth century. They joined with other communities in the area in the early sixth century to establish a city around a site that later became the Roman Forum but which had for a period been used as a cemetery (Fig 1).

Of the six kings said to have followed Romulus the first three were almost certainly legendary, but the fourth, Tarquinius Priscus, was Etruscan. His reign marks the beginning of a period of Etruscan control.


Expansion under the republic

Etruscan rule and the monarchy ended simultaneously with the expulsion of King Tarquinius Superbus, traditionally in 509 BC. Two elected consuls and a senate, com-posed entirely of wealthy aristocrats known as patricians, controlled Rome's affairs. During the next 200 years the policy in Italy was directed towards expansion, conquest and consolidation.

Soon after the foundation of the republic Rome played a leading part in the formation of the Latin League, an alliance of the cities of Latium, the western region of central Italy. In 390 BC the Celtic Senones and other Gallic peoples overran northern Italy and captured all Rome except the Capitol. They left on payment of a ransom and Rome profited from the bitter lesson by building the Servian Wall, which made it the most strongly defended city in Italy.

From this secure springboard Rome engaged confidently in a number of wars, which resulted in its obtaining undisputed mastery over the whole of Italy from the Po valley southwards. In 340 BC the cities of the Latin League rose against Rome but found themselves no match for their powerful partner. Rome imposed separate terms on each vanquished city, awarding some Roman citizenship, some part citizenship and punishing others, but in each case stipulating that the city should trade only with Rome. The next struggle, against the Samnites in the south, was much harder. A Roman army was forced to surrender at the Battle of the Caudine Forks, but by 290 BC the war was won. Victory over the Greek cities then gave Rome control over the whole peninsula, a position it consolidated through alliances and the establishment of citizen colonies (Fig 4) but above all by the threat of its army.

By this time the plebeians had seen many of their grievances rectified. They had their own council, the concilium plebis, and their own officers, the tribunes. In 445 BC they received the right to marry into the partrician class and in 366 BC the first plebeian consul was elected. From 287 BC measures passed by the concilium plebis had the force of law. For the moment social conflict was muted although these changes had done little to alleviate the poverty of most of the plebeians.

Rome's advance into the south of Italy had brought it face to face with the Carthaginians (Poeni), who were ensconced in western Sicily and appeared to have designs on the eastern part. In the First Punic War (264–241 BC) Rome, after several near disasters, built their first fleet and eventually mastered Sicily. (Fig 6). The ostensible cause of the Second Punic War (218–201 BC) was an attack by the Carthaginian general Hannibal on Saguntum, a city on the eastern coast of Spain allied to Rome. Hannibal with 40,000 men and a train of elephants made a remarkable march through Gaul and over the Alps (Fig 5). He inflicted severe defeats on Roman armies at Trebbia, Lake Trasimene and Cannae, but they the delaying tactics of Fabius and the loyalty to Rome of most of its Italian allies began to have their effect. A crucial blow was the defeat at the Metaurus River in 207 BC of Hannibal's brother Hasdrubal, who was bringing reinforcements from Spain.

Rome opened up a second front, the young and brilliant Scipio (later given the title of Africanus Major) capturing Carthago Nova and then driving the Carthaginians out of Spain completely. In 204 BC Scipio led an invasion force from Sicily into Africa. Hannibal was forced to retire from Italy but the war ended with his defeat at Zama. The Third Punic War (149–146 BC) began when Carthage attacked Rome's ally Massinissa, king of Numidia (modern Algeria). After a desperate siege Carthage was captured in 146 BC and razed to the ground.


Influence of the Gracchi

During the second century BC Rome con-trolled almost the whole of the Mediterranean area, but storm clouds gathered at home. The patricians and rich plebeians kept a stranglehold on government and, perhaps of more immediate concern, on land. A champion of the poor arose in the person of Tiberius Gracchus, a tribune of the plebeians, who in 133 BC introduced a and bill intended to reduce drastically the large estates held by a few rich men. Rioters incited by apprehensive senators murdered Tiberius, but ten years later his brother Gains tried to reduce the price of corn and generally to break the power of the senate. But proposals to extend the citizenship to all Rome's Latin allies were too radical and brought about his political ruin and death.