Fig 1. The Temple of the Obelisks at Byblos (the most powerful Phoenician city in the Egyptian period) dates from the middle Bronze Age. These open-air sanctuaries were dotted with stelae or pillars erected in honor of the gods or to mark cremations or the burial places of important objects. 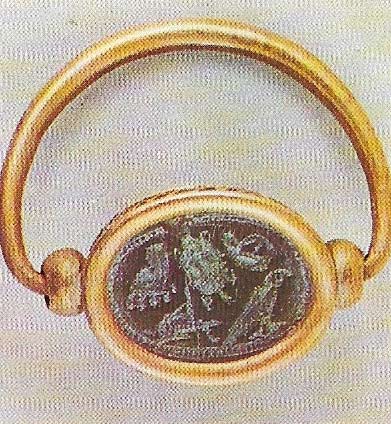 Fig 2. The Phoenicians were skilled at working gold, an art they learnt from the Mycenaeans and Egyptians. This gold ring dates from the sixth or fifth century BC and was found at Tharros in Sardinia. The scarab on the ring depicts Bes the Egyptian dwarf god. 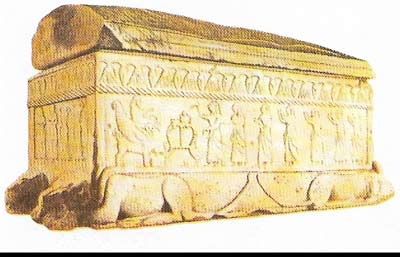 Fig 3. This limestone coffin dates from the thirteenth century BC, but was reused by King Hiram of Byblos in the early tenth century. The king is shown seated on a throne and flanked by winged sphinxes; the drooping lotus in his hand indicates that he has died. Before him is a food-laden table, and a procession of servants is approaching him. Above this scene is a typically Egyptian lotus frieze. Below are four lions which are more reminiscent of Assyrian or Hittite reliefs. On the lid is one of the earliest examples of Phoenician script. 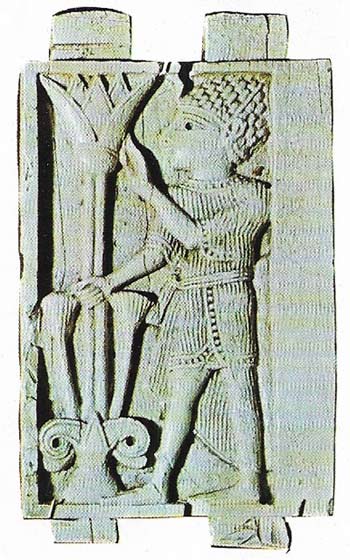 Fig 4. The tree of Life, fertility symbol of the Babylonians and Assyrians, and the lotus of Egypt are combined on this Phoenician ivory plaque from an Assyrian palace. It shows both the extent of Phoenician trade, and the resultant diverse influences on their culture. 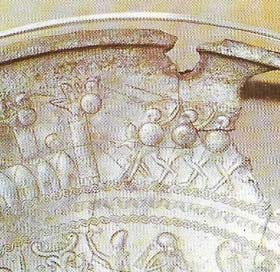 Fig 5. Egyptian influence is a feature of almost all the decorated metal bowls found on Phoenician sites. Many, like this bowl (seventh century BC) from Amathus in Cyprus, also have Assyrian characteristics. The outer frieze depicts a Phoenician city besieged by Assyrians and Greeks (as in the detail here). The inner frieze includes Egyptian deities and also Phoenicians with Egyptian amulets. 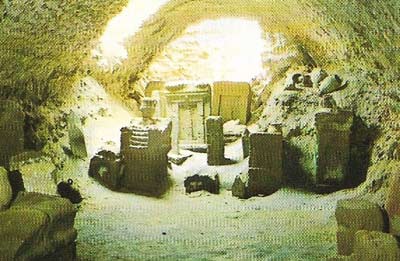 Fig 6. The precinct of Tanit at Salammbo was used throughout Carthage's history. Tanit was another name for Anat or Astarte, the chief female deity of the Phoenicians. Many stelae with symbols of Tanit and dedicatory inscriptions have been discovered in the precinct, but the most sensational finds were thousands of urns containing the ashes of cremated babies – clear evidence of infant sacrifice in Carthage. 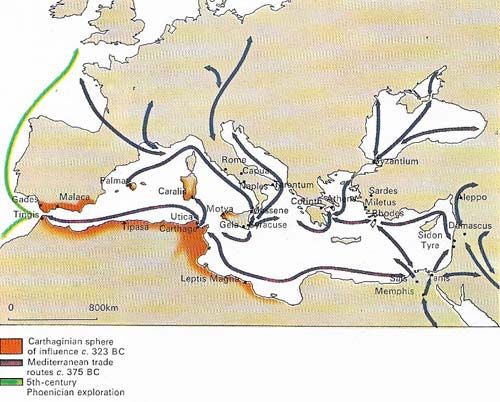 Fig 7. Carthage extended Phoenician influence in Spain, Sardinia, and North Africa. The Phoenicians had several footholds in western Sicily, and in 480 BC the Carthaginians made an abortive invasion of the north to aid Xerxes. At the end of the fourth century they waged an unsuccessful war against Syracuse. 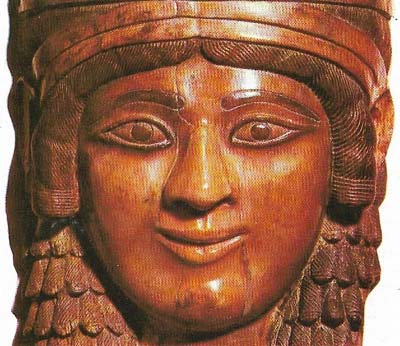 Fig 8. This Phoenician ivory carving may be Ishtar, the Mesopotamian fertility goddess. Her Phoenician equivalent Anat (Astarte) was a chief helper of Baal, the Canaanite god.

The ancient land of Phoenicia covered the coastal strip of modern Israel, Lebanon, and Egypt. Its prosperity depended on the waters of the Mediterranean. Phoenician trading ships sailed remarkable distances, opening up new markets and protecting existing routes by establishing trading stations and colonies. The history of Phoenicia is the history of its great cities and colonies, particularly Byblos, Tyre, Sidon, Beirut, and Ugarit.

Phoenician cities, like the city states of Classical Greece, maintained their independence from each other. However, independence from their more powerful neighbors was less easy to sustain. In the early sixteenth century BC, Egypt exacted tribute from the cities and then brought them totally under its control. Egyptian influence (Fig 5) remained strong in Phoenicia, but the cultural and physical presence of Mesopotamia became increasingly dominant, as the early Phoenician cuneiform script and the evidence of many artefacts makes clear. After a period of Hittite control the Assyrian king Tiglath-Pileser I (reigned c. 1115–c. 1077 BC) received tribute from the Phoenician cities. Phoenicia then regained its independence of action. A period of great prosperity followed and with it came a remarkable expansion of power throughout and even beyond the Mediterranean.

However, as Assyria's power approached its peak, the Phoenicians again became a tributary people, in thrall first to Ashur-nasirpal 11 and his son Shalmaneser III in the ninth century, and then to Tiglath-Pileser III in the eighth century. In the following century the armies of Esarhaddon overran most of Phoenicia. Tyre held out but eventually fell to the Babylonians in the reign of Nebuchadrezzar II (604–562 BC). Later Phoenicia became part of the Persian Empire of Cyrus the Great. It remained an important sea power, but the powerful contingent that it contributed to the fleet that Xerxes (c. 519–465 BC) led against Greece shared heavily in the defeat at the Battle of Salamis in 480 BC. Alexander the Great (356–323 BC) incorporated Phoenicia into his empire after his victory at the battle of Issus in 333 BC and his capture of Tyre in 332 BC.

From the earliest days of commerce with Egypt and Mesopotamia, the Phoenician economy relied on trade, importing gold, ivory, livestock and corn, and exporting timber, metals, cloth, glass, and ships. Its trading vessels often carried the goods of other peoples, taking the produce of the Asian hinterland to Egypt, Greece, and Cyprus and later to North Africa, Spain and the Mediterranean islands. Flourishing Phoenician industries included dyeing, which was centered on Sidon and Tyre, metal-working (Fig 2), glass-making, pottery and carvings in ivory and bone.


Phoenicia as a colonial power

Phoenicia's colonizing era began in the twelfth century. It had already planted settlements in Cyprus but it is likely that contacts about this time with the Mycenaeans sparked the imagination and the commercial acumen of Phoenician merchants. In the Aegean, Rhodes and probably Crete had Phoenician settlements, but there is only literary evidence of a Phoenician presence on the Greek mainland. No more concrete evidence of Phoenician colonization in Italy exists, though there were close trading ties. But in the central and western Mediterranean, the Phoenicians established a chain of colonies, which made them dominant in the area.

Phoenicia also founded several colonies on the North African coast [9] at an early period, including Utica, Hadrumetum (modern Sousse) and Leptis Magna. But the most distinguished of all the settlements, eventually surpassing its mother city, Tyre, in power, was Carthage (Fig 6), which dominated – although it did not rule – the Phoenician colonies in the west. The most important of these were Gades (modern Cadiz), Ebesus (Ibiza), which Carthage founded in the middle of the seventh century BC, and Carthago Nova (Cartagena), founded by Hannibal's son-in-law Hasdrubal in 228 between the first and second of the Punic Wars (which ended with the destruction of Carthage by Rome).

A policy of colonization is often accompanied by an impulse towards exploration and the Phoenicians appear to have been enthusiastic explorers. The Greek historian Herodotus reports a story that Phoenician ships circumnavigated Africa, returning in three years to Egypt. Herodotus himself may not have credited this feat, but the details he gives make it possible that the remarkable voyage did take place. According to a much later Roman geographical work, the Carthaginian Himilco sailed from Spain up the Gallic coast to Brittany, and there is a possibility, although no archeological evidence, that he reached Cornwall in an attempt to gain a share of the tin trade.


The legacy of a rich literature

Much light has been shed on the mythology and beliefs of the area in pre-Iron Age times by the discovery and decipherment of the cuneiform texts of Ugarit. Although few inscriptions or documents have survived of the once rich Phoenician literature, these relics are important because the Phoenician alphabet was the basis of the Greek alphabet. The Phoenicians spoke a Semitic language which they wrote in an alphabet of 22 consonants with no vowels.