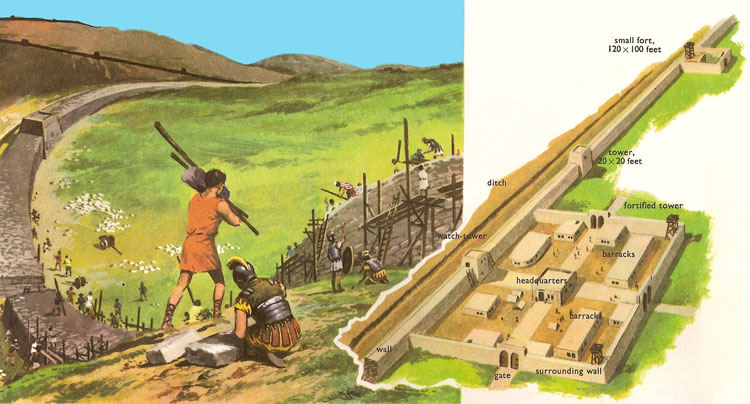 Left: Roman troops building Hadrian's Wall. Right: Reconstruction of a section of the wall with towers and a garrison town. 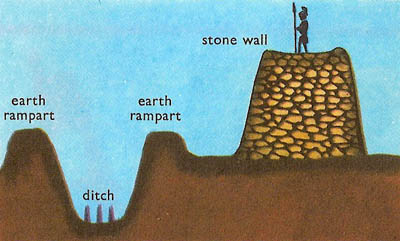 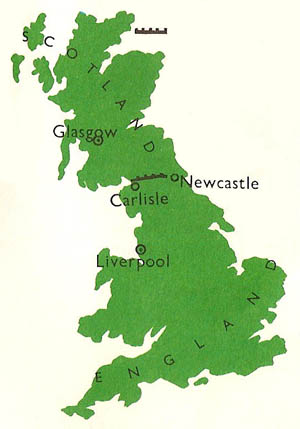 The course of Hadrian's Wall. 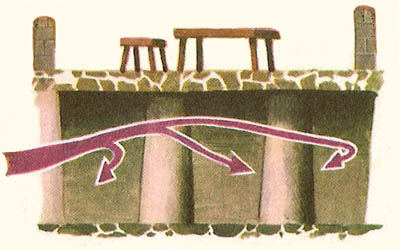 By the beginning of the first century AD the huge Roman Empire had reached its greatest extent, and some of the energy which had been devoted to building it up was beginning to wane. What was more, hordes of invaders were threatening the frontiers, particularly in Germany. And so it was decided that the policy of the Roman Empire and must henceforth be not to try to increase its size but to make sure that its frontiers could be firmly held against this threat. So a series of forts were built along the Rhine to keep out the invaders.

In the small and insignificant province of Britain the problem was much the same. Julius Caesar had made two expeditions to the island in 55 and 54 BC, but it was not until 43 AD that the island was conquered by the emperor Claudius. Although the south of England was quickly subdued, the wild Picts in the north proved less easy to conquer. It soon became clear that it would be better to seal them off from the rest of the island. Hadrian's Wall was the result of this decision.

In AD 78 the emperor Vespasian appointed the famous general Agricola as governor of the unruly province of Britain. After seven years of vigorous campaigning, Agricola had succeeded in subduing the south of the island, and had advanced far into Scotland. But he never conquered the ferocious and uncivilized tribes of Picts and Scots who then inhabited that part of the country.

Agricola built a temporary frontier, guarded by a line of posts, along a line between the present Solway Firth and the mouth of the Tyne. About 30 years after Agricola's departure, however, the southern tribes became dangerously restive, and in one of their risings the 9th legion at York, consisting of from 3,000 to 6,000 Roman soldiers, was massacred. After this, in 122 the emperor Hadrian came to Britain with another legion to replace the 9th and gave orders that the defense of the island should be reorganized and the south separated from the north by a wall running from coast to coast. He entrusted the building of this wall to the governor Aulus Platorius Nepos.


The building of the wall

Platorius Nepos entrusted the building of the wall to three legions: the 2nd legion, called Augusta after the founder of the empire; the 20th, the Valeria Victrix (Victorious); and the 6th, Pia Fidelis (Loyal). The Wall ran for 73½ miles, the eastern 45 miles being of stone, while the remainder was of turf, later replaced by stone. Each of the centuries (consisting of 100 men) into which the legion was divided was given a stretch of the wall to build, and each carved its name on a stone in the wall as a memorial of its services. The centuries made their own arrangements for quarrying and transporting the stone from nearby quarries.

So in this wild and deserted country, almost 2,000 miles from Rome, the silence of centuries was broken by the noise of a gigantic task. The stone masons went off to the quarries at dawn; the guard was on watch throughout the day for surprise attacks; and the builders toiled at the wall – giving evidence even at this distance of the power of Rome.


From the Irish Channel to the North Sea

Thus between 122 and 128 the stone wall rose steadily. It was begun at Newcastle, which the Romans called Pons Aelius, and later extended to Wallsend It ran across wild, lonely country, always following the highest contour of the countryside as far as it could. No natural obstacle impeded its course. Finally, after over 70 miles, it reached Bowness-on-Solway, a few miles from the west coast. In order to make the line complete, the wall was later continued past Bowness to the sea, a tract which had previously been left unprotected.

As work progressed, alterations in the plan took place which makes it difficult to see precisely what was intended.

Modern illustrations normally show the wall as a great bastion, fortified at intervals by a tower. But this gives only a faint impression of the whole achievement. The wall in fact consisted of a system of fortifications on a tremendous scale. Even today, more than 1,800 years after it was built, its remains are still deeply impressive. Numbers of churches, castles, country houses, and roads were built during the course of the centuries from material plundered from Hadrian's Wall. The fortifications consisted of:

In the center of the fortress stood the commander's residence with the sacellum, the shrine where the standards were kept, and the offices. This house had painted walls and a bath. Grouped around this house were the barracks for the troops, the officer' quarters, the depots for military supplies, the granaries capable of holding a year's supply, and the baths.

Even in these isolated spots, the Roman passion for baths insisted on the presence of the thermae. Those built near the wall were large and luxurious buildings with changing rooms, pools, rooms of varying temperature and glazed windows. Incredible though it may seem, the baths and the buildings in which the soldiers lived were efficiently centrally heated. This was done by means of the hypocaust, or underground heating system.

The best remaining example of one of these fortresses is at Housesteads (Borcovicus).