Figure 1. Under a leaden sky the French retreat from Moscow; tortured by bitter cold, increasingly harassed by Cossacks, only a fraction of the Grand Army survived. 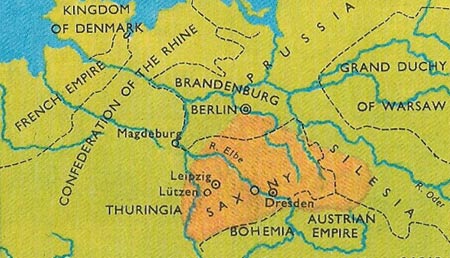 Figure 3. Map showing the route of Napoleon's advance to and retreat from Moscow. 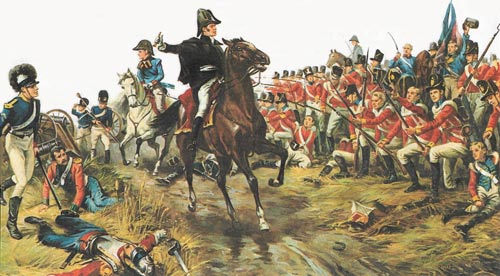 Figure 4. The Duke of Wellington acknowledges the cheers of his victorious troops after Waterloo. The British troops were the only ones who consistently got the better of Napoleon's armies, and they played a decisive part in his downfall.

The awful heat of the Russian summer had given way to something even more terrible. After October the temperature fell rapidly, and soon the snows came. The men of the Grand Army, in full retreat, had never experienced such cold, and every day thousands fell from exhaustion. Guns dropped from frost-bitten from frozen fingers. The remaining horses were eaten and their blood was drunk or sucked as frozen wedges... One of the great crossroads of history had been reached. The army of Napoleon, which people had thought unbeatable, was unquestionably beaten; and it was for its leader his first real set-back and the beginning of the end of his triumphal career (see Figure 1).

In 1811, only a year before his disastrous retreat from Moscow, Napoleon had been at the height of his power. He had subduds Europe but not won its support. Europe's proud ruling families, the Romanovs of Russia, the Habsburgs of Austria, and the Hohenzollerns of Prussia, bitterly resented his triumphs over them. And there was another power who Napoleon had never beaten – Britain, aloof and contemptuous, with an invincible navy, an army in Spain which was carrying all before it against Napoleon's generals, and a treasury ready to finance Napoleon's enemies. In fact there was an increasing determination in Europe to defeat Napoleon, whatever the cost.

The first sign of trouble for Napoleon came from Russia. The Russians had been beaten at both Austerlitz and Friedland, but not decisively enough to endure the hardships imposed by Napoleon's continental blockade. And the Russian Tsar, Alexander I, was coming to believe that he was the 'strong man of the North' foretold by the scriptures, who was to destroy 'Anti-Christ' who he came to regard as Napoleon. Gradually, much to the undisguised fury of the French Emperor, certain Russian ports began admitting British ships under the cover of neutral flags, undermining the continental blockade.

Napoleon was determined to bring the Russians to heel, and so he prepared the Grand Army. And it was a grand army. About half a million were assembled for the campaign. Less than half of them were French; the rest came from Spain, Prussia, Poland, Holland, Italy, and many other places. They had 150,000 horses, together with thousands of guns; wagons containing food and ammunition; and masses of equipment for building bridges to cross the many Russian rivers. Months before the campaign started Napoleon was poring over maps of Russia and studying past battles on Russian soil. Then he began marching his army across Poland and massed it along the river Niemen. No word of conciliation came from the Tsar. On June 23 the colossal army poured into Russia.

Napoleon knew perfectly well that the Russians would not willingly enter into battle. Yet he thought that as city after city fell the Russians would be forced either to make a stand to defend their homesteads or to submit. But he was tragically wrong. Occasionally a group of Cossacks would gaze down at the French army from the hills before turning their horses and cantering off towards the eastern horizon, but the Russian army remained aloof. Moreover, the people burned the land before the advancing army, and compelled the French to forage for food, which became increasingly scarce. When they entered Smolensk they found it scarcely habitable, for the Russians had left it a burning wreck. And although the campaign was as yet young the toll taken by the vast Russian plains and marshes was horrifying. Already, with scarcely a skirmish fought, Napoleon's army was reduced from 500,000 to 160,000.

Yet the cream of Napoleon's army was intact and he had no fear – if only the Russians could be brought to battle. At last his hopes were fulfilled. As they left Smolensk and neared Moscow, with every mile destroying hundreds of men, the Russians decided to make a stand and try to save their sacred city.

The resulting battle was the battle of Borodino. Napoleon would have preferred to have fought with his army in better shape, but this was not a chance to be missed. Napoleon's strategy at Borodino was virtually non-existent. About 120,000 fought on each side, and both sides lost over 30,000. It was essentially a battle of individual commanders making individual decisions, with isolated acts of incredible heroism brightening a black and frightful day. For it was not enough to outmanoeurve the Russians. They had to be annihilated so that they could not withdraw and start the tantalising, elusive chase all over again. So, careless of men, Napoleon placed his faith in massed frontal assaults and in the end he carried the day. The Russians gave way and Napoleon pressed on to Moscow. At last he entered the city. He looked around for some herald or messenger to deliver its keys or acknowledge defeat, or at least seek and armistice. None came. Meanwhile the army, after its awful march, ran wild and rolled about the city in a longed-for orgy of drunkenness.

The Russians had fired their precious city, but the French were in no fit state to put out the fires. Slowly building after building was consumed until one-third of the city was destroyed.

Then followed that terrible retreat from Moscow. As Napoleon's army staggered westward they had to contend with two remorseless enemies: the bitter cold and the Russian armies which were now closing in. Soon a mere 40,000 men were nearing the river Beresina only to find that the bridge had fallen to the Russians. So, frantically, Napoleon's engineers set about building another. They worked up to their necks in freezing water with great blocks of ice driving down and sweeping them away or carrying off their work. On November 26 the bridge was ready and what was left of the army began to move. But the Russian armies had closed in and bombarded the scarcely moving French columns mercilessly. It took the French army three days to cross, but the slaughter inflicted by the Russians was fantastic; no fewer than 24,000 French bodies, rigid from the cold, were washed up on the banks of the Beresina (see Figure 3).

As his ramshackle army limped through Germany Napoleon detached himself from it and hurried to Paris. Once there his boundless confidence and infectious enthusiasm rallied the French to his side. Indeed the years between the retreat from Moscow and the battle of Waterloo were perhaps is most amazing years of all. Rapidly he gathered another army, lowering the recruiting age to 18 and the minimum height to 4 feet 9 inches. But abroad the news was bad. The sight of the remnants of the Grand Army decided the Prussians. They made an alliance with Russia and prepared for battle.

Napoleon was undaunted. His new army was inexperienced but he was still Europe's greatest general. A quick attack in the following spring and the Russians would be punished, the Prussians crippled, and the Austrians frightened into remaining neutra l(see Figure 2). He began his offensive and marched through Germany with his raw recruits. On May 2, 1813 he met the combined Russians and Prussians at Lutzen, and in a battle in which he exposed himself recklessly to all the dangers of his men, the French emerged victorious. But his victory did not have the desired effect, for Austria was now ready to join the battle – against Napoleon. In August she joined the coalition of Russia, Prussia, and Britain (who had signed a treaty of alliance that June). Sweden too sent an army against Napoleon, and in Spain Wellington was reaching the climax of his successful Peninsular Campaign.


Napoleon on the defensive

Now at last the initiative lay with Napoleon's enemies. In August they attacked the French in Saxony and were driven back by Napoleon who brilliantly defeated Blucher of Prussia and Schwarzenberg of Austria at Bautzen and Dresden. The allies decided not to attack Napoleon in person, but to attack his subordinates. One by one, Vandamme, Macdonald, Oudinot, and Ney were defeated. Then at Leipzig the allies came face to face with the Emperor himself. This time their army of 300,000 triumphed over Napoleon's 190,000 in a terrible three-day battle. The Grand Duchy of Warsaw, Saxony, Bavaria, Hesse, Wurttemberg, Westphalia, and Berg, renounced their allegiance to Napoleon; Holland revolted, and in January 1814 Napoleon lost Switzerland. His empire had collapsed like a house of cards.

The next step for the allies was the invasion of France, and in France hostility to the Emperor was understandably growing. Men refused to join his army, and they hid from recruiting officers. As the allies entered France Napoleon showed his old genius. His diminishing army won four battles in four days in the Departments of Aisne and Marne. But he could only postpone the inevitable. In March the British took Bordeaux. On March 30 the allies entered Paris. On April 2 Napoleon heard that the senate had disposed him. He wavered, but the army was behind the Senate. On April 4 he agreed to abdicate in favour of Louis XVIII. On April 11 the Treaty of Fontainebleau was signed. It decreed that Napoleon should renounce the rule of France and Spain and take up the sovereignty of the island of Elba.

Napoleon made one last attempt to recapture his kingdom. He escaped from Elba and in March 1815 landed in France. The army and much of the nation flocked to him; the Bourbons fled. Wellington defeated Napoleon once and for all near the little Belgian village of Waterloo (see Figure 4). After Waterloo Napoleon realised that his cause was hopeless and surrenderedto the British. He was exiled to the remote Atlantic island of St. Helena, where he lived a further five and a half years in a closely guarded confinement – a shadow of a man who had ruled Europe.

In the eighteenth century, European states had been like so many squares of a chessboard into which sovereigns moved their men as they pleased. Napoleon played this game on a more extensive scale than anyone. He reorganised Germany, which had been a patchwork of over 300 tiny marks, principalities, dukedoms, and bishoprics, as well as the larger states of Austria and Prussia, and reduced their numbers to 39. He abolished (in 1806) the meaningless title Holy Roman Empire and set up the Confederation of the Rhine which was completely subordinated to France. But this had unexpected results. For, under more centralised control, the Germans saw French domination for what it was – the rule of one people over another. They also saw that they had more in common with each other than the French – language, race, culture, and territory. So they united in the face of their common foe. And the same thing happened all over Europe. Hatred of the French showed the people of Italy, Belgium, and Spain that they existed as separate units, and had the right to object to a rule they resented, whether of an alien conqueror or even their own despotic governments. So into the 19th century came a spirit of Nationalism, and, closely allied, Liberalism.