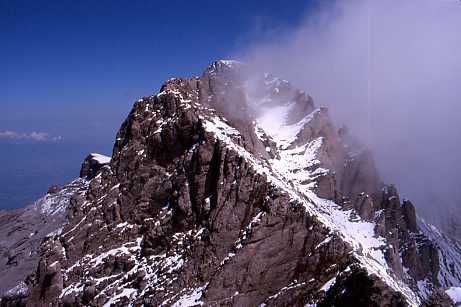 The summit of Mount Olympus in Greece.

Olympus is the ancient name of several mountains or chains of mountains – e.g. in Mysia, Cyprus, Lycia, Elis, Laconia, Arcadia, and one, the most famous of all, between Thessaly and Macedonia. Its eastern side, which fronts the sea, shows a line of vast precipices, cleft by ravines filled with forest trees. Oak, chestnut, beech, and plane trees are scattered along its base, and higher up grow forests of pine, as in the days of the old poets of Greece and Rome. Its highest peak, Mytikas Summit, is 9,570 feet (2,917 meters) above the sea.

Mount Olympus was regarded by the ancient Greeks as the chief abode of the gods, and the palace of Zeus was supposed to stand on its broad summit. According to Greek legend it was formerly connected with Ossa, but was separated from it by an earthquake, allowing a passage for the Peneus through the narrow vale of Tempe to the sea. The philosophers afterwards transferred the abode of the gods to the planetary spheres.