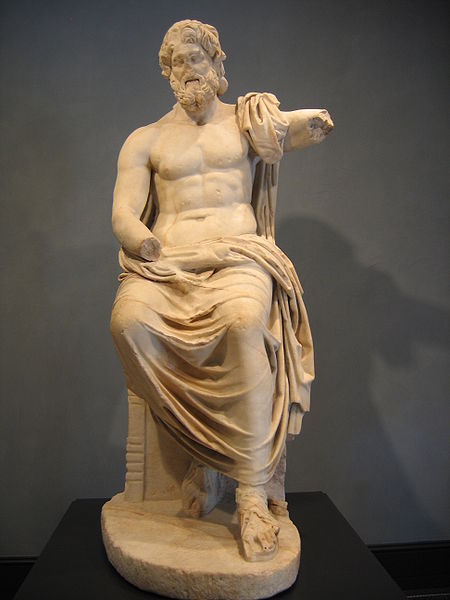 Zeus was the greatest of the national deities of Greece. He was, according to the most received mythology, son of Kronos and Rhea. With the help of his brothers and sisters, Poseidon, Hades, Hestia, Hera, and Demeter, he overthrew Kronos and the Titans, assumed the sovereignty of the universe, and took as his peculiar province the heaven above, giving to Hades the infernal regions, to Poseidon the sea, the earth being left subject to the influence of all three, although to Zeus belonged the supremacy. Next him stood his sister and consort Hera, mother of Ares, Hephaestus, and Hebe. This was his rightful wife, but her position did not preclude a number of inferior marriages with other goddesses, and intrigues with mortal women, such as Europa, Antiope, Callisto, Semele, Danae, Io, Leda, Alcema, etc. He swallowed his wife Metis to bring forth Athena from his own head; Themis bore him the Hours and the Fates; Eurynome, the Graces; Demeter, Persephone; Mnemosyne, the Muses; Maia, Hermes; Leto, Apollo, and Artemis.

Crete, Rhodes, Dodona, and Arcadia were the places where the worship of Zeus was most cultivated, but of all places Mount Olympus in Thessaly and Mount Ida in the Troad were his special haunts. All the local cults of Zeus came gradually to be merged in one great Hellenic divinity – a process carried still further when Zeus was identified with the Jupiter of the Romans and the Ammon of Libya.

Besides the epithets of Zeus from the seats of his worship, he had many titles applied to him from his various powers and functions, moral and physical. He was the father and king of the gods and men; the protector of kings, of law and order; the savior and giver of victory; the avenger of broken oaths and of other offences; he watched over the state, the assembly, the family, over strangers and suppliants; his hand wielded the lightnings and guided the stars; he ordained the changes of the seasons, and, in short, regulated the whole course of nature. All prophecy, too, was supposed to originate in him, and it was from him that Phoebus Apollo received his oracular gift. He dispensed, as it pleased him, both wealth and woe to mortals; but whether he could control the Fates themselves is a point about which the ancients disagreed, as people have done of their supreme deity in all ages where the problems of free will and fate cross each other. Of the many epithets applied to Zeus perhaps the best known is the "Olympian," from that Olympus in Thessaly whose summit was believed to be his residence as well as that of the other gods. His most celebrated festival was the Olympic, held at Olympia, in Ellis, after the end of every fourth year.

These exalted conceptions of the majesty and power of Zeus harmonize indifferently with the stories of his love affairs with mortals and immortals, as well as with the motives of caprice, anger, deceit freely attributed to him. Some mythologists have explained transformations into a bull and the like as originally a poetic and symbolic realization of natural phenomena. But it is questionable whether there is any foundation for these theories beyond that the name (Sanskrit Dyaus) undoubtedly means sky.

The Statue of Zeus at Olympia was one of the Seven Wonders of the World.