A military parade in Rome. The consul (on horseback) is preceded by a guard of honor. Twelve lictors carry the insignia of the consul's power. 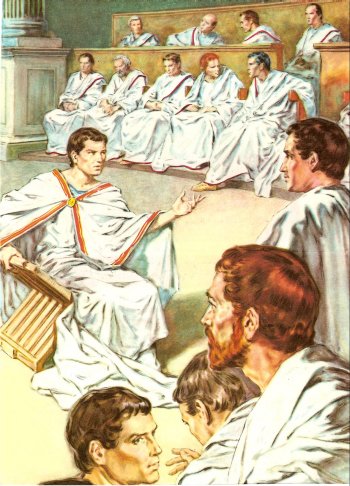 A consul explains a question to be discussed by the senators in the Curia in Rome.

In the year 509 BC Tarquinius Superbus, the last king of Rome, was driven into exile. He had been a terrible tyrant and the Romans swore they would never again have a king. Instead they decided to have a new form of government – a republic.

Here is what was new about the Republic: instead of a single ruler, the Romans appointed two for the period of one year only. The two heads, who were elected each year by an assembly of citizens, were called consuls. If the consuls governed wisely and honestly, they could be re-elected for the following year. The consuls had the same authority as kings: that is to say they were the supreme heads of the State and of the army. As a mark of distinction, they wore togas with a red border and during public spectacles they sat in reserved areas.

The consuls had a guard of honor consisting of 12 lictors who carried on their left shoulder a bundle of birch rods bound together by a strip of red leather. Out of these protruded an axe. This bundle (or fasces as it was called) indicted that the consuls had the power to punish by flogging or even by beheading criminals and traitors.

During the period of the Republic, however, the greatest powers were in the hands of the senators. They could intervene in all the most important affairs of the State; they deliberated on war and peace, they received the ambassadors of foreign countries, they signed peace treaties, they controlled the expenses of the State, and they saw to it that the religious rites were scrupulously observed by the citizens. The senators were therefore the real rulers of the State. The consuls themselves were unable to take any important decisions without first obtaining the approval of the senators.

In the early years of the Republic only the patricians, that is to say the rich, could be elected senators; but later the plebeians, that is to say the poor, also had the right to hold this high office. The senators remained in office for life. Usually they were chosen from elder citizens who had already held office in the State.

It was mainly older men then who sat in the Senate (from the Latin senex, an old man). The Senate held its meetings in a building called the Curia which was situated in the Forum. During the meetings, the doors of the Curia remained open, but the people were unable to enter.

The consuls and other magistrates could call together the senators whenever it was necessary to have their opinion. Here is the procedure that was followed at a meeting of the Senate: in the middle of the Curia, sitting on a curule, was the magistrate who had summoned the Senate; the senators took their places on benches arranged on the right and on the left. After giving an explanation of the question to be discussed, the magistrate invited the senators one by one to give their opinions; the question was then put to the vote. If no magistrate opposed the motion, the decision of the senators was regarded as final.

At the time of the Republic the people had great authority. To express its will, it met in assemblies in the Forum called comitiae, which were presided over by a magistrate. At the comitiae the people elected the consuls and other magistrates and approved or rejected the laws proposed by the consuls. But in order that the decisions of the people might be valid, it was essential that they should be approved by the Senate.