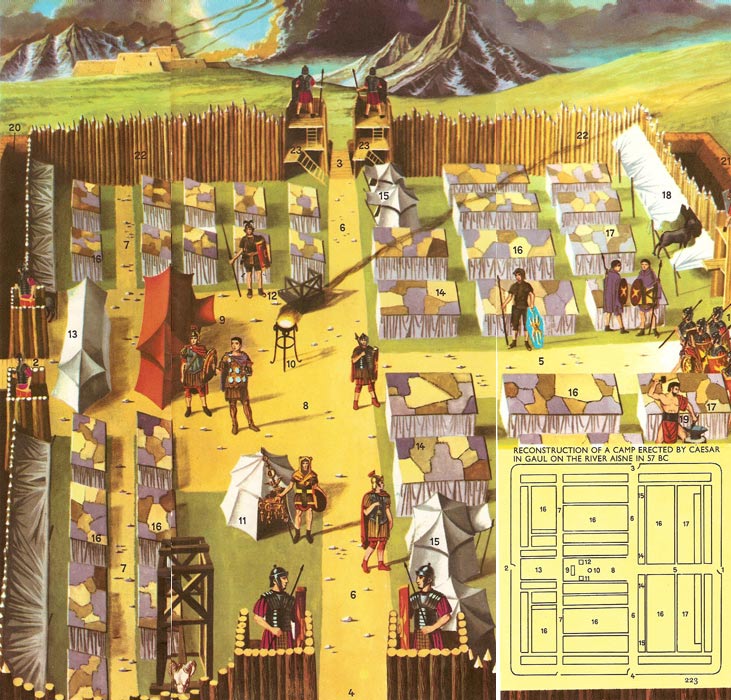 Plan of a typical Roman camp (not to scale). 1. The Praetorian Gate; 2. The porta decumana (so called as it was next to the tents of the tenth cohort of the legion); 3. Left-hand Gate; 4. Right-hand Gate; 5. The Praetorian street; 6. The main street; 7. The via quintana (or "street of the fifth," so called as it lay between the fifth and sixth companies); 8. The forum; 9. The praetorium (square on which stood the general's tent); 10. The spot used for sacrifices; 11. Tent for the standards and ensigns of the legions; 12. The tribunal (or rostrum from which the general addressed his troops); 13. The Quaestor's tent and administrative offices; 14. Tents for the commander's bodyguard; 15. Officers' tents, opening toward the tents of the legionaries; 16. Legionaries' quarters. They were skin tents in the summer, wood or stone barracks in the winter; 17. Quarters of the allies and mercenaries; 18. Stables; 19. Repair workshop; 20. Defensive ditch (about 4 meters wide); 21. Rampart; 22. Palisade. When the camp was moved a short distance, the soldiers carried the stakes from one site to the next; 23. Observation turrets. 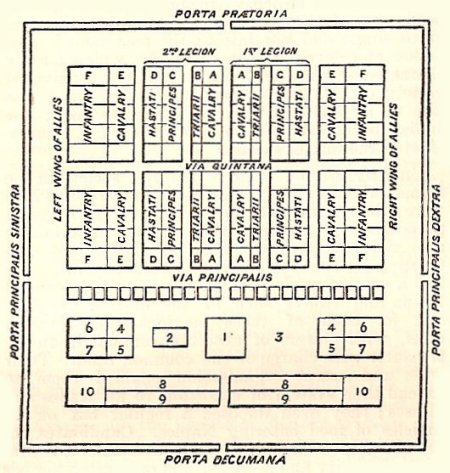 Layout of a Roman camp.

A Roman camp was really a small fortified town, with its own shops and tradesmen, which was often set up for one night when the army was on the march. But Roman soldiers were so well trained that they could set it up in five to six hours.

Livy, the great Roman historian, tells the story of how, one day, the army of the Consul Paulus Emilius was setting up a camp when a young officer burst excitedly upon them. He told the Consul that the enemy were nearby on the march, and in a perfect position to be attacked. If they could be attacked now, victory was certain. Hearing this, the officers made as if to order the suspension of the construction work, but the Consul prevented them. He was surrounded by his officers and implored not to lose such a wonderful opportunity. But Paulus Emilius, his face resolute and serious, mounted the tribunal (rostrum) and spoke to the assembled men.

"Your forefathers," he said, "before thinking of anything else, used to see that their camp was completed. Only then would they leave it to go into battle; if defeated, they had a haven to retire to. They left a strong garrison behind when they went out to fight, for a general whose camp was destroyed was defeated in the eyes of his men even if he was victor on the field.

"Camps are the strength of the victorious, the refuge of the defeated. How many of our armies, facing defeat in the open, have retreated to their camp, and from there, at just the right moment, made an irresistible sally to overthrow the enemy. The camp is your second home. A tent is a soldier's home, a soldier's breath."

So that day the Roman legions gave up the chance of victory and continued their building; digging, forging, and setting up the wooden palisade. Such, to the Romans, was the importance of the camp.

In pitching and striking camp, every man knew his job without having to be told it. Once the tents were in their set places, each company and man began a particular construction job. The whole would then be finished so quickly that it did not seem much of a burden. No army but the Romans could have organized its labor with such efficiency and economy. The training ground for the Roman soldiers was usually the Field of Mars on the left bank of the river Tiber.

Some Roman camps were permanent bases and of considerable size. Like the medieval castles they became much more than mere defensive strongholds. Around many of them, towns grew up, and some towns to this day follow in their street plans the plan of the camp over which they were built.

(Latin castra; the English name camp being from campus, "a plain"). The arrangement of a Roman camp was according to a fixed and regular plan, and an army never halted for a single night without throwing up such an entrenchment capable of containing all of the troops and their baggage. Of course such a camp for the night was much slighter in construction that the castra statica, or stationary camp, which was to shelter an army for some time. The most complete account of the Roman camp is provided by Polybius, the companion in many campaigns of the younger Scipio. The camp, as described by Polybius, was intended to accommodate an ordinary consular army, consisting of two legions, each containing 4,200 foot and 300 horse, together with the usual complement of socii, or allies – in all, 16,800 foot and 1,800 horse. Its general form was square, each side 2,017 Roman feet in length (the Roman foot being 11.65 inches), the whole surrounded by a ditch (fossa), the earth dug out being thrown inwards, so as to form an embankment (agger), on top of which was a palisade (vallum) of wooden stakes which were carried by each soldier.

The upper portion of the camp, separated from the lower by the via principalis, contained about one-third of the space occupied by the lower portion. In its center stood the praetorium (1), or general's tent, in the middle of an open square extending 100 feet on each side of it, its sides each 200 feet long, extending parallel with the sides of the camp. To the left of the praetorium was the quaestorium (2), the quarters of the quaestor; to the right, the forum (3), the public market of the camp. Immediately before the praetorium ranged the tents of the twelve tribuni and the praefecti sciorum, or generals who commanded the allies. In the spaces marked 4, 5, 6, and 7 on either side of the praetorium, were the general's staff, including probably the legati, together with the praetoria cohors, consisting chiefly of men selected from the extraordinarii; the former two being cavalry, the latter two infantry. In 8 were the remainder of the extraordinarii equites, facing towards the via principalis; in 9 the remainder of the extraordinarii pedites, facing towards the agger or rampart. The spaces marked 10 were reserved for occasional auxiliaries.

The tents all faced the viae which formed their boundaries. Before each gate was posted a body of velites, called custodes, to prevent a surprise of the enemy, while pickets of cavalry and infantry called stationes, were thrown forward in advance in each of the four directions to give timely warning of the approach of an enemy. Finally, sentinels (excubiae) kept guard along the ramparts. The night, reckoned from sunset to sunrise, was divided into four equal periods called vigiliae. The watchword (signum) for each night for each night was inscribed on small tablets of wood (tesserae), which were passed along the whole lines, and returned to the tribunes again.

The different parts of the camp were so distinctly marked out and measured off beforehand, that the men on their arrival at once proceeded to their respective stations, as if they had entered a well-known city, and were marching to their accustomed quarters. After the Roman legions came to be divided into cohorts instead of maniples, the plan of the camp necessarily became somewhat altered, but its general plan and main features as to interior arrangement remained the same. In comparing the encampments of the Romans with those of his own countrymen, Polybius tells us that the Greeks trusted mainly to a judicious selection of their ground, and regarded the natural advantages which they thus secured as supplying in a great measure the place of artificial means of defense. The Greeks, consequently, had no regular form of camp, and no fixed places were assigned to the different divisions of the army.

When the practice of drawing up the army according to cohorts, introduced by Marius and Caesar, was adopted, the internal arrangements of the camp experienced a corresponding change. Latterly, even the square form was abandoned, and the camp was made to suit the nature of the ground.It was always held to be important, however, that the camp should occupy a defensible position, that it could not be overlooked, and that it had a command of water.

When stationary camps (castra stativa) came into more general use, they included other parts such as an infirmary (valetudinarium), a farriery (veterinarium), the forge (fabrica), etc; and as a great variety of troops then came to be employed, they had new stations appointed to them in the camp. Standing camps were divided into castra aestiva, a permanent summer camp, and a castra hiberna, a permanent winter camp. Many of the stationary camps ultimately grew into towns – an origin seen in the names of such English towns as Colchester, Winchester, Manchester, and Chester itself. Among the most perfect in Britain of those which retained the form of the simple encampment, is that at Ardoch in Perthshire, in the grass-covered mounds and ridges of which most of the divisions of the camp have been distinctly traced.