Under the Empire a Roman legion was divided into 10 cohorts (battalions), 30 maniples (companies), and 60 centuries (platoons). In the time of the Empire the legion might contain 5,000 men and in some cases even 6,000. 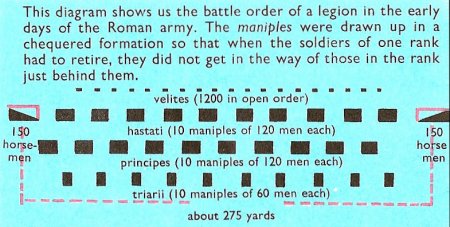 It can be said that the Roman army was born with Rome itself, for the founders of the city had to take up arms at once to defend themselves against the attacks of the neighboring Latin peoples. Throughout the centuries, the Romans owed their victories over so many peoples, some of whom were of great military strength, to the superiority of their arms and military organization.

In Rome it was the duty of every male citizen to provide himself with weapons and to serve in the army at his own expense. The very poorest were excused from this obligation but, in cases of great need, they too were armed at the expense of the State. Citizens between the ages of 17 and 45, called juniores (young men), formed the regular army, while those from 46 to 60, called seniores (elders), formed a kind of territorial force, which was employed only behind the lines. The moment he entered the army every citizen had to take this oath: "I will obey my superiors and will carry out all their orders so far as I am able." Under the Monarchy and throughout the period of the Republic the army was enrolled only in time of war. Under the Empire the character of the army changed; it became professional and included a large number of other troops besides legionaries.

Military training was carried out on the Campus Martius (Field of Mars, the god of war) on the left band of the River Tiber, which flows through the city of Rome. The recruits, that is the newly enlisted soldiers, were drilled in javelin throwing, the handling of the shield, and in wrestling, jumping, swimming, and marching. Each recruit planted a stake in the ground and then practiced on it with his sword, as though it were an enemy.

To prove that they could stand up to fatigue, the young men used to practice with much heavier weapons than those they would use in war. To spur the young men on the citizens were encouraged to watch the drilling of recruits and to cheer the strongest and most daring.

When the individual soldiers were trained, they were formed into groups for further training. This consisted mainly of long route marches in full battle gear, and of practicing to get into fighting positions quickly from the line of march.

The Roman army was divided into legions. In the early years of the Monarchy there was only one legion of 3,000 infantrymen (front soldiers) and 300 cavalry. Then, as the Roman state grew bigger, it gradually became necessary to enlarge the army; a beginning was made by splitting it into two legions, each of which could put 4,200 soldiers in the field.

As time passed, the number of legions grew; but for many centuries each legion remained the same size. Legions of 4,200 fought against Hannibal in the Second Punic War (218–201 BC); but by the time of Julius Caesar, in the first century BC, a legion could contain as many as 6,000 men. Under the Empire the number of legions, each of 5,000 or 6,000 men, was increased to 33. At first a legion contained 300 horsemen, but later this was increased to 900. When the army became very large, it was found necessary to divide each legion into several groups, each of which could fight on its own. So every legion was divided into 30 maniples and each maniple was in turn divided into two centuries.

In battle the legion was drawn up in three ranks. In the first were found the hastati, in the second the principes, and in the last the triarii.

All these soldiers made up the regular legion, to which, however, was added a body of 1,200 troops called velites (from Latin velox, swift) who were lightly-armed so they could move more freely. It was their job to engage the enemy first and then, during the battle, to go to any point at which their help was urgently needed.


The legion in action

The velites were the first to go into action; they challenged the enemy to battle by slinging stones and throwing javelins. Meanwhile, the three ranks of legionaries made no move. While they waited for the order to attack, the hastati and principes stood up, but the triarii knelt on one knee, completely covering themselves with their shields. The hastati were the first to attack; but if they failed to scatter the enemy, they fell back and gave way to the principes. If these two were beaten back by the enemy, the triarii came forward, while the principes and hastati re-formed their ranks, ready to take their place in the line once more. When the enemy retreated, it was the task of the velites and the cavalry to pursue them. In fact, the legion was organized in such a way that it could carry out a great number of maneuvers in a very short time. It was this orderly system of fighting which, beyond everything else, made the Roman army the most powerful military force of ancient times.


The arms of the legionaries

Because they were continually kept in training, Roman soldiers could manage their weapons with surprising agility. The arms used by the legionaries were:


The velites, who were what we should call light infantry, were armed with a bow, sling, and javelin. The latter had a shaft much shorter than that of the pilum.

The horsemen were armed with swords and lances.

The soldiers were protected in battle by a helmet, a breast-plate or cuirass, and greaves. The helmet was usually made of leather, strengthened with metal plates. The cuirass was made originally of hide but later of bronze or iron plates, arranged like the scales of a fish. The shield, which was about 4 feet 6 inches long and 3 feet wide, was of wood, covered with bull's hide. In the center there was a metal plate. The greaves were usually of bronze and protected the legs and particularly the shins.

For a long time the standards used in the Roman army bore either models of animals or an open hand, but about 80 BC the legions were given standards representing an eagle, which might be of gold, silver, or bronze, placed on the top of a long staff. All along the staff of each legion's standard were hung the decorations which that particular legion had won in battle. The standard was carried by a standard-bearer, called an aquilifer (eagle-bearer). In battle the standard-bearer's post was with the triarii and it was his duty to defend the eagle at all costs, because it was a disgrace to let it fall into the enemy's hands.

Under the Republic the Commander-in-Chief of the army was the Consul. He was assisted in his command by two high-ranking officers called legates. Each legion was commanded by six military tribunes, who took it in turn to command. At the head of each century was a centurion and, since the maniple consisted of two centuries, it was commanded by two centurions.