In his cabin aboard ship, surrounded by nautical instruments, Vespucci studies a chart. In the center foreground is a quadrant; on the right is an armillary sphere, which represents the solar system. 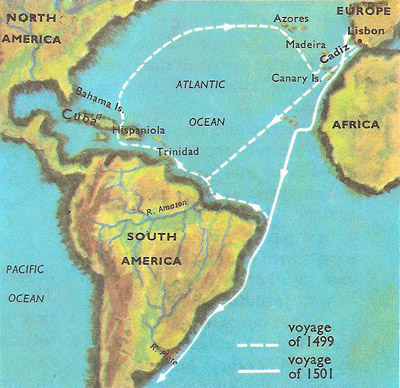 In the summer of 1499 Amerigo Vespucci, Italian-born explorer, discovered the West Indian island of Trinidad. As soon as he landed for the first time, he was invited by the natives to step into their huts. Encouraged by their friendliness he did so – to find, piled up in a corner of the first hut, a vast heap of human bones. It was too late to escape; so, feigning unconcern, Vespucci looked questioningly at the old man who was leading him and who, of course, couldn't understand the explorer's language.

The latter explained by gestures that his countrymen often visited nearby islands to carry off men and women to eat. They tasted, he added, excellent. Vespucci suppressed a shudder and airily changed the subject to ask his guide how old he was. The old man pointed at his necklace, which consisted of a bead for every year of his age – more than a hundred of them.

Vespucci was then introduced to other men, all of whom claimed to be centenarians. The explorer congratulated them on their longevity and then proceeded to hand out bright scarves and pieces of colored glass that he'd brought with him.

By his calm behavior Vespucci not only escaped being eaten, but when he finally returned to his ship he was accompanied by an escort of natives, who bade him farewell with great courtesy.

Everybody knows that Christopher Columbus discovered the New World. But the new Continent was not named after Columbus (although there is a South American state called Colombia). The man whose fame the word America proclaims is Amerigo Vespucci.

In fact, the credit for discovering quite a large part of America should go to Vespucci. Exactly how much is uncertain, as historians disagree over precisely where he went, and even over how many voyages he made to the New World. It was once believed that he made four; but only two are certain.

Vespucci's first certain voyage began in May 1499. He set out from Cadiz in Spain with a flotilla of four ships under the command of the Spanish explorer Alonso de Ojeda. However, the two men disagreed over their route and so, on reaching the coast of Guiana in South America, they split up, Ojeda sailing northwards and Vespucci to the south. In the course of this journey Vespucci discovered the Amazon, the second longest river in the world, and even sailed some way up it. He continued southwards as far as the cape of La Consolacion, six degrees south of the equator, before turning round to sail back to the West Indian island of Haiti (then called Hispaniola) where he and Ojeda had agreed to meet again for the homeward journey.

It was during this voyage that Vespucci visited Trinidad and had the strange adventure described earlier. He is also said to have had another extraordinary adventure when he landed on the coast of Curacao, to be met by some enormous women well over 6 feet tall. But, as in Trinidad, he was saved by his presence of mind, and managed to make friends of the giantesses and their equally large menfolk.


Disappointment and another voyage

Arriving home safely in June 1500, Vespucci hoped to set out quickly on a new voyage. However, he found that King Ferdinand and Queen Isabella of Spain were not interested in financing it, and so he had to wait. Fortunately the King of Portugal was prepared to help, and in May 1501 Vespucci set sail from Lisbon, the capitol of Portugal.

This time he headed farther south than before, reaching the coast of Brazil at Cape Sao Agostinho. He continued down along the South American coast, discovering the river Plate and possibly even going beyond.

The route by which he returned is not recorded. All that is known is that he arrived back in Lisbon on July 22, 1502.

This second voyage of Vespucci's was a landmark in the history of discovery. Hitherto, like Columbus, and everybody else, he had believed that the newly discovered land was all part of Asia; and like the rest he had still been searching, above all, for a sea route to the Far East. But during his second voyage Vespucci hit on the truth: he and his fellow-explorers had discovered not Asia but a new continent – the New World, as it became known.

Vespucci may possibly have made a final voyage, in 1503, for the Portuguese government; but even if he did, nothing new was discovered. Quite soon he went back to Seville, where he was employed in 1505 by Casa de Contratacion de las Indias (Commercial House of the West Indies). His title was Piloto Mayor (Chief Navigator), and his job was to oversee preparations for voyages and to make maps of the New World. He died in the post in 1512.


He starts as a banker

Amerigo Vespucci only went to sea late in life, though this did not prevent him making extremely important discoveries. He was born in Florence in Italy on March 18, 1454, had a classical education, and first appeared in public life when he was sent by the government of Florence on a diplomatic mission to the King of France. This was in 1479, when he was 25 years old. When he came back he went into the bank owned by Medici, Florence's great family of financiers and politicians. He made a success of this career, and in 1492 he was sent to Spain, where the Medici had a business in Seville run by a man called Giannotto Berardi, with whom Vespucci was to work.


The world of exploration

Berardi had already helped to prepare Christopher Columbus's first voyage over the Atlantic Ocean in 1492. Vespucci was probably in Spain when Columbus returned from this journey; certainly he helped Berardi to make ready ships for Columbus's second and third voyages. It was in the course of this work that he got to know Columbus personally.

When Berardi died, in 1493 or 1496, Vespucci became manager of the business, and he stayed in Seville until he took up exploring himself.