Figure 1. The wampum belts used by native North Americans conveyed messages by means of pictures. Here the two pictures represent the Moqui and the president of the United States; the Moqui are offering friendship and negotiation. These belts are better classed as 'mnemonics', that is, as aids to the speaker, than as writing in the form of pictures. 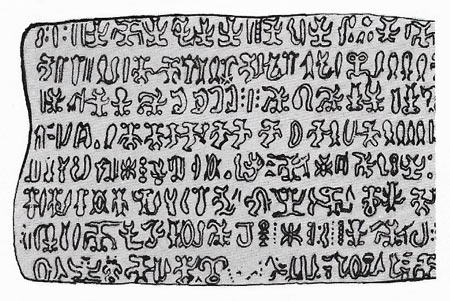 Figure 2. The Maya had a highly developed writing system, but their manuscripts were almost totally destroyed by the Spanish invaders. 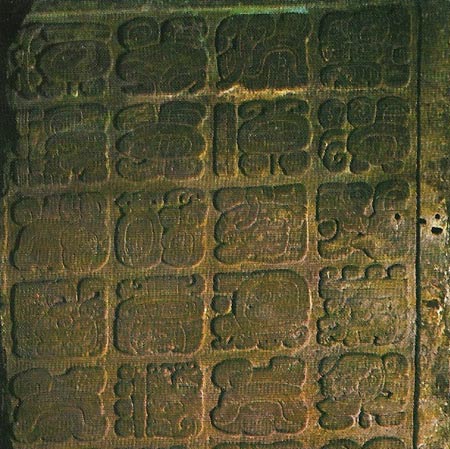 Figure 3. The script from Easter Island (as yet undeciphered) has carved characters incised on wood with a shark's tooth. 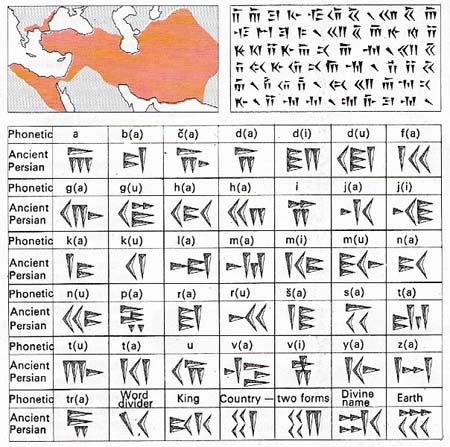 Figure 4. The wedge-shaped writing known as cuneiform was developed because of the ease with which such strokes could be imprinted on wet clay, the normal writing material used for this script. This example is of a relatively late cuneiform script developed in the ancient Persian Empire in 500 BC. The external form of the script is the sole connection with the earlier ideographic cuneiform writing of Mesopotamia. The 42 signs shown were created from the Neo-Babylonian model: 36 of these have the value of either a vowel or a vowel plus a consonant; four signs are true ideograms and two are word dividers. The script was written left to right. 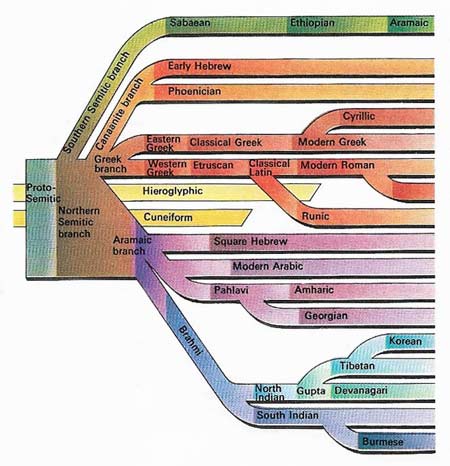 Figure 5. As seen in this diagram of the history of the alphabet, North Semitic is the precursor of all alphabetic writing systems, but no link has yet been established between it and Egyptian hieroglyphics or cuneiform writing. 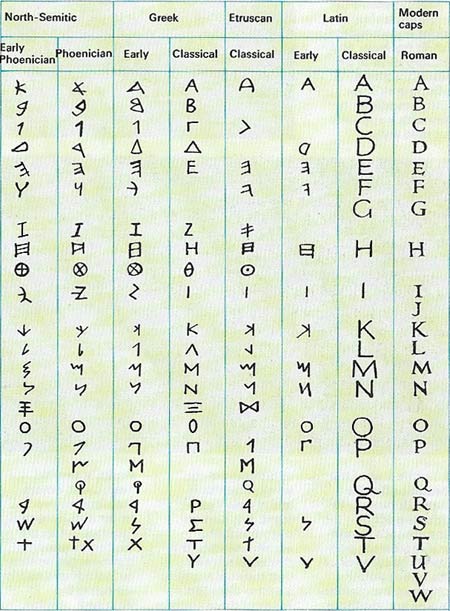 Figure 6. The development of the modern alphabet from North Semitic, to Greek, Etruscan and Latin.

Human communication has two primary forms: the transient, e.g., speech and sign language; and the permanent or semipermanent, of which the most important is writing. Forerunners of writing are the used of carved sticks or knotted cords to convey information; but the earliest forms of writing was the pictography of ancient Sumeria and Egypt. Originally, the pictographs depicted objects, but some 5,000 years ago there developed ideograms (representing ideas) and logograms (words). Sumerian cuneiform and Egyptian hieroglyphics had complex word signs; as does Chinese to this day. The Hittites, Egyptians, and Mesopotamians derived symbols for specific sounds; that is, phonetic writing. During the second millennium BC the Semitic alphabets emerged, and from these were derived the Greek and later Roman alphabets and so, in time, our own.

Paleolithic man's cave paintings may have been an attempt to convey ideas; communication by means of pictures is a recurrent feature in primitive societies (see Figure 1). From this it is only a short step to picture-writing, in which a circle, for example, may represent the Sun. Ideograms are a natural progression from picture-writing with the circle of the Sun representing related ideas such as 'heat, 'light', and, eventually, 'day'.

Ideograms form a recognizable feature of such diverse writing as Mayan glyphs (see Figure 2) and the mysterious script of Easter Island in the Pacific Ocean (see Figure 3). They can still be recognized in much more sophisticated writing systems such as Egyptian hieroglyphics. Of its 600 signs some are words ('man', 'look'), some determinatives that indicate how the preceding signs are to be understood (for example, as an abstract idea), whereas still others are used for syllables and single sounds, thus foreshadowing a true alphabet.

The earliest known script that can properly be called writing was devised by the Sumerians in the fourth millennium BC. The cuneiform (wedge-shaped) script derives ultimately from ideograms, but soon became a system of conventionalized characters, each having a distinct phonetic sound value (see Figure 4).

Most important of the non-alphabet scripts is Chinese. Its characters, derived from ideograms,each represent a complete word, with the result that the Chinese scholar must be conversant with about 9,000 different symbols whereas everyday writing uses as many as 1,500 to 2,000 characters (see Figure 6). Most characters are compounded from a radical element, giving the meaning, and a phonetic element indicating the pronunciation. The phonetic 'fang' when compounded with radical 'tree' gives the character for 'timber'; whereas when compounded with the radical 'word' it produces the character for 'to inquire'. Traditionally Chinese was written right to left in columns; today it is usually in lines from left to right.


The development of the alphabet

Picture-writing and ideographic scripts arose independently in different parts of the world. In contrast the alphabet was probably invented only once, by the Semitic people inhabiting the Syria-Palestine area in the latter part of the second millennium BC. This first alphabet (North Semitic) consisted of 22 characters, each representing a consonant, written right to left. It had two main branches, each of which led directly to classical Hebrew and Aramaic and, indirectly to Arabic. In its present form Arabic consists of 28 letters and is the most widely used alphabet in the worlds apart from the Latin alphabet. All these alphabets are consonantal and written right to left.

In the spread of the alphabet eastwards, the role of Aramaic, the lingua franca of the Middle East for centuries from the sixth century BC, was crucial. It is from this, most scholars now believe, that all the various alphabets used in India and South-East Asia ultimately derive, both the angular forms such as Devanagari and Sanskrit and the round forms such as Burmese.

The other main branch of the alphabet was brought to the West by the Phoenicians, reaching the Greeks by about the ninth century BC. It is certain that the Greeks derived their alphabet from North Semitic; for example, in the Semitic alphabet each letter was given name: aleph 'ox', beth 'house', and so on. These were taken over by the Greeks as alpha, beta, etc (this giving our word 'alphabet'), although they have no meaning in Greek. The Greeks made one fundamental innovation: the introduction of vowels. Their alphabet came to consist of 17 consonants and seven vowels.

The Greek alphabet reached the Roman through the Etruscans and resulted in the classical Latin alphabet of 23 letters, the parent of the present-day Western alphabet. Subsequent changes have been limited to the introduction of w and of separate forms for i and j, and for u and v. The important part played in the dissemination of this alphabet by the Roman Catholic Church is clearly shown by the scripts of the Slavonic peoples; those converted to Roman Catholicism (Poland) use the Latin alphabet whereas those converted to the Greek Orthodox religion (Russia) use the Cyrillic alphabet. Cyrillic, invented in the ninth century and traditionally ascribed to St Cyril of Byzantium, consists of 24 letters taken over from Greek uncial (a form of writing in rounded letters) to which 19 new characters have been added. See Figure 5.

An ideal alphabet should consist of symbols that are distinct and easy to remember, but at the same time capable of representing all significant speech sounds. In our alphabet the first requirement is admirably fulfilled, but the second much less so. In English, for example, five vowel symbols must represent 12 vowel sounds and eight diphthongs. Some modern languages compensate for this limitation by introducing additional, distinguishing marks, such as the umlaut that is used in Germanic languages.