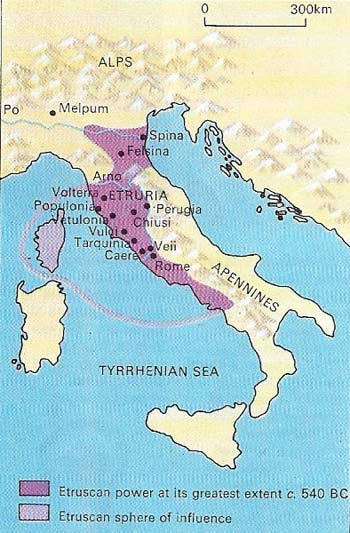 Fig 1. The Etruscan home territory lay between the Arno and the lower Po. It was there that the distinctive civilization arose and reached its highest development. The frst Etruscan settlements were on the coast – Vetulonia and Tarquinia bring the earliest. Then came Vulci, Caere, and Volterra, and the inland cities of Perugia and Arezzo.At its widest, c. 535 BC, Etruscan power extended to the Alpine foothills and south to the Gulf of Salerno. But this was not an empire; instead it was a loose federation of independent city-states with no common front.

Fig 2. The Etruscans building one of their cities on the sea. 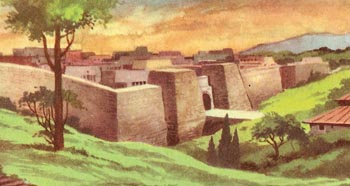 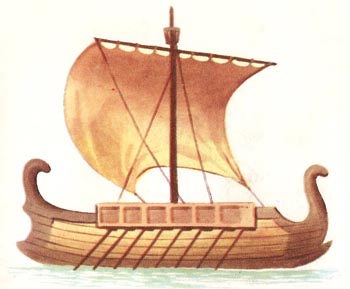 Fig 4. Reconstruction of an Etruscan ship. Being astute merchants, the Etruscans had commercial relations with the Carthaginians and the Greeks, whose dress they often imitated, and sailed to the ports of Spain, the Balearic Islands, and Asia Minor. 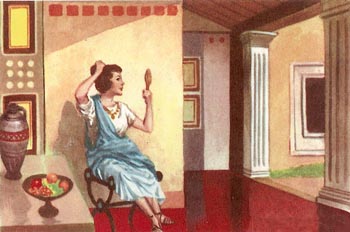 Fig 5. Inside an Etruscan room. 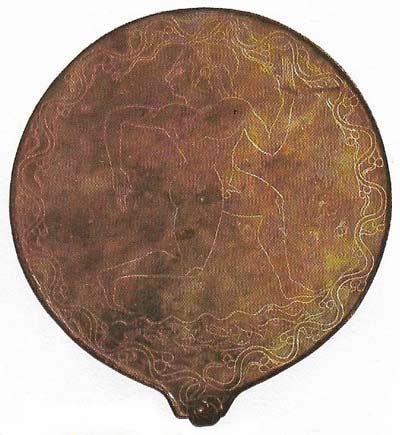 Fig 6. Mirrors of polished bronze assisted Etruscan ladies at their toiletries. The reverse side of mirrors such as this (c. 540–530 BC) was often engraved with mythical scenes – in this example Orion is crossing the sea – in an incised drawing. Mirrors were objects commonly buried with the dead.

Fig 7. Jewelry reached a high level of development with the Etruscan civilization. The Etruscans were particularly skilled goldsmiths and a number of superb pieces decorated with fine granulation have survived. This fibula or safety pin dates from 700–800 BC. It is an exquisite piece, demonstrating the quality and originality achieved by the Etruscans. 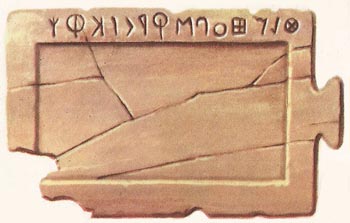 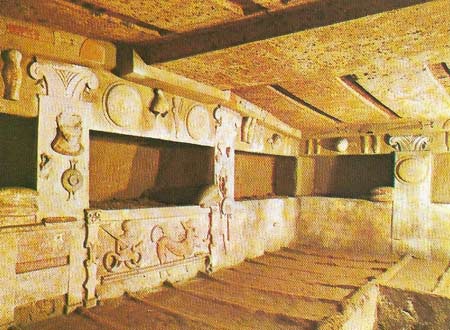 Fig 9. The Tomb of the Reliefs at Cerveteri is carved in the solid rock to represent a room in a house, with raftered ceiling supported on pillars, proto-Ionic capitals and bed niches in the walls. A series of funerary beds, each with two pillows, some even with a footstool and slippers awaiting their owners, is then added in stucco. Above the niches are displayed pieces of armor and weapons in relief – shields, helmets, leg armor, swords. The central pillars are decorated with a wide variety of tools and implements used in day-to-day life. This tomb is the only one of its kind. 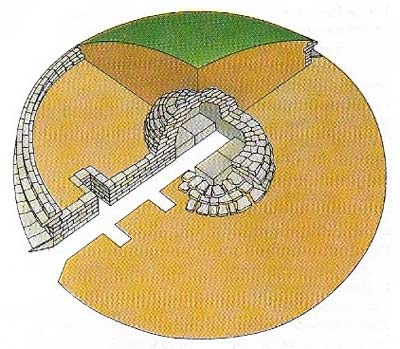 Fig 10. Types of tombs differed from city to city. At Populonia, a corbel-vaulted chamber of stone was covered by a hemispheric barrow within a stone retaining wall. The Tomb of the Chariots, shown here, contained two chariots fitted with bronze and iron decoration on ivory, and a bronze trumpet as well as gold jewelry amd fragments of weapons and armor. The tomb dates from the 7th century BC. Many tumulus tombs were also erected by Cerveteri. 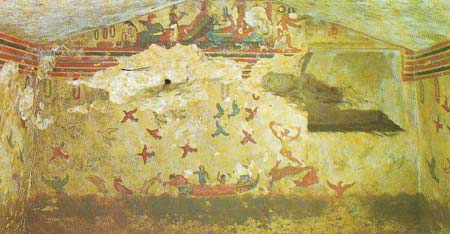 Fig 11. The Tarquinian tomb type was a rectangular chamber cut in the rock and approached by a sloping ramp. The chambers were then plastered and painted with vivid scenes of the highest beauty and significance. On the end wall of the Tomb of Hunting and Fishing (c. 520 BC), the funeral feast occupies the gable, with a frieze of mourning wreaths below. Fish leap all around the men in their boat, and a slinger ashore at-tempts to bring down one of the many gaily colored birds that cover the ceiling. The funeral banquet was a common motif, coupled in other tombs with frescoes that pictured dancing and athletic contests in honor of the dead. 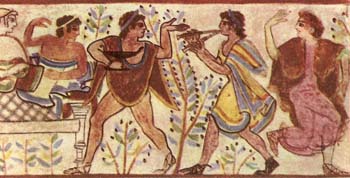 Fig 12. Reproduction of a mural in an Etruscan tomb showing a banquet. 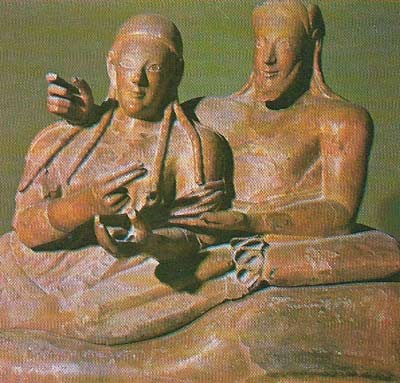 Fig 14. This married couple is sculpted in life-size on the lid of a terracotta sarcophagus from Cerveteri (Caere).

The Etruscan civilization covered a large portion of northern Italy (Fig 1) and endured from about 900 BC to the late fourth century BC when it became absorbed into Roman culture. As for its origin, ancient records provide contrasting views: Herodotus declared that the Etruscans sailed from Lydia in Anatolia to colonize a new territory in the west: and Dionysius of Halicarnassus argued that they were natives of Italy. Today both views are regarded favorably, and both are at least partly right.

Certainly the argument for continuity between the Villanovan settlements in northern Italy (c. 1100–700 BC) and cemeteries of the ninth century BC and the Etruscan cities and cemeteries of the early seventh century BC on the same sites is stronger than ever. Most of the population and much of the culture can be traced beyond this, back into the Bronze Age. Conversely, at several stages new ideas and cultural traits from abroad could well have arrived with bands of new immigrants.

The main areas where the first Etruscans settled were almost everywhere covered with woods, thickets, and marshes inhabited by wild boars. Glades were opened up in the woods and on them were built the first huts, stone houses, and villages. Gradually they conquered the surrounding territory, crossed the Apennines and settled in Umbria and Latium, reaching the plain of Padua in the north and the Campagna in the south. The primitive villages developed into towns surrounded by strong walls (Fig 2, 3). Thus began the story of the Etruscans.

The great flowering of Etruscan culture took place in the seventh and sixth centuries BC, building on local foundations, themselves supported by the wealth of the metal resources of Etruria (present-day Tuscany), but strongly influenced by Greece and many other east Mediterranean lands. Indeed this variety provides a strong argument against Herodotus' story of a homeland in Lydia.

Etruscan civilization as a whole is puzzling. The general impression is very Greek. Only on closer inspection of the details does it become apparent that, however Greek in inspiration, everything has been transmuted and absorbed. This, and the grafting on of other Asiatic ideas, like divination and tumulus tomb building, and the development of purely local traits like the high-quality black bucchero pottery, enable historians to think of Etruscan civilization as something in its own right, not merely a provincial version of the civilization of Greece. Yet politically the two peoples appear to have been bitter enemies, Etruscan history having as its constant theme the attempt to bar the Greeks from the Tyrrhenian Sea. By one sea battle, the Greeks were expelled from Corsica in 535 BC, at the height of the Etruscan political domination.

The Phoenicians played a part in this story too, as intermediaries between Etruria and the Orient. Here political relations were more cordial, Etruria and Carthage being often in alliance against their common enemy, the Greeks. At Pyrgi, a port of Cerveteri, a dedication was found to Uni (Juno) – the goddess Astarte – engraved on gold plates in parallel texts, one in Phoenician, the other one in Etruscan.

The tablets found at Pyrgi proved of great help in advancing our knowledge of the Etruscan language, the most important unifying link between the Etruscan peoples. Since they had adopted the Greek alphabet with little change (Fig 8), there has never been any great problem in deciphering their writings. Translating them has proved much more difficult because all attempts at identifying the language with a known one have failed. It seems to have been the only survivor of those tongues spoken before Indo-European was introduced into the area. Little by little, however, the scholars' competence in translation increased, beginning with such tomb inscriptions as "X son of Y, aged Z years". But the few longer texts are obscure ritual documents, and yield so far little more than the general drift. The longest of such texts so far discovered was written on linen.

United by language, the Etruscans were less uniform in culture. There are clear differences (as in tomb architecture) between the Etruscan cities, mirroring their political independence (Fig 9, 10, 11). All, however, give a picture of an energetic, happy people with a bold and attractive art. Although much of the evidence comes from tombs (12, 13, 14), it is by no means a somber picture. Their temples and cities too were architecturally exciting, and their civil engineering of a high order. A ship canal at Cosa, the channeling of streams below ground to prevent soil erosion, and their practice of tunneling rivers below roads instead of building bridges over them, demonstrates these skills.

What survives from Etruscan civilization is to be found in the romantic ruined sites and cemeteries, and vast museum collections looted from these. But their place in history is assured by their contribution to Roman civilization. The end of the Etruscans probably came in the fourth century BC, because they had failed to present a common front and so fell individually to the Romans. However, the Romans' origins lay beneath the shadow of their rich and powerful neighbors and enemies. Much of the Greek civilization they adopted came to them not only through Etruscan hands but in Etruscanized form. What was non-Greek in Roman life was often pure Etruscan; for example, the realism of their portraiture and their religious practices and divination. Many Roman families had, and were proud of, Etruscan origins.

Religion and language of the Etruscans

They were strong believers in divination – that is to say, the art of knowing the will o the gods. The Etruscans had a great cult for the dead, whom they buried in underground rooms which were often grandiose and magnificently painted.

The Etruscans left many writings on tombstones, tablets, cups, and vases. But although they used the same alphabet as the Greeks, the words were quite different and only a hundred or so of them have been deciphered. Until some bilingual inscription is found, as happened in the case of Egyptian with the Rosetta Stone, the Etruscan language will remain a mystery.

The Etruscan cities, like those of the Greeks, were independent of each other. They were small states, each governed by a leader called the Lucumone. Each had to provide for its own defense in case of war: for this reason the Etruscan towns were situated on isolated hills and surrounded by strong walls.

The boundaries of a town were square. When the Etruscans founded a town, they used a plow to mark the furrow along which the foundations of the wall were to be laid. At some points the plow was raised out of the ground to leave a gap for the gates.

The Etruscans brought house-building methods with them from Asia. The houses were square and the windows looked an to an inside courtyard. Instead of a vault, they used an architrave (horizontal piece of wood) to support the roof or the floor above. The building techniques were later adapted by the Romans.

As the Etruscans liked to live in comfort, their houses were furnished with carpets, couches, large tables for banquets, and attractive ornaments. Above all they had beautiful vases used for storing things, mixing things, and for drinking.

The Etruscans were a lively and cultured people, and enjoyed their recreations. They were fond of good food, dancing, sports. hunting, personal ornaments, and fashion.

Perhaps the most famous Etruscan today is Lars Porsena of Clusium (capital of Etruria). In about 500 BC he marched on Rome to restore the banished Roman king Tarquinius Superbus. The story of this is immortalized in the poem Horatius by Thomas Babington (Lord) Macaulay.

Although his army was large, he was held up by Horatius and two others who defended a bridge until it could be destroyed.

But all Etruria's noblest
Felt their hearts sink to see
On the Earth the bloody corpses,
In the path the dauntless Three:
And, from the ghastly entrance
Where those bold Romans stood,
Like boys who unaware,
Ranging the woods to start a hare,
Come to the mouth of the dark lair
Where, growling low, a fierce old bear
Lies amidst bones and blood.

Greeks to the rise of Athens