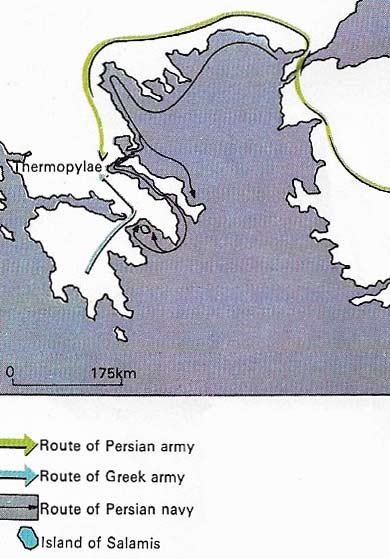 Fig 1. After the Persians overran Athens, the refugees fled with the Greek navy to Salamis. There, by a stratagem the Greeks trapped the Persians and destroyed an entire corps as well as 200 Persian ships for a loss of only 40 of their own. 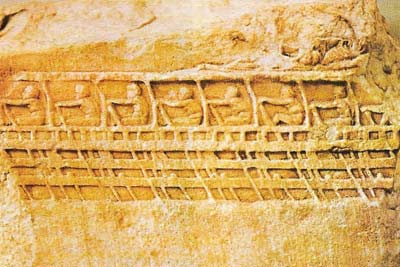 Fig 2. An Athenian trireme was the type of warship that defeated the Persians at Salamis and was the mainstay of the powerful navy built up under the direction of Themistocles at the beginning of the 5th century. The navy was significant in the democratic system, for it was largely manned by the poorer citizens and provided them not only with a livelihood but also with a source of pride and power. Since much of the wealth and power of Athens came from trade and her maritime empire, the common people could assert that they were the backbone of the state and should play a major part in its political life. 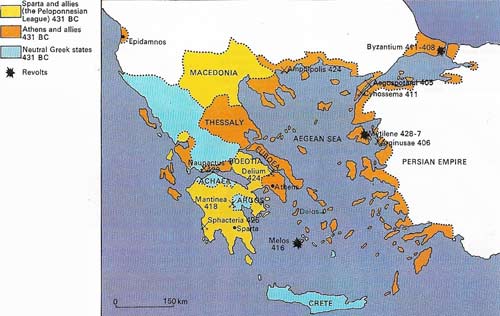 Fig 3. After the defeat of the Persians, Athens used its navy to secure the Aegean against them and to liberate the Greek states in Asia Minor. Soon the defensive Delian League was turned into an aggressive empire with Athens intervening directly in the internal affairs of allied states. Sparta's fear of this expansion caused it to encourage revolts and oligarchic governments, and led in 4.31 to the start of the Peloponnesian war which engulfed most of Greece. 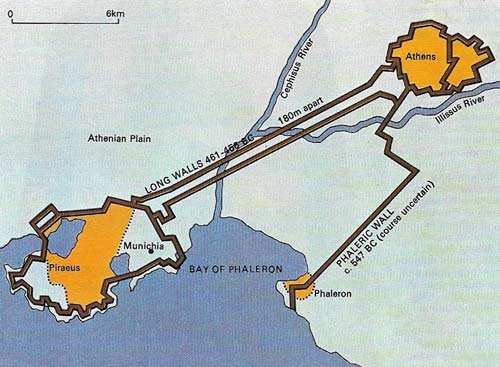 Fig 4. Themistocles began the development of Piraeus as the base for Athens' navy and its vital trading and commercial port. The Long Walls were built to link it with the city and give Athens the means to maintain her maritime power even when its territory was invaded. It was symbolic that when Athens was defeated in 404, the Spartans insisted on the immediate demolition of the walls.

Fig 5. Throughout the Classical age there was almost continual fighting between city states. This weakened the Greeks politically, but did not prevent a flowering of the arts, literature, and philosophy. The above relief comes from a Hellenistic sarcophagus found at Tyre and depicts The Death of Hector. 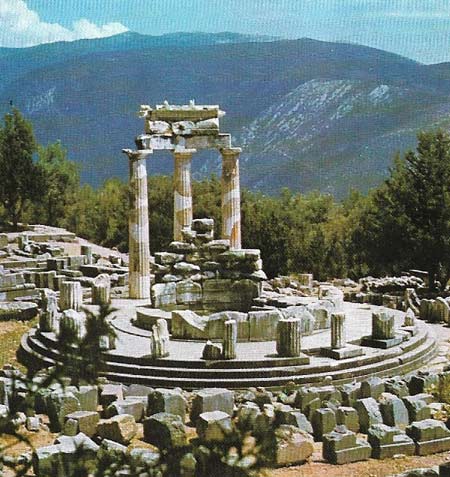 Fig 6. The Temple of Athena at Delphi, whose oracle was presided over by Apollo, was part of the widely respected shrine in ancient Greece. Religion in the Classical age was an affair of sacrifices and ceremonies by the state or individual that contained little moral guidance or mystical experience. However, a belief in the same gods and legends did promote the feeling of a common culture which was added to by semi-religious festivals such as the Olympic games.

In 480 BC the Persians under Xerxes launched a second invasion of Greece. A large army advanced across the Hellespont and down the peninsula; it was briefly halted by the heroism of 300 Spartans under their king, Leonidas, who held the narrow pass at Thermopylae until outflanked. They fought to the last man. Athens was occupied but shortly afterwards its fleet, led by the statesman Themistocles (c. 528–c. 460 BC), annihilated the Persian force at Salamis (Fig 1). Xerxes' army fell back northwards and in 479 BC it was defeated at Plataea by a largely Peloponnesian army under the Spartan Pausanias. If the Greeks had not defeated the Persians, the history of Europe might have been very different – a dominant Persian civilization would have left Europe with quite another set of values and institutions.


The golden age of Athens

The Persians withdrew but their threat remained and a defensive league of many of the Aegean islands and Greek states in Asia Minor was set up in 478 BC under Athenian leadership, with its headquarters at Delos (Fig 3). A navy was established, maintained by contributions of money or ships.

Soon Athens, as the most powerful Greek state, came to dominate the Delian League and, under the guidance of her statesmen Cimon (died 449 BC) and Pericles (c. 490–429 BC), became a maritime empire in all but name. The democratic system was refined under Pericles, and the great buildings and cultural achievements that were to make Athens famous grew from trade.

Inevitably, the power of Athens aroused jealousy and fear, particularly in Sparta, which continued to dominate the Peloponnesian states, and Corinth, the other great trading state. There was sporadic warfare during the 450s BC and Athens built up an empire in Megara, Boeotia and Achaea, but this was abandoned in 445 BC after concluding a truce with her rivals. Hostilities broke out again in 431 between the rival alliances and Athens, secure behind the Long Walls linking her with her major port of Piraeus (5), allowed the Spartans to invade Attica and instead concentrated on using her maritime power to wear down her enemies.

Pericles died of plague in 429, but his strategy was continued by Cleon (died 422 BC). Neither side could decisively defeat the other, and a peace was reached in 421. This lasted only two years before fighting broke out again; in 415 the war party in Athens led by Alcibiades (c. 450–404 BC) persuaded the people to launch a major expedition to invade Sicily and capture Syracuse. The venture was a ghastly failure, and in 413 the bulk of the Athenian army and navy were destroyed. Despite the disaster Athens fought on, although her enemies were now being financed by the Persians and several of her allies revolted. In 405 the remainder of the Athenian navy was surprised and destroyed at Aegospotami by Spartans under Lysander (died 395 BC), who then besieged the city. When it surrendered in 404, an oligarchy replaced democracy, and the Spartans took over the Athenian Empire.

This Spartan supremacy was short-lived; spurred on by the exploits of Xenophon's Ten Thousand – Greek mercenaries who made an epic march across the Persian Empire – a crusade was launched to regain the freedom of the Greek states in Asia Minor, but the Persians encouraged the Spartans' allies to turn against them and the attempt had to be abandoned in 387, leaving them under Persian domination.

The next 50 years show the worst features of the Greek political system of the Classical age, with petty jealousies and continual military rivalry preventing the emergence of any wider unity. Athens recovered quickly, democracy was restored in 403 and by 377 she was again leading a naval confederacy against Sparta. However, it was Thebes that became the next dominant power when it destroyed the Spartan army at Leuctra in 371. After a decade she too began to decline, and Phocis, by capturing the treasure of Delphi, was able to hire mercenaries and set up a temporary mastery.

Interstate rivalries continued and prevented the Greeks from realizing that a new threat was growing in the north. The Macedonians had hitherto been a loose confederation of tribes, but in 359 Philip II (382–336 BC) became king. A fine organizer, general and diplomat, he unified the tribes in his own kingdom and then went on to annex Thessaly in 352 and Thrace in 342.

The Athenians were the first of the Greeks to become aware of this new danger, for Philip's power threatened their lucrative trade routes to the Black Sea. However, years of relative peace had made the people of Athens apathetic and lacking in military zeal. A few orators such as Demosthenes (died 322 BC) tried to arouse them to the danger to their trade and to their city, and to exhort them to put an end to traditional rivalries so that the Greek states could unite against this new peril. Eventually a Greek league was formed, but in 338 Philip routed its armies at the battle of Chaeronea and occupied Thebes. Athens prepared to continue its resistance but there was little support elsewhere and at the Congress of Corinth a new league of Greek states was set up under Macedonian leadership. The independence of the free city states was at an end.

Greeks to the rise of Athens