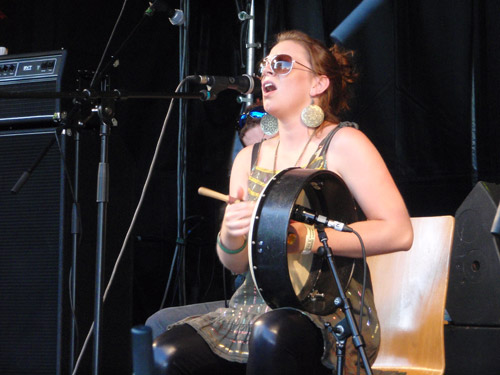 A bodhrán is an Irish drum covered with a goatskin head. The bodhrán has a circular frame, 30–45 centimeters (12–18 inches) in diameter. It is played with a double-headed stick, with brushes or with knuckles and fingers. The frame is bent from green wood, and is held in shape by crossbars to prevent the drum from warping. It is held vertically, with the left (or non-dominant) hand holding the cross bars, and the right hand playing the instrument.

The bodhrán has existed in Ireland for centuries, but has only been used in traditional music performance since the 1960s – previously being used in warfare and celebrations as a noisemaker.

Contemporary performing techniques focus on producing a range of tones for the drum. These include pressing the left hand or a slide bar against the skin to vary the pitch while playing, dampening the sound with the flat of the left hand, and creating a more ringing sound by pressing with the edge of the left hand while playing the drum with the right hand. The drum can also be played on the rim, and can have shakers and bells attached to the crossbars.

The bodhrán is played in Irish traditional music and in Celtic folk-rock music. It also appears in Peter Maxwell Davies' Fifth Symphony.

Being a frame drum, the bodhrán is similar in this respect to the tambourine.