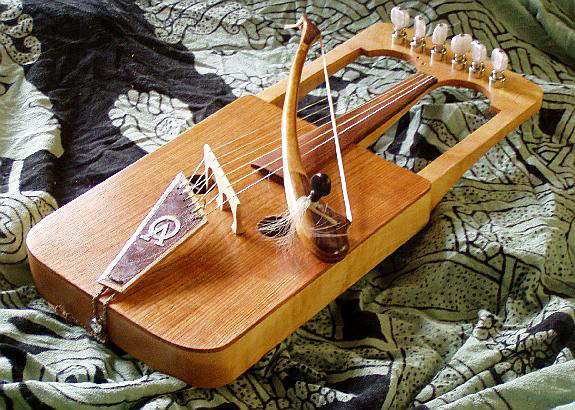 Nordic bowed lyres, known in Finland as jouhikko, in Estonia hiiu-kannel and Sweden as strakharpa, comprise a more or less rectangular soundbox, across which run three or sometimes four horsehair strings.

These pass from a tailpiece across a bridge resting on the soundboard to tuning pegs on a flat extension of the body. This extended section has an aperture that allows access from behind for the player's left hand to one, two or more of the strings. The melody is played on the first string, which is stopped with the back of the fingers; some players, particularly in Estonia, also stop the second and occasionally third string.

The crwth, surviving in Wales, was once also played in England and other parts of Europe. It is related to the Nordic bowed lyres, but it also has features of a fiddle. Although it has two arms springing from the soundbox in lyre fashion it also has a neck with a violin-type fingerboard running up the middle of the space between the arms, against which four of the six gut strings are stopped. The other two run beside them, playable with the bow or left thumb as drones. All go to tuning pegs on the bar between the lyre-like arms.

As with the Bulgarian gadulka and liras of Calabria, Dalmatia, and Crete, one leg of the bridge goes through one of the two soundholes beside it, and rests on the back of the soundbox, forming a sort of sound-post.