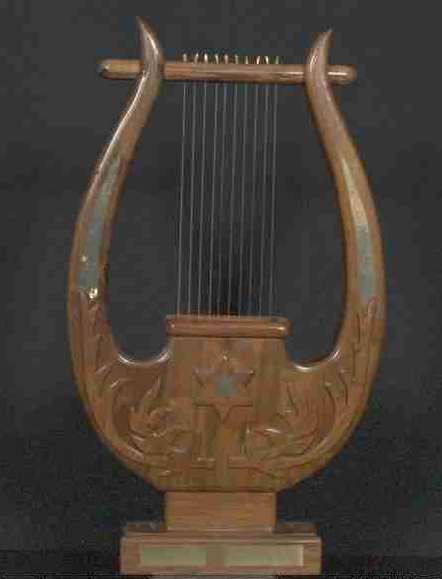 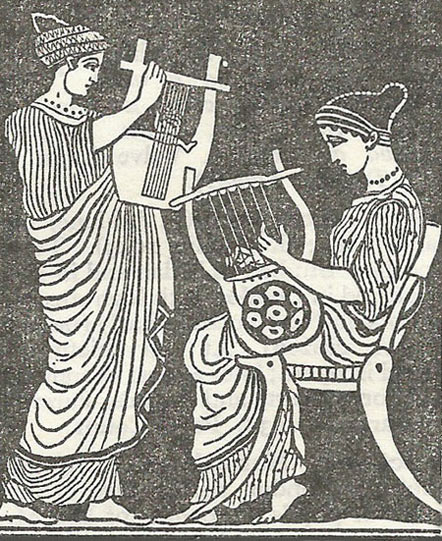 Lyre players. From a Greek vase in the Munich Museum.

A lyre is a similar to a small harp that was played by the ancient Greeks, Assyrians, Hebrews, and others. It was used by the Greeks to accompany plays and recitations. According to Greek mythology, the lyre was created by Hermes, son of Zeus, from a tortoise shell. Singing to the accompaniment of the lyre was thought to promote a sense of justice.

The lyre is formed of a soundbox, to which are attached two arms that run parallel to its surface. At their outer ends, the arms are joined by a crossbar, often called a yoke. The lyre's strings are attached to the crossbar and the part of the soundbox furthest from the crossbar.

The defining feature of the lyre is that the strings run in the same plane as the soundbox, whereas the strings of a harp run perpendicular to the soundbox. Most lyres are plucked with a plectrum and normally the strings only sound at their fundamental pitch (i.e., they are not stopped as on a violin).

Examples of the lyre have been found dating as far back as the third millennium BC. These were made from tortoiseshell, with animal hide pulled over the underside to create a soundhole. The arms are thought to have been made antelope horns and the strings from sheep gut, plucked with a horn plectrum.

The lyre remained a popular instrument during the Roman Empire but it subsequently declined in Europe. In Africa, though, it remains important, particularly in the eastern and north-eastern regions. Its use following the path of the Nile from Egypt to Lake Victoria.

The African lyres differ widely in their construction. The soundhole is made from gourd, wood, clay, and even still tortoiseshell, with an animal or reptile skin pulled over the main opening. The strings are even more varied: some are still made from gut but many are made from wire or nylon from any number of sources, including fishing nets and tennis rackets. They are plucked with either the fingers or a plectrum.

The number of strings on African lyres can range from five to 17, and they are primarily used to accompany a singing voice by playing in unison with it. It is rarely used as a solo instrument, but often features in ensembles.

The twentieth century has seen the development of a number of new lyres in Europe. Many of these are chromatic lyres, which use multiple strings arrange in rows. In spite of the use of modern materials in the strings, the lyre remains a quiet, though clear and beautiful, instrument. It has never attracted the attention of art composers and is only used in reconstructions of ancient music.