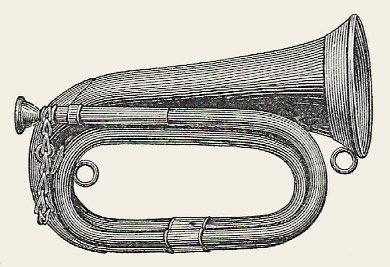 A bugle (Fr. bugle; Ger. flügelhorn; Ital. tromba) is a brass or copper instrument of treble pitch, with a wide tube of conical bore, moderate-sized bell, and cup-shaped mouthpiece. The bell is less expanded than the trumpet and the tube is shorter and more conical. This form gives it that peculiar, penetrating, and far-reaching sound which renders it well-suited for its sole purpose as a military signalling instrument.

It is made in the key of B♭, and its notes are the open notes of the tube -- C (below the stave), G, C, E, and G. It has also C, an octave lower, and B♭ and C above; but the first five are the only effective notes. It is provided with two rings, to which a a cord is attached for suspension to the shoulder of the bugler.

The Kent bugle, a bugle with keys to provide additional notes, was at one time popular as a leading instrument in brass bands. It was, however, difficult to play, and another modification, the valved, bugle, was introduced. Both were superseded by the cornet as a leading instrument, except in the purely bugle-bands of some of the rifle regiments. A valved attachment to fit on to the ordinary bugle, to enable it to be used as a band instrument, was also been invented, but little use was made of it.

Bugle sounds or calls, as the military signals called, are all written within the compass of five principal notes of the bugle. They vary in character from a single note G, meaning "right" (two Gs being "center", and three "left"), to the infantry "reveille", or morning call, which may be said to have some pretensions to being a musical composition, as it has five movements, a largo, allegretto, vivace, adagio, and presto.