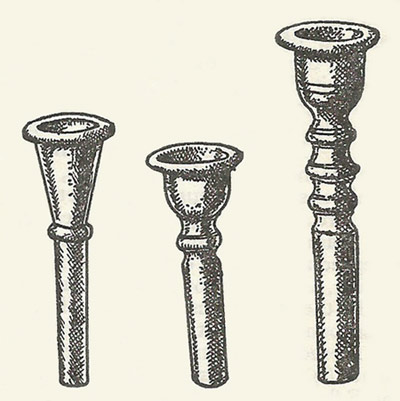 From left to right: horn, cornet, and trumpet mouthpieces.

Brass instruments are made of brass or some other metal alloy (coated with lacquer) and make a sound when air is blown inside. The musician's lips must buzz, as though making a "raspberry" noise against the mouthpiece. The vibrations of the lips cause air to vibrate inside the instrument, which in turn produces an audible sound. Brass instruments include the trumpet, trombone, tuba, French horn, cornet, and bugle.

Brass instruments differ less in their construction than the woodwind family. Like their cousins, they make use of both cylindrical and conical bores but very often both are used in one instrument. The major revolution in brass-instrument design was the invention of the valve in the early-nineteenth century.

All brass and woodwind instruments employ enclosed columns of air and rely on the properties of the harmonic series (the simultaneous pitches generated by the vibrations of air) combined with methods of altering the length of the air column to sound different pitches.

Brass instruments of wide bore, able to produce their fundamental mote, are 'whole-tube', that note being produced by the vibration of the tube's column of air as a whole, whereas those of narrow bore, whose lowest note is the second harmonic (i.e. the octave of the fundamental) are called 'half-tube', that note being produced by the vibration of the air column in two halves. Thus the tubas belong to the 'whole-tube' class and the trumpets, horns, and saxophones are considered to be 'half-tube' class. However, the distinction has lost a good deal of its validity today, owing to the virtuosity of modern players which enables the best of them to get a whole-tube vibration out of any instrument except the French horn.

A vital part of brass-instrument design is the creation of a stable column of air that has acoustic properties able to help with sound production. The most useful shapes for brass (and woodwind) instruments are the cylinder and the cone. In practice, most modern brass instruments are a mixture of the two. It is the extent to which a cone widens and the length of the tube that are largely responsible for the instrument's character. The potential difference can be heard by comparing a trumpet to a flugelhorn. The former – cylindrical except for the mouthpiece shank and flared-bell section – has a bright, clear sound. The latter – conical except for the tuning shank – has a mellow, dark sound.

The earliest trumpets and horns were simple tubes. They could sound only the pitches common to their fundamental pitch. To play higher tones, more energy was needed, which was tiring for the player. Gradually the tube's construction was modified, making sounding the higher partials easier, until it was possible to play a complete diatonic scale.

Western music, since the Renaissance, has largely been organized using a system known as equal temperament, which divides the octave into 12 equal steps called half-steps (or semitones). Although based on the properties of the harmonic series, equal temperament in fact irons out inconsistencies that occur with increasing regularity in the higher regions of the series .Consequently, brass instruments using only the harmonic series sounded out of tune on particular pitches. To counter this, instruments were made with different fundamental pitches to match the key of the music being performed. This was a cumbersome system, however, and meant the instruments lacked flexibility.

The invention of valves in the early-nineteenth century provided a solution, as they allowed access to increasing lengths of tubing. Additional tube lengths of a half-step, a whole step, and two-and-a-half whole steps could be combined to lower the pitch by a diminished fifth, in instruments of narrow bore, which do not generally sound their fundamental. This was enough to open out the entire chromatic range. In larger bored instruments, a fourth valve was necessary.

All modern brass instruments make use of valves. Even the trombone, which uses a slide to shift between pitches, makes use of a valve that both extends its range and increases its agility.

All mouthpieces are funnel-shaped – wide at the point of contact with the lips before narrowing to an aperture, which leads via a short tube to the main body of the instrument. The initial section of the mouthpiece is cup-shaped for trumpets, trombones, and tubas, and V-shaped for horns.

Lower-pitched instruments generally have wider mouthpieces to enable a wider lip aperture to generate energy. The horn's mouthpiece, however, is relatively narrow, but enables the sounding of extremely low pitches through its depth. The opposite is true for higher-pitched instruments – the mouthpiece of the piccolo trumpet, for example, is very shallow to help with the playing of higher pitches.


The role of brass instruments

The brass family is less expressive and flexible than its stringed counterpart. However, the twentieth century saw great strides in the use of brass instruments. In the orchestra they have become important particularly as a brass choir, able to add weight, color, power, and lustre to the strings or winds.

The growing virtuosity of performers, coupled with the increased demands of composers, have ensured that brass instruments in the orchestra are regarded as the equals of the woodwind and are more than capable of taking important solo lines. Much of this acceptance has come through jazz. The trumpet and trombone in particular have been vital to jazz but equally, jazz had shown how they can be used expressively and flexibly.

As chamber instruments they are less successful. Brass quintets and ensembles are popular, but there is little repertoire of high-enough quality adequate to display their abilities. The brass band, however, has been a central part of music making in England particularly. Since the early-twentieth century, the system of competitions has ensured that almost every town has a brass band; they remain a vital training ground for young musicians.