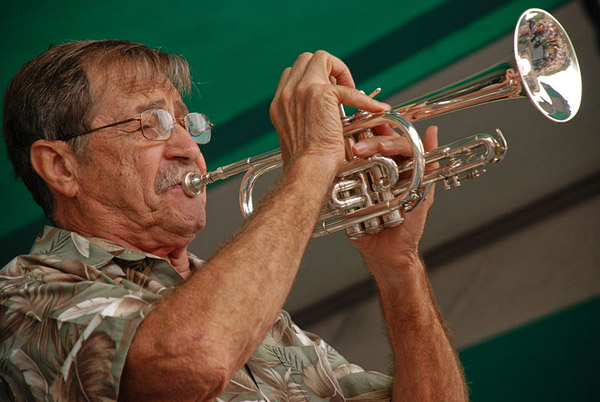 The cornet is very similar to the trumpet in looks and playing technique. It is thought to have been invented by the instrument maker Jean-Louis Antoine in the 1820s.

Antoine, who worked for the Parisian firm Halary, was one of a number of makers experimenting with the new valve technology that was revolutionizing brass instruments at the time. His idea of adding valves to the post horn rapidly caught on, and by 1830 coronet players around Paris were already making names for themselves.

The cornet looks like a compact version of the trumpet, with three valves located centrally, a mainly cylindrical bore, and a flared bell. Like the trumpet, it is most commonly keyed in B flat and has an accepted sounding compass of e to b", though many players add another third or fourth above that. There exists also a soprano cornet pitched in E flat. In both cases, it is a transposing instrument, its music being written a tone or minor third higher. Like both the trumpet and the horn, it operates on the harmonic series, filling in the gaps by the use of valves which, singly or in combination, lengthen the tube so giving new fundamentals of 1 semitone to 6 lower, and consequently as many new harmonic series. It uses a cup-shaped mouthpiece that fits snugly into the instrument's end. The particular design of the mouthpiece and the width of the bore give the cornet greater agility than the trumpet, and for that reason it was quickly adopted as an orchestral instrument where it would give a fully chromatic, mobile treble to the bass section. Double and triple tonguing are possible.

The cornet's sound is mellow and easy, with a tone between that of the trumpet and horn, but it lacks brilliance and bite. Consequently a pair of cornets was often used in conjunction with a pair of trumpets. Hector Berlioz (1803–1869), Cesar Frank (1822–1890) and Georges Bizet (1838–1875) were early champions of the cornet, and it was also used successfully by Edward Elgar (1857–1934) and Igor Stravinsky (1882–1971). The trumpet was slower to develop into a suitably flexible instrument, so cornets were often used as substitutes, particularly in the United States and Great Britain. Unfortunately, this proved to be a public-relations disaster, as the brilliance required for classical trumpet parts was entirely lacking from the cornet; it quickly developed a reputation as a feeble, dull instrument. Despite this, the cornet found its true vocation in brass-band music. The British band tradition now uses four separate cornet parts, as well as a high E part.

In the United States, the cornet has enjoyed considerable success in jazz. The strong French culture in New Orleans at the beginning of the twentieth century ensured that the instrument was used in the fashionable parade bands. Many well-known jazz performers learned their act on the cornet, including Louis Armstrong and Bix Beiderbecke. It has continued to be a popular instrument in jazz – and has even been heard in bop and free jazz.