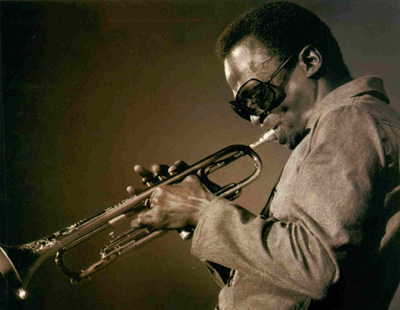 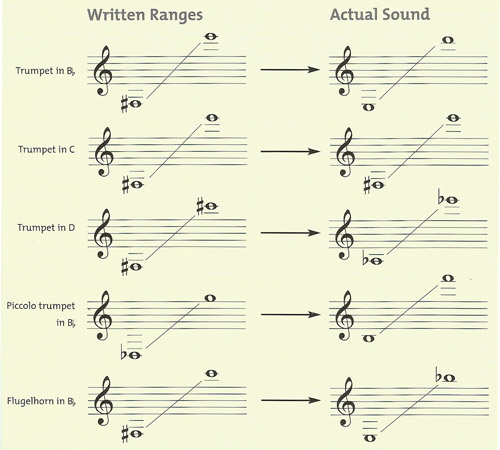 Ranges of different kinds of trumpets.

The trumpet is a brass instrument – one of the most ancient of instruments still played – formed of a long narrow straight tube, bent twice on itself, the last 15 inches tapering into a bell, and sounded by means of a cupped mouthpiece. The simple form of the instrument has long been used as a military signaling instrument. Its power and brilliancy have also made it a favorite with many composers of orchestral music.

Clear depictions of trumpets survive in Egyptian paintings and two trumpets – one of silver, the other of gold and brass – found in the tomb of Tutankhamun date back to at least 1350 BC. There are many examples of Greek and Roman trumpets which, like the Egyptian instruments, were made from a straight, conical tube flaring to a bell.

At the beginning of the fifteenth century, makers began to experiment with bending the trumpet. By making it into an "S" shape, it became more manageable without losing any sound quality. Surprisingly, the first slide trumpet was invented as early as the 1400s. An elongated mouthpiece section slid inside the main length of tubing so the player was able to alter the length of tubing, and thus the pitch.

All instruments are reliant on the harmonic series for their ability to play in tune. The brass family relies on it more than most, and, at this period, the trumpet was a continuous tube without finger holes or keys. The only pitches available to it were those of the harmonic series. The distance between pitches is large at the lower end of the harmonic series and it is only when the eighth partial is reached that movement by step can be achieved. By the mid-16th century, the trumpet was able to play up to the thirteenth partial, so a half scale of c", d", e", f", and g" was available. This high register became known as the 'clarion', after the small, high trumpet of the same name.

During the sixteenth century, the trumpet came to be revered above all other instruments. Royal courts often employed up to 20 trumpeters, and in 1548 Emperor Charles V declared that trumpeters were to come under his direct jurisdiction. Not surprisingly, given its royal status, the trumpet's aesthetics received considerable attention during this period. The mouthpiece section of the 'S'-shaped design was brought alongside the bell section so the familiar elongated spiral was achieved. The parallel lengths of the tube were bound together for strength, and colored tassels or other ornaments were often added.

By the first half of the seventeenth century, it was common for trumpeters to play up to the twentieth partial, and many were capable of ascending to the twenty-fourth or even higher. This gave composers a diatonic scale of an octave and a half to use – more than adequate for using the trumpet as a melodic instrument.

Until the late eighteenth century, the trumpet had only been capable of playing in the key of its fundamental and those closely related to it. Consequently players had to constantly change trumpets, or use crooks – additional lengths of tubing that could be placed to alter the trumpet's length. Then designs for a keyed trumpet appeared. Operated with one hand, leaving the other free to hold the instrument, there were between four and six keys, which opened up the entire chromatic range; however, this design failed to catch on.


The addition of valves

The real revolution in trumpet-making came in the 1820s, when valvs were added. Development in valve mechanisms during the 1810s had opened up the possibility of genuinely chromatic brass instruments that retained control of tone color over the entire range. In the 1820s, the first valve trumpets appeared and were soon taken up by composers.

Initially, the valve trumpet was pitched in F. The length of this instrument meant that works requiring agility were incredibly demanding technically. Alongside the trumpet had developed the cornet, which was pitched a fourth higher in B flat and was much more able to cope with tricky music. Even so it wasn't until the 1850s that the first B flat trumpets appeared – and not until the 1870s that they were accepted as standard.

By the beginning of the twentieth century, the trumpet had reached the form we know today. Most instruments are in B flat with three valves and a tuning slide. The bore begins cylindrically, but quickly becomes conical – and finally flares out to a bell. The cup-shaped mouthpiece sits snugly inside the opening of the trumpet and comes in many different forms. Broadly speaking, the shallower the cup, the more easily the high registers can be played.

There are also some other types of trumpet in use. The E flat trumpet, a fourth above the standard instrument, has a narrower bore and more penetrating tone. It is often used to play Baroque parts. The piccolo trumpet in B flat sounds an octave above the standard instrument, and the bass trumpet, which is also normally in B flat, sounds an octave lower than standard.


The trumpet in jazz

Central to the development of the trumpet in the twentieth century has been its use in jazz. It has been a key instrument since the style's inception and players such as Louis Armstrong, Dizzy Gillespie, and Miles Davis have taken the trumpet to new expressive levels.