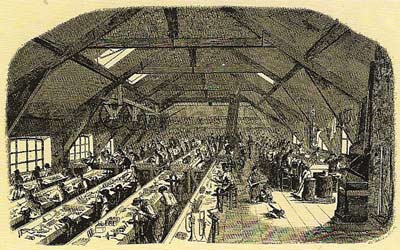 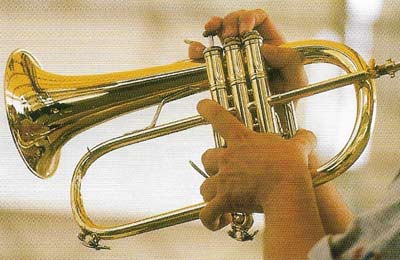 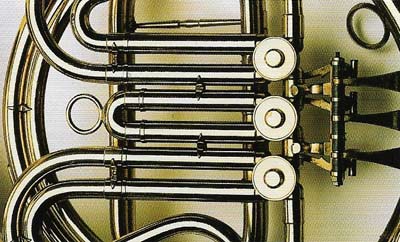 Close-up view of the rotary valves on a French horn. Rotary valves were invented by Joseph Riedel in 1832.

In 1815 a notice appeared in the Allgemeine Musikahsche Zeitung that was to change the evolution of the brass instrument forever. Heinrich Stolzel, a 38-year-old horn player in the orchestra of Prince von Pless in Upper Silesia, announced that he had produced a horn on which a scale of nearly three octaves could be achieved by means of two airtight valves that were pressed down by "piano keys" and returned by springs. Although Stolzel is often regarded as the sole inventor of the valve, it is believed that he was ably assisted by his fellow musician Friedrich Blühmel.


Function of the valve

The purpose of the valve is to admit vibrating air into, or exclude it from, auxiliary tubing of sufficient length to lower the basic pitch of an instrument by a certain musical interval. The length of this tubing must be in proportion to that of the main tubing; the length for a whole tone is about one-eighth of the whole and that for a semitone about one-fifteenth. On a three-valved instrument the depression of the first valve lowers the pitch of the instrument a semitone; depression of the second lowers it a whole tone; and the third an extra semitone. This combination, with different harmonics obtainable by altering the pressure of the lips, allows a complete scale to be played.

Once the valve has been depressed and released it is instantly returned by a spring; the most common method is to have the spring push the valve back up from the bottom.

Although valves are traditionally made of brass, sometimes plated with silver or nickel, other materials have been used. The Boosey "Solbron" was made of bronze while, for its tubas, the Swiss Hirstbrunner Company produces the "Trypen" valve, which is made from a combination of brass and plastic. The most efficient valves, however, arc those made from "Monel", which is a copper-nickel alloy.

In the years between 1820 and 1840, various experiments resulted in the production of two different types of valve: piston and rotary. In 1835 Wilhelm Wieprecht produced his robust short-stroke Berliner Pumpen valves. These had horizontal passageways and were used on all types of brass instruments. In 1839 this was improved upon by Etienne-François Périnet, who made a lighter and narrower valve, in which the coquilles (the holes that allow the passage of air from one side of the valve to the other) were positioned obliquely in the piston. The main advantage of this valve was that it could be worked faster and the air column moved around a curve instead of, as with Wieprecht's valve, around a 90° bend.

Today, many euphoniums and tubas have four valves. The extra valve not only helps to keep the instrument in tune, but also allows the musician to play lower harmonics. Most makers place the extra valve at the back of the instrument, where it is operated by the first finger of the left hand. However, the Yamaha Company of Japan positions its four valves together, parallel with the bell, and all are operated by the fingers of the right hand.

Although several people experimented with rotary valves, Joseph Riedel of Vienna produced the design that is used in modern horns. Riedel's valve, which was patented in 1832, has two passageways that pass through the rotor, one on each side of a central spindle. When the valve is operated the cylinder rotates through 90°, directing the air into the valve tube much as water flows through a tap.