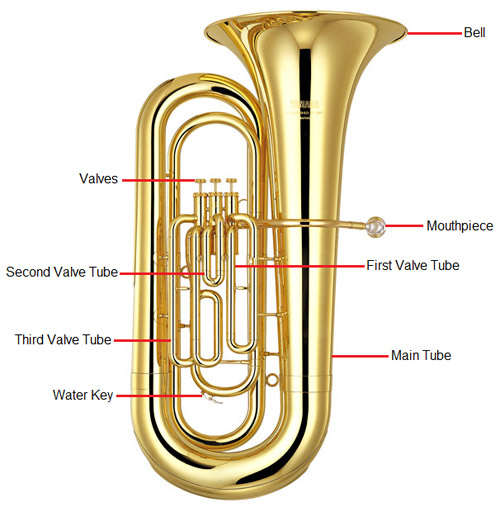 Labeled diagram of a tuba. 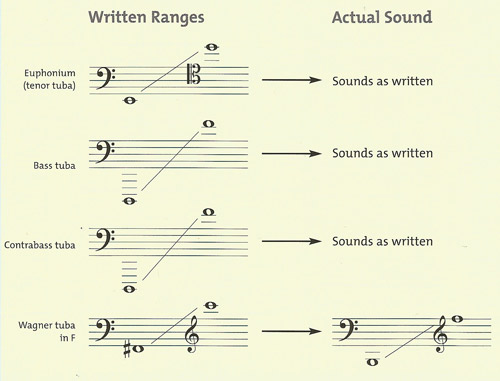 The ranges of different kinds of tuba.

The tuba is essentially a large, valved bugle, designed to take the bass part in an orchestra or band. Like the trumpet, it is sounded by buzzing the lips into a mouthpiece. It is conically bored, like the horn, and consequently has a smooth, velvety sound.

The tuba is a youngster among brass instruments; it is one of a number of instruments developed in the furiously inventive atmosphere of the early-nineteenth century. The invention of the piston valve around 1815 breathed new life into brass-instrument design. Ten years later an entirely new range of tenor and soprano instruments had appeared, but the valves were too long to work adequately at the scale required for a lower-pitched instrument. In 1827, however, the self-proclaimed inventor of the valve, Heinrich Stolzel, devised a shorter piston valve that was suited to bass instruments.

By 1835, the first tuba had been created. Prussian bandmaster Wilhelm Weiprecht and instrument-maker J. G. Moritz, worked together on a design for a bass tuba in F (playing a fundamental of F') with five valves. Their instrument soon caught on and by the mid-1840s there were tubas of all shapes and sizes, including a version using the rotary-valve system developed by J. F. Riedl in Vienna. The saxhorn family designed by Adolphe Sax in the 1850s clearly shows the influence of the tuba.


The tuba in the orchestra

Up to the early-nineteenth century, the bass instrument in the brass section of the orchestra had been the keyed ophicleide. While this had proved successful, it had significant drawbacks - including loss of tone quality on some notes and a lack of power compared to the higher brass in use by this time. It also had an effective compass that only reached as low as C – already regarded as inadequate by many musicians.

The tuba solved all these issues and quickly became a regular orchestral member in Germany. In the rest of Europe, however, it was slower to catch on, despite the advocacy of the ever-adventurous Berlioz. In France and England, the change from ophicleide to tuba only took place after the 1870s; players in some orchestras were required to be skilled on both instruments right up to the turn of the century.

The E♭tuba (often known as EE♭, or double E♭, to make clear its low fundamental of E♭'), which remains the most common orchestral tuba today.

In the United States, an even lower tuba in double C (with a fundamental of C') is used. This is particularly useful for playing in the sharp keys that form the majority of the orchestral repertoire. There is also a double B♭ tuba which is normally seen only in bands.

In France, a completely different instrument is used. Pitched in C (with a fundamental of C), it is an octave higher than the standard US model. It uses a system of six valves – three for each hand – to reach the lowest notes and because it is relatively slight, it is able to play significantly higher than its deeper cousins. The famous solo in Ravel's orchestration of Modest Mussorgsky's (1839–81) Pictures as an Exhibition (1874) was written for just this instrument.

In all sizes, however, the tuba's conical bore is coiled in an elliptical shape, with the flared bell pointing upwards and the mouthpipe turning in to the player. There have been experiments with bells pointing forwards, away from the player, but these have all adversely affected the tuba's timbre and have only been adopted in marching bands. Smaller tubas can be held in the arms, but larger models are normally supported on the player's lap. The mouthpiece is cup-shaped, wide and deep. Both piston and rotary valves are used; the latter are essential in the widest-bored tubas since the pistons cannot operate quickly enough to allow necessary agility.

Although there are a number of effective concerti for the tuba, most notably by Ralph Vaughan Williams, the full extent of the tuba's capabilities are rarely displayed. Skillfully played, it is a surprisingly flexible instrument, able to produce long, singing phrases.

The euphonium is a tenor tuba in B with a fundamental note of B'. It was designed in 1843, shortly after the invention of the original tuba. Its name has its roots in the Greek euphonos, meaning 'sweet-voiced'. Generally made with four valves, the euphonium has a compass extending from F' to b♭' – potentially higher.

The euphonium's introduction to the orchestra came by accident. Richard Strauss's tone poem Ein Heldenleben was scored for Wagner tuba, but the conductor at the premiere swapped the Wagner tuba for a euphonium with great success. The euphonium has subsequently become a regular visitor to orchestral repertoire, where it is normally played by a trombonist.

The euphonium's most important role had been in bands, where it takes the top line of the bass section and fulfils a vital melodic role.

E♭or B♭ (with fundamentals of E♭' and B♭" respectively). Its unique feature is being coiled in such a way that it encircles the player, resting on the left shoulder and passing under the right arm with the bell pointing forwards above the head. It was derived from the earlier helicon by the bandmaster John Philip Sousa, composer of The Stars and Stripes Forever, and first made in the 1890s.

Especially designed for Wagner's operatic Ring cycle, the Wagner tuba is an elliptically coiled instrument from which the bell emerges at the top at a slight angle. It is conically bored, like the tuba, and has four rotary valves. The Wagner tuba's mouthpiece, however, is more like that of a French horn and in the orchestra it is performed by horn players. Intended to play a role in the texture by lying between the horn and trombone lines, it has never caught on as an orchestral instrument, mainly due to its slightly dull attack and wayward intonation. Nevertheless, it was also used by Strauss and Stravinsky, and a number of film composers.