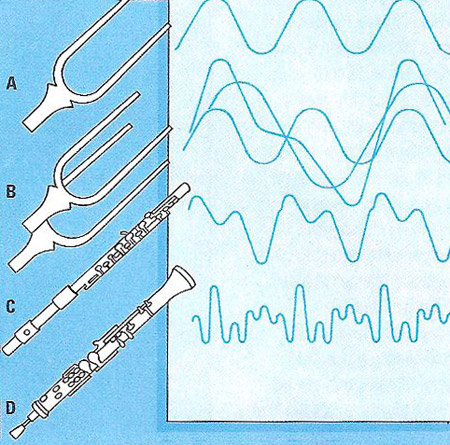 A tuning fork vibrates, producing form of a single pitch – its fundamental frequency (A). A more complex sound pattern will arise when two forks are struck together (B). The fundamental pitch of the vibrating column of air in a flute is enhanced by other shorter wavelength sounds which are multiples of the fundamental (C). Woodwind instruments have a more reedy sound because of the interaction of all these different frequencies heard together (D). 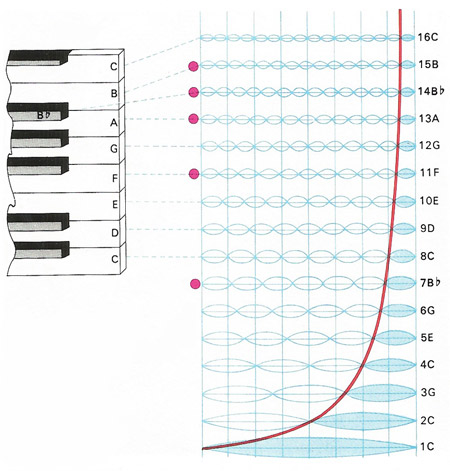 Harmonics result from simultaneous vibration of smaller and smaller divisions of a vibrating string or air column. In the first 16 harmonics five (marked with dots) are out of tune.

The tuning fork sounds practically only its own fundamental, which accounts for its colorless tone quality. When a note is played on the violin, however, many simultaneous harmonics occur, which color the tone.

While harmonics, including the fundamental, are normally heard in combination some of them can, on some instruments, be separately obtained. For example, by blowing in the right way, a brass tube, instead of producing its first harmonic (fundamental), can be made to produces its second, third, or some other harmonic. By lightly touching a string, or a length of string (i.e., a stopped string), at its center and then plucking or bowing it, it can be made to produce its second harmonic; by doing the same at a third of its length it will, similarly, produce its third harmonic. Natural harmonics are those produced from an open string; artificial harmonics those produced from a stopped string.

At one period the only notes obtainable from a horn or trumpet were the harmonics that belonged to the fundamental note of its length of tube. Crooks and shanks were introduced which, inserted in the instrument, lengthened it and so altered its fundamental note and, hence, its whole harmonic series. (A crook is a curved piece of tube and a shank is a straight one; their functions are identical.) Whilst any particular crook or shank was in use the player was still limited to the relevant harmonic series with all its gaps: then valves were introduced, in place of the crooks or shanks, and the length of the tube could be immediately changed and rechanged, thus making it possible to change the whole harmonic series without delays and making easily and rapidly available any note whatever that was required by picking a harmonic series in which it conveniently occurred. On the woodwind, similar changes in effective length are secured by covering or uncovering side-holes in the tube by the fingers.