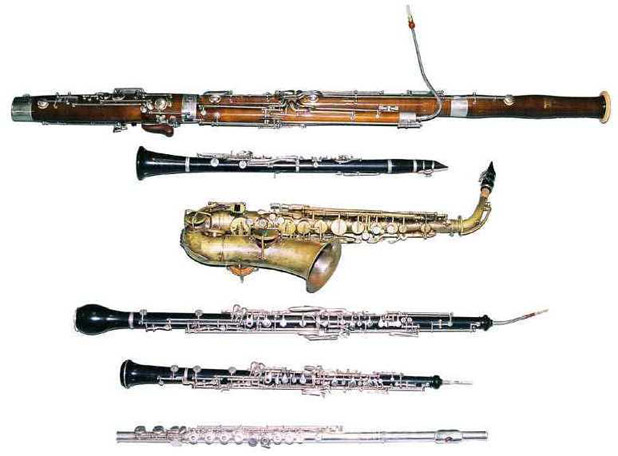 Some members of the woodwind family. 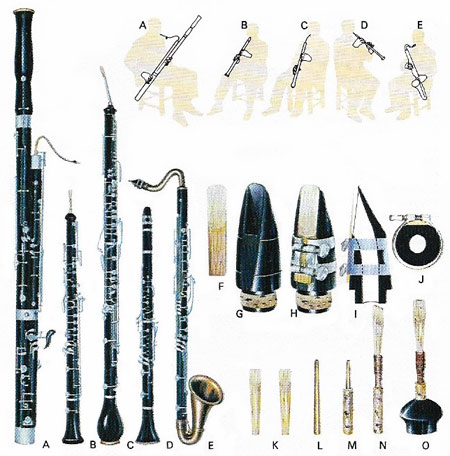 Reed woodwinds, shown in appropriate playing positions, are the bassoon (A), oboe (B), cor anglais (C), clarinet (D), and bass clarinet (E). The clarinets have a cylindrical bore and are played by means of a single reed (F) fixed over a chamber in the mouthpiece (G) and secured by a ligature (H), shown in transverse (I) and cross-section (J). The oboe family (A, B, and C) is played by blowing through two pieces of reed (K) fitted roud a brass tube (L). The tube is placed in a cork cylinder (M) with the twin reeds whipped round it (N) (as shown in cross-section) with the complete double reed position ()).

Non-reed woodwind instruments in the orchestra were originally of two kinds: recorders, played by blowing vertically into the mouthpiece, and flutes, played horizontally. The second group is a regular component of the modern orchestra. It includes the piccolo (A), concert flute (B), and bass flute (C). Recorders are still used in orchestras where their characteristic tone color is required in producing the authentic sound of the Baroque orchestra. 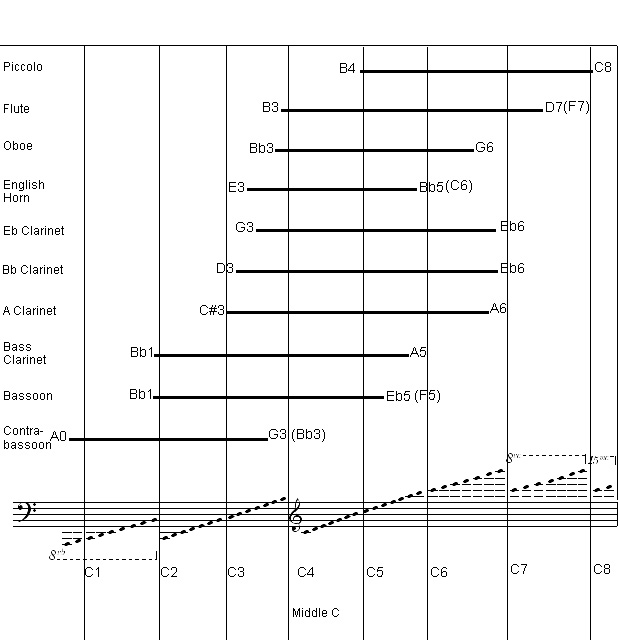 Woodwind instruments produce sound when air is blown through them. The air might be blown across an edge, as with a flute, between a reed and a surface, as with a clarinet, or between two reeds bound together, as with a bassoon. The sound is produced by the vibration of air inside the instrument.

Other members of the woodwind family include the piccolo, recorder, and oboe. The odd-one-out member of the family, the saxophone is technically considered a woodwind instrument even though it is made of brass, because it is sounded using a reed rather than a mouthpiece.

All woodwind instruments sound different pitches in the same way as brass instruments do – using enclosed columns of air, based on the principles of fundamentals and overtones.

The prime concern in development of the woodwind family was creating bodies to encase columns of air that were stable and whose overtones were in tune. Different shapes of air columns have different acoustic properties; only with a suitable shape can a good quality be generated. Conical tubes with a tiny aperture at the thin end produce the best results, and this form can be seen in most woodwind instruments, including the oboe, bassoon, and saxophone.

Second to the conical tube is the cylinder. These can be open at both ends, such as the flute. A cylinder open at one end but closed at the other has unusual acoustic properties, the most audible of which is a predominance of low harmonics. The clarinet is constructed in this way.

The sound of a woodwind instrument is projected mainly from the finger holes around the lowest depressed key. The function of the bell is mainly to reflect sound waves back into the instrument rather than to distribute them into the air. This is a vital function, however, and considerably influences the sound.

A tube open only at the mouthpiece and bell ends can only sound pitches from the harmonic series. In order to sound additional notes, it is necessary to alter the tube's length. This was first achieved by adding finger holes. With all the holes covered, the tube's fundamental pitch was sounded; uncovering the lowest hole effectively shortened the tube, making the pitch higher. By gradually uncovering the holes from the bell towards the mouthpiece it was possible to play a range of pitches – a system still used with some instruments.

The positioning of the finger holes was vital to their success and it was quickly discovered that some combinations of open and closed holes were more effective than others. The positions and number of holes were limited, however, by the size of player's hands and the number of fingers.

Even with sophisticated keywork, the basic compass of a woodwind instrument might seem to be limited, since the tube cannot be continually shortened and still produced a sound of any significant quality. This situation is overcome by using the overtones naturally present in the instrument's fundamental pitch.

Sounding overtones can make the instrument unstable and for this reason a 'speaker' or 'octave' key is used in modern woodwind. This key opens a small hole near the mouthpiece, which slightly alters the behavior of the air column and allows the overblown notes to sound more easily.

Perhaps the clearest distinguishing factor between the different woodwind instruments is the means by which the sound is generated. Clarinets and saxophones use a single reed, oboes and bassoons use a double reed, and flutes and whistles use an edge.

The method of sound production has a clearly audible effect in the instrument's timbre. It also affects articulation. The double reed, for instance, requires considerable energy to make an initial attack; quick repeated articulation is therefore arduous and runs the risk of spoiling the sound. The edge-blown instrument, however, requires very little energy initially and is ideally suited to fast passages of music.

Modern woodwind instruments are individually less colorful and less flexible than their string colleagues. Their predecessors were generally raucous, and were most closely associated with outdoor celebrations and military bands.

Nevertheless, through continued refinements, this family of instruments has come to form a major part of western musical culture. Their presence in the orchestra is now essential for the provision of melodic color and textural variation. These instruments reached maturity in the twenyieth century, and increasing demands have been made on them over the past 100 years.

As solo instruments and in wind ensembles woodwind has had some success. In military bands they have remained central components, and in jazz some instruments – notably the saxophone and the clarinet – have played critical roles.